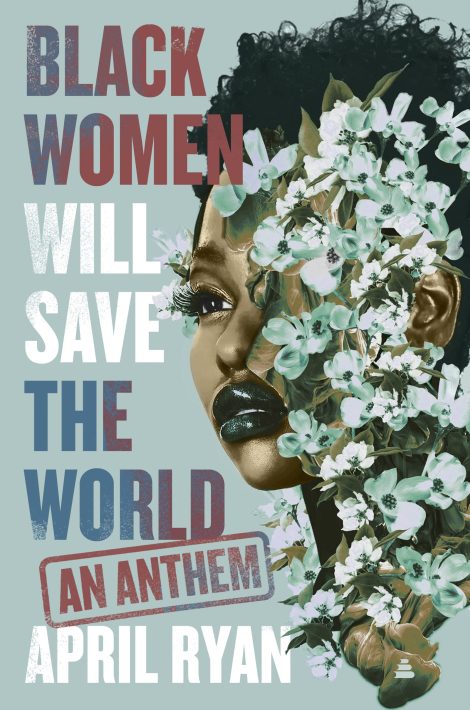 BLACK WOMEN WILL SAVE THE WORLD

“I am keenly aware that everyone and everything has a story,” April D. Ryan acknowledges. “Also, I have always marveled at Black women and how we work to move mountains and are never really thanked or recognized.” In Black Women Will Save the World, she melds these two truths, creating an inspiring and heart-tugging portrait of one of the momentous years in America, 2020—when America elected its first Black woman Vice President—and celebrates the tenacity,

“I am keenly aware that everyone and everything has a story,” April D. Ryan acknowledges. “Also, I have always marveled at Black women and how we work to move mountains and are never really thanked or recognized.” In Black Women Will Save the World, she melds these two truths, creating an inspiring and heart-tugging portrait of one of the momentous years in America, 2020—when America elected its first Black woman Vice President—and celebrates the tenacity, power, and impact of Black women across America.

From the beginning of the nation to today, Black women have transformed their pain into progress and have been at the frontlines of the nation’s political, social, and economic struggles. These “Sheroes” as Ryan calls them, include current political leaders such as Maxine Waters, Valerie Jarrett, and Kamala Harris; Brittany Packnett Cunningham, LaTosha Brown, and other activists; and artists like Regina King. Combining profiles and in-depth interviews with these influential movers and shakers and many more, Ryan explores the challenges Black women endure, and how the lessons they’ve learned can help us shape our own stories. Ryan also chronicles her personal journey from working-class Baltimore to the elite echelons of journalism and speaks out about the hurdles she faced in becoming one of the most well-connected members of the Washington press corps—while raising two daughters as a single mother in the aftermath of a messy divorce.

It is time for everyone to acknowledge Black women’s unrivaled contributions to America. Yet our democracy remains in peril, and their work is far from done. Black Women Will Save the World presents a vital kaleidoscopic look at women of different ages and from diverse backgrounds who devote their lives to making the world a better place—even if that means stepping out of their “place.”

White House Correspondent April Ryan has a unique vantage point as the only Black female reporter covering urban issues from the White House—a position she has held since the Clinton era. April can be seen almost daily on CNN as a political analyst and is the Washington, DC, Bureau Chief for The Grio. She has been featured in Essence, Vogue, Cosmopolitan, Elle magazine, and other top publications, has served on the board of the prestigious White House Correspondents Association, and is an esteemed member of the National Press Club. April is the author of the award-winning book, The Presidency in Black and White, and At Mama’s Knee: Mothers and Race in Black and White. She lives in Baltimore County, Maryland.

“Forceful and inspired, this is a rousing praise song for strong Black women.” — Publishers Weekly

“An impassioned celebration of Black women and their roles in transforming the nation.” — Kirkus Reviews

February 25, 2022, 2 p.m., in the Cross Hall of the White House. The world watched to mark herstory: the very first nomination of a Black woman to the United States Supreme Court.

I was at home in icy Baltimore, working on various stories to commemorate the historic nomination. I was also trying to wrap my mind around the fact that a colleague of mine—a white man—was given the story to break.

As I gazed upon the televised images of Judge Ketanji Brown Jackson and Vice President Kamala Harris—two powerful, superbad Black women standing behind the president of the United States—I thought about the scores of Black women who have fought, are fighting, and will fight to break into the ultimate power structure, a feat that had eluded us for so long. I fought back tears. And anger. Tears for the triumph. Anger for its price.

President Joseph Biden said of Judge Jackson that she was chosen for her “legacy of excellence and decency.” He called out her “strong moral compass” and said he believed that her ability “to stand up for what’s right” was what the court needed today.

The optics—Judge Jackson standing next to Vice President Harris just a year after Harris’s historic ascension to the second-highest office of the land—showed the entire world that Black women were no longer just heard but seen.

As she savored the moment, Judge Jackson remarked, “I thank God for delivering me to this point. One can only come this far by faith.”

Today’s generations of Black women have arrived here if only by faith—a faith that we keep and a faith kept by our ancestors in spite of the unfathomable pain, torment, and exclusion in centuries past.

All my life, I have known and embraced—even if, at times, unconsciously—the undeniable fact that Black women will save the world.

How could I not believe that essential truth? I did not have to go far.

As a child, I watched my amazing mother move mountains with grace and conviction. She raised me from the cradle to be strong and wise. She showed me how. My mother always held her ground: She created space for me to grow up safe and secure in who I was, while lifting up the young people in our community—a community of all ages, races, and genders—by helping them excel and achieve their best life. She was, in every sense of the word, magic.

For Black women reading this, that’s a familiar sentiment. Magic. Well, we are magic. Juggling it all and helping everyone, including and especially the times when no one notices. Black women: we make the extraordinary ordinary.

This has been unfailingly true throughout our history. As I grew older and learned about our past, the remarkable leadership qualities of Black women circled back again, and again, and again. Black women have played an extraordinary and largely unacknowledged role in the arc of our country.

In the Revolutionary War, Black women were wildly effective spies, often working from behind enemy lines, unseen and unappreciated as house and field workers, and often enslaved, fighting for that nascent idea of America while keeping the faith that one day we might be free too—that one day we might arrive.

Throughout the nineteenth century, as we continued to toil and drive forward the nation’s economy in the North and the South, we organized, invisible to most, a movement for the abolition of slavery, meeting in churches and living rooms and community gatherings. We served as conductors on the Underground Railroad, delivering one soul after another to freedom.

Our efforts roused the nation’s conscience and when America plunged into Civil War, we were among the first to volunteer as spies, soldiers, and nurses—even though our freedom, fully and truly, wasn’t on the docket.

We have always been the first to answer the call. And through it all, we have kept the faith.

In the long decades that followed the Civil War’s end, a time marked by political, social, and economic backlash characterized by the laws of Jim Crow, segregation, economic subjugation, and violent lynchings, we never stopped pushing and fighting for what is right. The women’s right to vote. The right to sit at the front of the bus. The right to a quality education. The right to our bodies. The right to fully participate in this American Experiment.

And through it all, we have kept the faith.

When Judge Jackson said, “I thank God for delivering me to this point. One can only come this far by faith,” heavy tears fell down my cheeks.

I knew what she meant. We knew.

After all, Black women make the extraordinary ordinary. We drive change in a society that wasn’t built for us in order to make it better for all of us.

We do this, instinctually, because it is always what needs to be done.

Few of us will reach the acclaim and historic heights of Judge Jackson or Vice President Harris, but the contributions of all Black women matter. We deserve acknowledgment because invariably it is our efforts—our faith—that propel the American project forward. For me, this book is a love letter to Black women everywhere. I see you. And I thank you.

Look around your community as we fight through this horrific pandemic. Contemplate the caretakers, the frontline workers, and, perhaps, even your local elected officials—the Black women of our society stepping up to serve, to help, to lend a hand when it’s needed most. Again.

All of us have been affected by the extraordinary efforts of Black women during this historic time of trial. And we all have stories and observations about why Black women matter.

I think about my cousin Melba, a restaurateur in Harlem, and the ways she fed thousands of hungry people and hundreds of first responders, day after day, week after week, “pay only what you can,” when the COVID-19 vaccine was all but a pipe dream, just a protein on a screen.

I reflect on the creative vision of our role models like Beyoncé, who belts out, “Who run the world? Girls!”—a national anthem for Black women that reminds us that “my persuasion can build a nation.” An anthem repeated over and over as a new generation of Black girls internalize their greatness and see it reinforced in leaders like Karine Jean-Pierre, President Biden’s press secretary as of spring 2022. Jean-Pierre speaks from the presidential lectern for all the world to see, wisely guiding public opinion as the nation navigates war overseas and a deadly virus here at home.

Watching Jean-Pierre from the lectern, I am elated: there isn’t a day that goes by when I do not drink it all in. One can only come this far by faith.

I imagine, with awe, the African women in London who are raising money for the Black migrants fleeing Ukraine. They remind me that we are a global movement—Black women—fighting for what’s right wherever we find ourselves.

In the quiet moments, I remember the heartache of 2016: the painful elevation of bigotry, the threat to democracy. I can still feel in my gut that heavy sense of loss that consumed millions of Americans—and our hopelessness. Our despair. And then I remember that we, Black women, fought back to pull the country back from the brink. We won the special election in Alabama. And then the United States Senate races in Georgia. And then the presidency.

Which brings us to this moment. Right now. Unlike in other chapters of American history, our presence is not just felt, our voices are not just heard, but we are seen. We are powerful. We have arrived.

The extraordinary made ordinary. That’s what we do. All in a day’s work.

The only thing missing now is a conversation about who we are, how we lead, the price we pay, and what’s next for us and a country forever changed by our ascent. I have had the privilege to talk to Black women and

study the enormous contributions of Black women today and stretching back through time. My fervent hope is you will find these women as inspiring as I have. Most important, I hope their example pushes you, indeed all of us, to elevate and exalt Black women as the sheroes and world shapers they are and always have been.

We are undeniable now. It’s time.