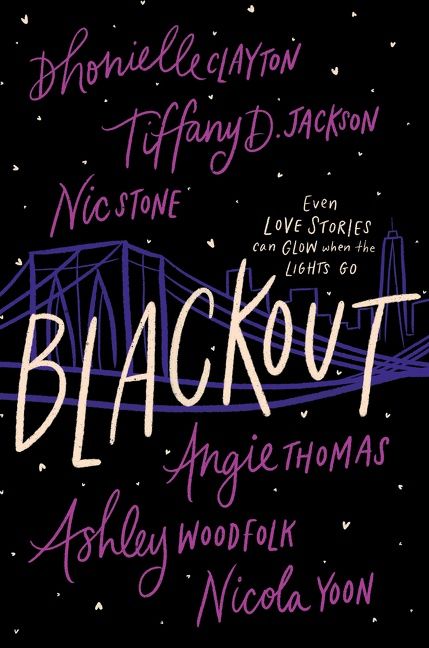 Six critically acclaimed, bestselling, and award-winning authors bring the glowing warmth and electricity of Black teen love to this interlinked novel of charming, hilarious, and heartwarming stories that shine a bright light through the dark.

A summer heatwave blankets New York City in darkness. But as the city is thrown into confusion, a different kind of electricity sparks…

And maybe the beginning of something new.

Six critically acclaimed, bestselling, and award-winning authors bring the glowing warmth and electricity of Black teen love to this interlinked novel of charming, hilarious, and heartwarming stories that shine a bright light through the dark.

A summer heatwave blankets New York City in darkness. But as the city is thrown into confusion, a different kind of electricity sparks…

And maybe the beginning of something new.

Beloved authors—Dhonielle Clayton, Tiffany D. Jackson, Nic Stone, Angie Thomas, Ashley Woodfolk, and Nicola Yoon—celebrate the beauty of six couples and the unforgettable magic that can be found on a sweltering starry night in the city.

Dhonielle Clayton is the New York Times bestselling author of The Belles series and the coauthor of the Tiny Pretty Things duology, which was made into a Netflix original series. She is COO of the non-profit We Need Diverse Books, and the owner of CAKE Literary.

Tiffany D. Jackson is the critically acclaimed author of Allegedly, Monday’s Not Coming, and Let Me Hear a Rhyme. A Walter Dean Myers Honor Book and Coretta Scott King–John Steptoe New Talent Award winner, she received her bachelor of arts in film from Howard University, earned her master of arts in media studies from the New School, and has over a decade in TV and film experience. The Brooklyn native still resides in the borough she loves.

Angie Thomas‘s award-winning, acclaimed debut novel, The Hate U Give, is a #1 New York Times bestseller and major motion picture from Fox 2000. She is also the author of On the Come Up and Concrete Rose.

Ashley Woodfolk worked in children’s book publishing before becoming an author full-time. Her novels include the highly acclaimed The Beauty that Remains and When You Were Everything.

Nicola Yoon is the #1 New York Times bestselling author of Everything, Everything and The Sun Is Also a Star, both of which have been adapted into major motion pictures. She is a National Book Award finalist, a Michael L. Printz Honor Book recipient, and a Coretta Scott King New Talent Award winner. She’s also co-publisher of Joy Revolution, a Random House young adult imprint focused on love stories starring people of color.

“Young Black love glows throughout this collaboration by Dhonielle Clayton, Tiffany D. Jackson, Nic Stone, Angie Thomas, Ashley Woodfolk, and Nicola Yoon, which follows six couples through a summer blackout in New York City… As each teen makes their way home, this joyful collaboration brings a necessary elation to stories of Black love, queer love, and alternative forms of affection, all of which are all tenderly highlighted in these narratives.” -Publishers Weekly (starred review)

“There’s plenty to smile, sigh, or swoon at here, and readers will happily keep the lights on to see these charming romances to the end.” -Bulletin of the Center for Children’s Books (starred review)

“Rich with intersectional queer representation and light with banter, humor, and even philosophy, this beautiful collaboration hits different from your typical romance novel, ultimately evoking the warmth of greater connection, community, and belonging.” -Booklist (starred review)

“Working together to deliver a fantastic mix of humor and romance, these authors offer something fun and lighthearted that is welcome during the continuing pandemic and that will bring joy long after it’s over.” -Kirkus Reviews

1. What gets in the way of relationships? Pride? Fear? Miscommunication? Change? Use examples from the stories to discuss where characters make brave, smart, unhealthy, or cowardly moves in their relationships.

2. Looking at the patterns in these stories, what do you think are some keys to positive, healthy relationships?

4. Tristán tells Lana he “never thought you had space to love me back” (p. 18). Mr Wright advises Kayla to give her heart “space to speak” (p. 197). What do you think they mean? How can you make space for others? For yourself? Discuss ways in which space can help or hurt a relationship.

6. Discuss how the setting—New York City in a blackout—affects the action, the emotions, and the internal and external journeys of the characters. What happens in this setting that might not have happened without the blackout?

7. What is the source of JJ’s fear about coming out? What do you think it would take for sports culture to change? If you were Tremaine, do you think you would forgive JJ and want to be with him?

8. Discuss the idea of commitment in light of the reality that people change. When Grace realizes that she has, in fact, changed, she stops blaming her ex-boyfriend for ending their relationship. Is it ever fair to expect your partner not to change? What kinds of changes are too great for a relationship to sustain?

9. Seymour and his friend had a falling out because their paths diverged. Grace and Seymour have a lot in common, but their paths are also quite different. What do you think it will take for their relationship to work out?

11. What role do family members—especially parents and grandparents—play in the characters’ stories? To what extent do you believe family backgrounds influence future relationships? How?

12. Is love a process or an outcome? Use examples from the stories to support your point of view.

IT’S A HEATSTROKE kind of day. One where bad stuff happens. Tensions matching the temperature make people do stupid things in a city full of millions. On days like this, you wouldn’t catch me dead outside. I’d be huddled in my room, next to the air conditioner, streaming movies, with an iced tea and a turkey on wheat. So when the train doors open on the hot-ass platform, blowing sticky air in my face, I have second thoughts about the new job.

Out of the station, I’m surprised to see so many people on the street, the Apollo Theater’s sign gleaming in the brutal sun. If this was my film set, we’d be wrapped, or I’d switch to night shoots. Concrete melts the bottom of my sneakers as I run down 125th Street, train delays setting me back a whole ten minutes. The MTA doesn’t give a damn about being on time, even during a heat wave. Now I’m going to be late. Well, I’ll be on time but that’s the same as being late! Dad always says, If you’re early, you’re on time; if you’re on time, you’re late. That’s why I never chilled in the halls between classes, was always first in my seat minutes before the second bell would ring. Think that’s why all the teachers liked me. It showed I respected them. Even Mr. Bishop, and no one hated gym more than me.

My dress is soaked by the time I take the elevator up to the fourth floor. I don’t think I’ve ever sweat this much in my entire life. But they said I needed to drop off my paperwork before Monday’s training.

Yes, HR orientation training. For a legit job. Your girl is the new office assistant at the Apollo corporate headquarters. My advisor hipped me to the opening. Working for the most famous Black theater in New York, known for the start of such music superstars like Michael Jackson, Mariah Carey, and Stevie Wonder, will have me kiki-ing with elite celebrities. Good practice for when I become a big-time director.

Sure, it’s all the way in Harlem, no less than an hour and change by train from Brooklyn. But it puts plenty of distance between Bed-Stuy and me all summer long.

I don’t want to be around there anymore. Not since . . . it happened. Not since “we” became a him and her, then a me.

The acceptance email said to arrive at five fifteen, and since this was going to be the first time my coworkers would see me, I put on my new yellow-and-blue baby doll dress, bought thanks to some graduation funds. You know what? I’m going to buy a whole new wardrobe before school, all to match my new life as I leave my old one behind. Might even start introducing myself as Tam instead of Tammi. Who would know the truth? It’s not like anyone’s coming down to Clark Atlanta with me. I’ll be there . . . alone.

It wasn’t supposed to be like this, I think as I approach the reception desk. “We” had different plans. Promises made. But there’s no longer a we, and it’s time I learn how to live my life without him.