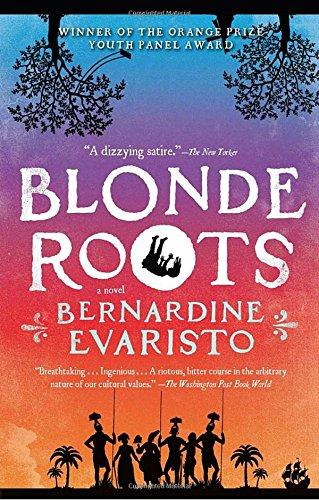 What if the history of the transatlantic slave trade had been reversed and Africans has enslaved Europeans? How would that have changed the ways that people justified their inhuman behavior? How would it inform our cultural attitudes and the insidious racism that still lingers today? We see this tragicomic world turned upside down through the eyes of Doris, an Englishwoman enslaved and taken to the New World, movingly recounting experiences of tremendous hardship and the dreams of the people she has left behind, all while journeying toward an escape into freedom.

A poignant and dramatic story grounded in provocative ideas,

What if the history of the transatlantic slave trade had been reversed and Africans has enslaved Europeans? How would that have changed the ways that people justified their inhuman behavior? How would it inform our cultural attitudes and the insidious racism that still lingers today? We see this tragicomic world turned upside down through the eyes of Doris, an Englishwoman enslaved and taken to the New World, movingly recounting experiences of tremendous hardship and the dreams of the people she has left behind, all while journeying toward an escape into freedom.

Bernardine Evaristo is one of eight siblings born in London to an English mother and a Nigerian father. An award-winning writer, she is the author of three critically acclaimed novels-in-verse, has coedited Granta’s New Writing 15, and has written for a wide variety of media, including The Guardian, The Times (London), BOMB magazine, and the BBC. The recipient of several awards, most recently a NESTA Fellowship Award, Evaristo is a fellow of Britain’s Royal Society of Literature and of the Royal Society of Arts. She lives in London.

“Breathtaking…Ingenious…a riotous, bitter course in the arbitrary nature of our cultural values. What could we possibly learn from a new satire of slavery? Plenty.”—Washington Post Book World

“Blonde Roots jolts the reader into looking at, and in turn learning from, history with new eyes.” —St. Petersburg Times

From the book’s very first paragraph, when Doris talks of Voodoomass, we know we’re entering an alternate reality, a world we’ve never seen before. Why do you think Bernardine Evaristo changed the spelling of common English words or used variations on the names of cities and places that we recognize (black to blak, white to whyte, Caucasian to Caucasoi) instead of creating an entirely new set of names, places, and races? What information does it gives us about the world of the book, even before we are familiar with Doris and her story?

The author prefaces the book with a quote from Friedrich Nietzsche: “All things are subject to interpretation: whichever interpretation prevails at a given time is a function of power and not truth.” In what ways does this apply to Evaristo’s reimagining of the transatlantic slave trade? What does it say about humankind’s ability to govern itself? Do you agree with Nietzsche?

African-American activist and former slave Frederick Douglass had mixed feelings about the intellectual awakening that came with literacy; reading broadened his mind, but he also became aware of all he lacked while enslaved. How is literacy also a double-edged sword for Doris?

Does Little Miracle get what she deserves?

Part of what makes Blonde Roots a compelling satire are the cultural stereotypes that Evaristo explores. What was your reaction to the author’s characterization of blaks and whytes? Of Great Ambossa, Europa, and Amarika?

Excerpts of songs appear frequently in Blonde Roots. Doris remembers singing “Little Bo Peep” to her babies in the womb. On her arrival at Bwana’s plantation, she hears slaves singing “God Save the Queen.” Although she doesn’t recognize the tune she remarks, “It was so stirring that the song stayed with me long after it faded into the distance” (p. 182). Why do you think the song had such an effect on Doris? Where does a song’s power come from, and what does it do for a community?

In Book Two of Blonde Roots, Bwana outlines a defense of slavery, justifying his right to recapture Doris. One of his arguments is rooted in the science of “Craniofaecia Anthropometry,” the idea that cranium size determines intelligence. He also explains that life is better for whytes once they are enslaved, implying that slavery is a form of enlightenment. Sadly, all of these justifications have real historical precedent in the annals of slavery. What was your reaction to reading Bwana’s defense? Have you felt the same kind of reaction towards an issue, article, or statement in our modern times? What are the social justice issues plaguing us now?

On Bwana’s plantation in the West Japanese Islands, the slave community has preserved a form of the Christian mass, prompting Doris to remark, “I found myself praying in a public place of worship to my own God” (p. 208). The Sunday shrine ritual begins with Voodoo-inspired incantations, then the doors get locked, Father O’Reilly dons a priest’s vestments, and communion and traditional Christian prayer follow. Do you think the congregation (whose yells reach all the way to the master’s house, it is noted) is mitigating risk by incorporating the Voodoo of their masters, or could there be authentic belief? Is there evidence either way? What role does religion play in helping Doris to freedom?

Ye Memé is a powerful female figure; “the strongest woman I had ever known,” says Doris. She’s six feet tall and muscled, she has given birth to thirteen children, enjoys top rank in the unofficial hierarchy of other slave women, and has even won a measure of respect from her master, Nonso. But she, too, reaches her breaking point when she learns her sons Yao and Dingiswayo will be taken from her. What does this say about the importance of family ties, even though the promise of her sons’ freedom is ahead?

What are the makings of a leader within the confines of the slave community? Do natural leaders like Ye Memé and Frank share anything in common with Bwana?

Garanwyn’s violent death aboard the slaver ship haunts Doris. How might that memory have influenced Doris when faced with Nonso’s plans for Ye Memé’s sons Yao and Dingiswayo?

Evaristo dedicates the book as follows: Remembering the ten to twelve million Africans taken to Europe and the Americas as slaves…and their descendants. What effect, if any, has Blonde Roots had on your understanding of slavery and the human condition? Why do you think the author wrote this alternative history?

Author Bernardine Evaristo’s mother is English and her father is Nigerian. Is the author’s race relevant to a discussion of the book? Why or why not? And if yes, how?