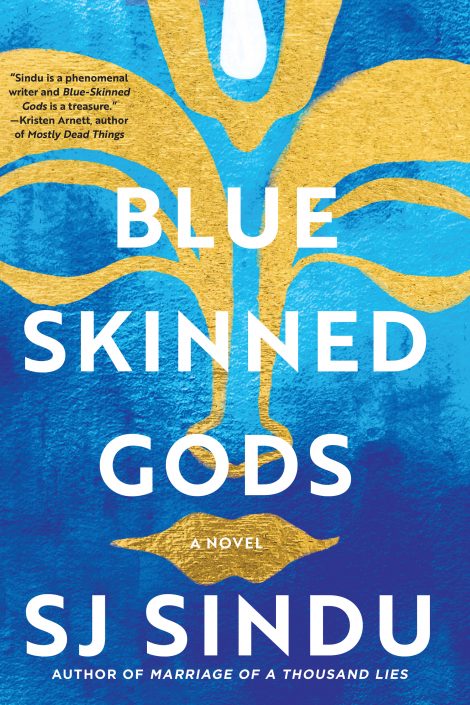 In Tamil Nadu, India, a boy is born with blue skin. His father sets up an ashram, and the family makes a living off of the pilgrims who seek the child’s blessings and miracles, believing young Kalki to be the tenth human incarnation of the Hindu god Vishnu. In Kalki’s tenth year, he is confronted with three trials that will test his power and prove his divine status and, his father tells him, spread his fame worldwide. While he seems to pass them, Kalki begins to question his divinity.

Over the next decade, his family unravels, and every relationship he relied on—father, mother, aunt, uncle, cousin—starts falling apart. Traveling from India to the underground rock scene of New York City, Blue-Skinned Gods explores ethnic, gender, and sexual identities, and spans continents and faiths, in an expansive and heartfelt look at the need for belief in our globally interconnected world. 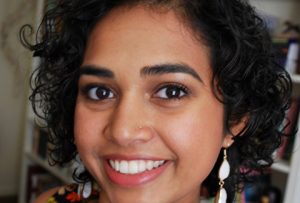 SJ Sindu was born in Sri Lanka and raised in Massachusetts. Her hybrid fiction and nonfiction chapbook, I Once Met You But You Were Dead, won the 2016 Turnbuckle Chapbook Contest and was published by Split Lip Press. She holds a PhD in Creative Writing from Florida State University. Marriage of a Thousand Lies is her first novel.

“SJ Sindu has written another brilliant novel in Blue-Skinned Gods. This time, she tells the story of a boy with blue skin who is trying to be the god everyone tells him he is . . . Here is a novel about the bonds between brothers, a deceptive tyrant and son, a mother who doesn’t know how to save herself or her child, a boy and how he yearns for his young loves, and so much more. The richness of this story will take hold of you and never let go.”—Roxane Gay

“Blue-Skinned Gods is a marvel of a novel. S.J. Sindu has created a cast of characters so compelling it was difficult to set the book down. I was enraptured by the careful twining of these lives: a manipulative father, a mother who loves her son to the point of agony, the joy and despair of tender first love, the pressure of knowing your destiny and the devastation of losing everything at once. It is a true joy to encounter a book so beautifully written. The prose is lush and stunning, the narrative wildly gripping. Sindu is a phenomenal writer and Blue-Skinned Gods is a treasure.”—Kristen Arnett, New York Times Bestselling Author of Mostly Dead Things

“With Blue-Skinned Gods, SJ Sindu has written an epic in every sense of the word: the amazing life and times of Kalki Sami, the boy born with blue skin and the power to heal, reads like an instant classic. Sindu has proven herself, yet again, to be a master storyteller—Blue-Skinned Gods is thrilling, remarkable, and totally irresistible. You won’t be able to put it down.”—Nick White, Author of How to Survive a Summer and Sweet & Low

An Author’s Note from SJ Sindu

When I finished my first novel, I searched for months for what novel to write next. In the meantime, I wrote short stories as part of a writing circle in Boston for queer writers. One night, I started a short story there about a boy who grows wings. In the story, everyone around the boy starts to believe that feathers from his wings can heal people, and he almost dies in their pursuit of a miracle as they forcibly strip his wings bare. I was trying to get at the sometimes violent nature of belief, and the complex lives of those who are believed by others to be holy.

At the same time, I read an article about a young girl in rural India who was born with multiple limbs. People in her village believed that she was the goddess incarnate, and protested her parents’ decision to have the extra limbs amputated. Again, this got me thinking about the nature of faith and religion. The final piece of inspiration for Blue-Skinned Gods was a documentary I watched called Kumaré, made by a disillusioned Indian American filmmaker who pretends to be a swami and ends up amassing a cult following. I was fascinated by how many people wanted so badly to believe in him that even after he outed himself as a fraud, people still believed him to be a god.

With these three pieces of inspiration, I began to think about how after I came out as queer, my family became more and more religious, following an Indian swami named Sai Baba—a figure immersed in scandal and zealotry. And how, in the last decade, India has swung politically right and transformed into a Hindu nationalist state. And as all these pieces swirled around in my head, I had a light-bulb moment where the premise for Blue-Skinned Gods first occurred to me.

I myself am not at all religious. I was raised Hindu by scientist parents in a country where being Hindu could get you killed. I remember praying when I was young, and having a favorite god. But by the time I was a teenager, I’d stopped believing. I’ve identified as an atheist now for a long time. For me, my awe and peace comes from nature, and sometimes, the belief that people have good in them. So this put me in a unique position from which to write the story.

I am a survivor of war, specifically the Sri Lankan civil war that lasted 26 years and finally ended in 2009. I experienced this war as a child, living in battleground cities. This experience, and the complex PTSD that resulted, made me interested as a writer in the ways we process, write, and relate to trauma using art. I’m interested in the ways in which writers craft their trauma into novels. In Blue-Skinned Gods, I turned my focus toward trauma caused by religion.

I also identify as a queer, genderqueer femme. I believe strongly in representation, and want to create queer and queer-adjacent characters that are unforgettable and idiosyncratic. I want them to have adventures. I believe that we need both stories that focus on queerness, and stories in which queer characters have narratives separate from their sexuality and gender. My first novel featured a protagonist who was struggling to come out as a lesbian. In Blue-Skinned Gods, I was more interested in creating a protagonist whose bisexuality, while a fact of his life, is not a large focus of his story but simply present. I wanted a protagonist who was allowed to access queer joy without having to focus on it.

It took me five years and eighteen drafts to write Blue-Skinned Gods. I started the process trying to understand my family’s growing religiosity, but I ended up learning far more about myself and my own faithlessness as I grew to love the protagonist in the book. In many ways, Kalki’s journey follows my own—beginning with a self-conception of invincibility and leading, ultimately, to freedom.