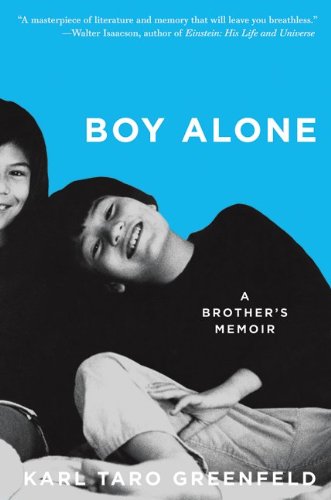 Karl Taro Greenfeld knew from an early age that his little brother, Noah, was not like other children. He couldn’t crawl, and he had trouble making eye contact or interacting with his family. As Noah grew older, his differences became even more pronounced—he was unable to communicate verbally, use the toilet, or tie his shoes, and despite his angelic demeanor, he often had violent outbursts.

No doctor, social worker, or specialist could pinpoint what was wrong with Noah beyond a general diagnosis: autism. The boys’ parents, Josh and Foumi, dedicated their lives to caring for their younger son with myriad approaches—a challenging,

Karl Taro Greenfeld knew from an early age that his little brother, Noah, was not like other children. He couldn’t crawl, and he had trouble making eye contact or interacting with his family. As Noah grew older, his differences became even more pronounced—he was unable to communicate verbally, use the toilet, or tie his shoes, and despite his angelic demeanor, he often had violent outbursts.

No doctor, social worker, or specialist could pinpoint what was wrong with Noah beyond a general diagnosis: autism. The boys’ parents, Josh and Foumi, dedicated their lives to caring for their younger son with myriad approaches—a challenging, often painful experience that the devoted father detailed in a bestselling trilogy of books.

Now, for the first time, acclaimed journalist Karl Taro Greenfeld speaks out about growing up in the shadow of his autistic brother, revealing the complex mix of rage, confusion, and love that defined his childhood. Boy Alone is his brutally honest memoir of the hopes, dreams, and realities of life with a mentally disabled sibling.

Seamlessly weaving together the social history of autism and autism research—as the Greenfelds lived through it in seeking treatment for Noah—with the deeply affecting story of two very different boys growing up side by side, this book raises crucial philosophical questions: Can relationships exist without language? How should aging parents care for a nonverbal, violent child, and then a grown man who is not self-sufficient? Is there anything that can be done to help an extremely autistic child or adult become a member of mainstream society?

Haunting, tragic, and unforgettable, this chronicle of autism is a beautiful, wholly original exploration of what it means to be a family, a brother, and a person.

Karl Taro Greenfeld is the author of China Syndrome, Standard Deviations, and Speed Tribes. He is the former editor of Time Asia and editor-at-large for Sports Illustrated. His writing has appeared in numerous Best American anthologies, including Best American Short Stories 2009. He lives in California with his wife and two daughters.

“Recent autism memoirs range from accounts of strenuous ‘healing’ to reflection on accepting the condition. Such a reaction isn’t found in Greenfeld’s book. . . . Karl resolves the conflict he sets up . . . with a surprise twist that may remind some readers of ‘The Sixth Sense.'” — Polly Morrice, New York Times Book Review

“Sibling rivalry—and love—of a ravaging kind is the subject of this unsparing memoir of the author’s life with his severely autistic brother. [An] affecting chronicle of a family simultaneously shattered and bound tight by autism.” — Publishers Weekly

“Karl Taro Greenfeld grows from child to boy to man, variously resisting and succumbing to the force of his brother’s autism. The reader has no choice but to take the same emotional, heartwarming, tragic, comic, frustrating, loving, painful, uplifting journey.” — Paul A. Offit, author of Autism’s False Prophets

Who is the boy in the title?

How are the brothers similar? How was Karl sometimes more difficult to deal with than Noah? Did you like Karl? Does your opinion of him change through the book?

What affect did Noah’s autism have on the Greenfeld family as a whole? How did it impact them individually? How did autism affect his parent’s marriage and their careers?

Talk about the Greenfeld home with Noah as its center. What adjectives would you use to describe it?

Did the Greenfelds pay enough attention to their normal son? Can the parents of a severely autistic child ever pay “too much attention” to their afflicted child? Can balance be found?

Having an autistic brother set Karl apart from his friends, especially when the Greenfelds moved to Southern California. How did having bohemian parents from diverse ethnic backgrounds—a writer Jewish father and an artist Japanese mother—compound his feelings of isolation?

Noah was considered to be a beautiful child. How might his beauty have shaped the way people saw him? Would he (or the idea of him) have received the same level of attention and compassion if he weren’t as attractive?

Karl uses excerpts from his father’s journals and books throughout the memoir. At one point, his father comments, “Sometimes I hope Noah gets sick and dies painlessly.” What do you think of this? Is it cruel and heartless, or a cry of love?

The playwright Arthur Miller, a family friend, advised the Greenfelds to institutionalize Noah early. Could you have done this? How might the Greenfeld family’s lives have changed if they’d institutionalized him earlier? Karl argues that their overwhelming love for and loyalty to their autistic son may have been their weakness. Do you agree? Yet Karl often argued to keep Noah home when the discussion came up. Why?

Discuss the different forms of treatment that Noah underwent. What does it say about our society that we have so few places for people like him? How have our attitudes towards autism changed?

Greenfeld mentions the Individuals with Disabilities Act and the Education of the Handicapped Act “which gives parents the legal clout to sue their public school systems to provide one-on-one support so their children can be ‘mainstreamed’—attend normal classes in a typical school environment for at least portion of the school day.” Should children like Noah be “mainstreamed”? What does mainstreaming offer? Does it have drawbacks? One-on-one support is expensive. Do you know what percentage of your local school budget goes toward special needs education?

The author writes of people who accused his family of ignoring the “gift of Noah”—and those who charged that perhaps Noah was reflecting back the Greenfelds’ own negative feelings. Why do people feel they have a right to judge others so harshly?

Late in the book, Greenfeld writes a scenario for Noah in which he has a job, can communicate, falls in love. Why do you think he included this? How did you feel when you read it—and what comes after? How does this sequence compare to what is happening in Karl’s own life at the time?

Karl writes, “unspoken is the motivation for why we do so much of what we do for Noah: it is to make ourselves feel better.” Do you think he is being too harsh on himself and his family? How much do we owe to another human being who is our flesh and blood? Reflecting on his parents motives, he writes, “What it came down to for them was this: our home was the best place for Noah, even though Noah was the worst thing that could happen to a home.” Is it right to put one member’s welfare above the rest of the family?

What did you take away from Boy Alone?