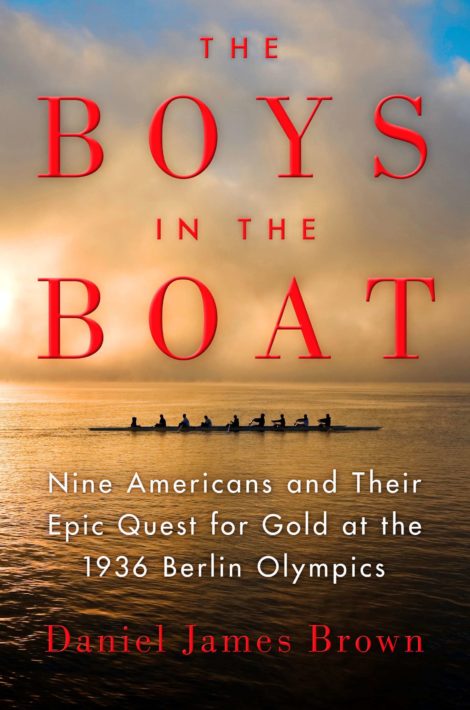 THE BOYS IN THE BOAT

For readers of Unbroken, out of the depths of the Depression comes an irresistible story about beating the odds and finding hope in the most desperate of times—the improbable, intimate account of how nine working-class boys from the American West showed the world at the 1936 Olympics in Berlin what true grit really meant.

It was an unlikely quest from the start. With a team composed of the sons of loggers, shipyard workers, and farmers, the University of Washington’s eight-oar crew team was never expected to defeat the elite teams of the East Coast and Great Britain,

For readers of Unbroken, out of the depths of the Depression comes an irresistible story about beating the odds and finding hope in the most desperate of times—the improbable, intimate account of how nine working-class boys from the American West showed the world at the 1936 Olympics in Berlin what true grit really meant.

It was an unlikely quest from the start. With a team composed of the sons of loggers, shipyard workers, and farmers, the University of Washington’s eight-oar crew team was never expected to defeat the elite teams of the East Coast and Great Britain, yet they did, going on to shock the world by defeating the German team rowing for Adolf Hitler. The emotional heart of the tale lies with Joe Rantz, a teenager without family or prospects, who rows not only to regain his shattered self-regard but also to find a real place for himself in the world. Drawing on the boys’ own journals and vivid memories of a once-in-a-lifetime shared dream, Brown has created an unforgettable portrait of an era, a celebration of a remarkable achievement, and a chronicle of one extraordinary young man’s personal quest.

Daniel James Brown is the author of two previous nonfiction books, The Indifferent Stars Above and Under a Flaming Sky, which was a finalist for a Barnes & Noble Discover Award. He has taught writing at San Jose State University and Stanford University. He lives outside Seattle.

“For those who like adventure stories straight-up, The Boys in the Boat… is this year’s closest approximation of Unbroken….It’s about the University of Washington’s crew team: “Nine working-class boys from the American West who at the 1936 Olympics showed the world what true grit really meant.”—New York Times

“If you imagined a great regatta of books about rowing, then Brown’s Boys in the Boat certainly makes the final heat….”—Boston Globe

“This riveting and inspiring saga evokes that of Seabiscuit…Readers need neither background nor interest in competitive rowing to be captivated by this remarkable and beautifully crafted history. Written with the drama of a compelling novel, it’s a quintessentially American story that burnishes the esteem in which we embrace what has come to be known as the Greatest Generation.”—Associated Press

“[Brown] offers a vivid picture of the socioeconomic landscape of 1930s America (brutal), the relentlessly demanding effort required of an Olympic-level rower, the exquisite brainpower and materials that go into making a first-rate boat, and the wiles of a coach who somehow found a way to, first beat archrival University of California, then conquer a national field of qualifiers, and finally, defeat the best rowing teams in the world. A book that informs as it inspires.”—Booklist (Starred)

1. Did you know much about rowing before reading The Boys in the Boat? If not, what aspects of the sport surprised you most? If so, did you learn anything about rowing that you didn’t know before? And if you don’t generally follow sports or sports history, what made you want to read this book?

2. Compare how the Olympics were regarded in the 1930s to how they are regarded now. What was so significant about the boys’ win in 1936, right on the dawn of the Second World War? What political significance do the Olympics Games hold today?

3. Thanks to hours of interviews and a wealth of archival information from Joe Rantz, his daughter Judy, and a number of other sources, Daniel James Brown is able to tell Joe’s story in such fine detail that it’s almost as if you are living in the moment with Joe. How did you feel as you were reading the book? What significance does Joe’s unique point of view have for the unfolding of the narrative? And why do you think Joe was willing to discuss his life in such detail with a relative stranger?

4. While The Boys in the Boat focuses on the experiences of Joe Rantz and his teammates, it also tells the much larger story of a whole generation of young men and women during one of the darkest times in American history. What aspects of life in the 1930s struck you most deeply? How do the circumstances of Americans during the Great Depression compare to what America is facing now?

5. Brown mentions throughout the book that only a very special, almost superhuman individual can take on the physical and psychological demands of rowing and become successful at the sport. How did these demands play out in the boys’ academic and personal lives? How did their personal lives influence their approach to the sport?

6. Despite how much time Joe Rantz spent training with the other boys during his first two years at the University of Washington, he didn’t really form close personal relationships with any of them until his third year on the team. Why do you think that was? What factors finally made Joe realize that it did matter who else was in the boat with him (p. 221)?

7. Joe and Joyce maintain a very loving and supportive relationship throughout Joe’s formative years, with Joyce consistently being his foundation, despite Joe’s resistance to relying on her. How did their relationship develop while they were still in college? In what ways did Joyce support Joe emotionally? What about Joyce’s own challenges at home? How do you think her relationship with her parents affected her relationship with Joe?

8. Al Ulbrickson’s leadership style was somewhat severe, to say the least, and at many times, he kept his opinions of the boys and their standings on the team well-guarded. Even with this guardedness, what about him inspired Joe and the boys to work their hardest? What strategies did Ulbrickson use to foster competition and a strong work ethic among them and why?

9. George Pocock and Al Ulbrickson each stand as somewhat mythic figures in The Boys in the Boat; however, they were very different men with very different relationships to the boys. Discuss their differences in leadership style and their roles within the University of Washington’s rowing establishment. What about Pocock enabled him to connect with Joe Rantz on such a personal level?

10. At one point, Pocock pulls Joe aside to tell him “it wasn’t just the rowing but his crewmates that he had to give himself up to, even if it meant getting his feelings hurt” (p. 235). How do you think this advice affected Joe’s interactions with the other boys? How do you think it might have affected Joe’s relationship to his family, especially after the deaths of Thula Rantz and his friend Charlie MacDonald?

11. What was Al Ulbrickson and Ky Ebright’s relationship to the local and national media? How did they use sportswriters to advance their teams’ goals and how did the sportswriters involve themselves in collegiate competition? Were you surprised at all by the level of involvement, especially that of Royal Brougham? How does it compare to collegiate sports coverage today?

12. When Al Ulbrickson retired in 1959, he mentioned that one of the highlights of his career was “the day in 1936 that he put Joe Rantz in his Olympic boat for the first time, and watched the boat take off” (p. 364). Why do you think that moment was so important for Ulbrickson? What about Joe was so special to him and how did Joe become the element that finally brought the boys of the Husky Clipper together?

13. Later in the book, it is noted “all along Joe Rantz had figured that he was the weak link in the crew” (p. 326), but that he found out much later in life that all the other boys felt the same way. Why do you think that was? And why do you suppose they didn’t reveal this to each other until they were old men?

14. What was your favorite hair-raising moment in The Boys of the Boat? Even knowing the outcome of the 1936 Olympic Games, was there any point where you weren’t sure if Joe and the boys would make it?