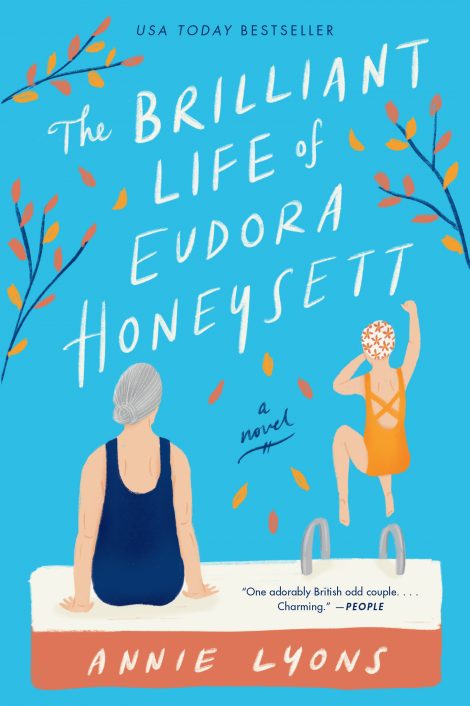 THE BRILLIANT LIFE OF EUDORA HONEYSETT

Infused with the emotional power of Me Before You and the irresistible charm of Eleanor Oliphant Is Completely Fine and Be Frank with Me, a moving and joyous novel about an elderly woman ready to embrace death and the little girl who reminds her what it means to live.

Eudora Honeysett is done with this noisy, moronic world—all of it. She has witnessed the indignities and suffering of old age and has lived a full life. At eighty-five,

Infused with the emotional power of Me Before You and the irresistible charm of Eleanor Oliphant Is Completely Fine and Be Frank with Me, a moving and joyous novel about an elderly woman ready to embrace death and the little girl who reminds her what it means to live.

Eudora Honeysett is done with this noisy, moronic world—all of it. She has witnessed the indignities and suffering of old age and has lived a full life. At eighty-five, she isn’t going to leave things to chance. Her end will be on her terms. With one call to a clinic in Switzerland, a plan is set in motion.

Then she meets ten-year-old Rose Trewidney, a whirling, pint-sized rainbow of sparkling cheer. All Eudora wants is to be left alone to set her affairs in order. Instead, she finds herself embarking on a series of adventures with the irrepressible Rose and their affable neighbor, the recently widowed Stanley—afternoon tea, shopping sprees, trips to the beach, birthday celebrations, pizza parties.

While the trio of unlikely BFFs grow closer and anxiously await the arrival of Rose’s new baby sister, Eudora is reminded of her own childhood—of losing her father during World War II and the devastating impact it had on her entire family. In reflecting on her past, Eudora realizes she must come to terms with what lies ahead.

But now that her joy for life has been rekindled, how can she possibly say goodbye? 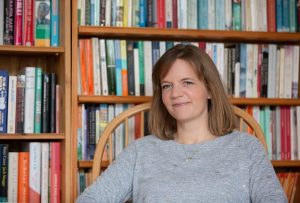 After a career in bookselling and publishing, Annie Lyons published five books in the U.K., including the best-selling, Not Quite Perfect. When not working on her novels, she teaches creative writing. She lives in south-east London with her husband and two children.

“The Brilliant Life of Eudora Honeysett is an exquisitely poignant tale of life, friendship and facing death. In the latter, the author dares to explore a subject that many shy away from, but she does so with touching sensitivity, gentle humour and absolute honesty. Eudora’s courage, dignity and wry sense of fun are beautifully drawn as she takes the reader on the heart-breaking yet ultimately uplifting journey of her life and death. Everyone should read this book.”-Ruth Hogan, author of The Keeper of Lost Things and The Moon, the Stars, and Madame Burova

“Lyons’ characters are unique and wonderful, portrayed with a depth that allows readers to understand their motivations and empathize with them. . . . And yet the trio’s unlikely camaraderie has the power to rejuvenate them all, showing that good friendship makes life worth living. A sensitive examination of human connections that can both damage and heal.”–Kirkus Reviews

“Lyons’ touching tale of intergenerational friendship is reminiscent of Frederik Backman’s A Man Called Ove . . . this is a thoroughly enchanting feel-good read.”–Booklist

“A charming, thought-provoking story about the healing powers of friendship and love.”–Shelf Awareness

When Eudora Honeysett hears the flip-clunk of the letterbox on this particular Tuesday morning, her heart skips before she pulls it back down to earth like a rapidly descending hot-air balloon. It will be junk mail as usual. Unsolicited junk. As she struggles to a standing position, retrieves her stick, and anchors herself to gravity, Eudora marvels, not for the first time, at humanity’s ability to fill the world with unwanted junk. The oceans are stuffed with plastic, the landfills with broken three-year-old fridges, and her doormat with an endless littering of pizza leaflets, advertisements for retirement homes, and flyers from individuals offering to repave a driveway she doesn’t have. Occasionally, she casts a critical eye over the expensively produced retirement-home brochures filled with photographs of smiling elderly couples toasting their successful move to the old person’s equivalent of a Premier Inn. Eudora can’t imagine anything worse. She was born in this house and intends to die in this house, hopefully sooner rather than later.

Death is an inevitable preoccupation for a woman of Eudora’s years, but she can’t recall a time when it wasn’t lurking in the background. It’s partly due to growing up during a world war, she supposes. She doesn’t fear it though. She is wryly amused by the world’s innate ability to deny death but wholly unsurprised too. People are too busy staring at their telephones, endlessly searching for some truth that will never come, idly sniggering at infantile video clips of goodness knows what, never stopping to notice the universe around them or the people in it. They certainly never notice her. Eudora Honeysett is invisible, and she doesn’t care one jot. She has lived her life as best she can. She is ready for the next step, the final destination, or whatever half-baked euphemism people insist on using these days.

Death. The end. She’s rather looking forward to it. It may be a black hole or, if she’s lucky, she’ll be reunited with all the people she’s ever loved. This is a short list but then why do people insist on having hundreds of friends? She heard a discussion on the radio the other day about “toxic friendships” and how you need to rid yourself of these kinds of people. Eudora’s advice would be to avoid them in the first place. Keep yourself to yourself. Mind your own beeswax, as her mother was fond of saying.

She retrieves the post from the mat with a certain amount of difficulty and is pleasantly surprised to find an A4-sized envelope with a Swiss postmark addressed to her among the rubbish. Eudora experiences that skip of anticipation again, this time well-founded. She’s been expecting this, looking forward to it even. She carries the envelope with the other items balanced on top to the kitchen, holding it out like a holy artifact, worthy of respect and awe. She sifts through the other post. There’s another letter addressed to her—one more wholly unnecessary hospital appointment. Eudora understands that it’s the NHS’s duty to preserve life, but sometimes she wishes they’d leave her alone. Sometimes she wishes there was an opt-out clause, a way of making it all stop. Eudora throws the letter to one side and grasps the A4 envelope in her faltering grip. Glancing at the clock, she reluctantly places the precious item to the side. She will save it for later so that she can give it her full attention.

Eudora gathers her belongings in preparation for leaving the house. She welcomes this daily routine. She may be world-weary, but she refuses to stay indoors all day, slumped in a chair like many of her peers. Her body is winding down like an old clock, but she is damned if she’s going to accelerate the process. Eudora gets up every morning at eight and leaves the house by ten. There are far too many slovens in the world. Eudora does not intend to join their ranks.

She picks up the bag containing her swimming things and leaves the house. The bright sunlight is rather dazzling, and it takes a few moments for her glasses to adjust, bringing shade and comfort. Eudora notices that the estate agent’s “for sale” sign in front of the house next door has been changed to “sold.” She shivers with dread at the prospect of new neighbors. Hopefully they will keep themselves to themselves like the last lot. She notices the postman to-ing and fro-ing from house to house and avoids his gaze. They’ve been on bad terms since she scolded him for taking a shortcut in front of her house, tramping a path through her daylilies so that they failed to bloom last year. He used to stop and chat occasionally but now he looks the other way. She doesn’t care. He was being inconsiderate and needed to be told.

Eudora makes slow progress but remains doggedly determined. She soon falls into a steady tap, step, step, tap, step, step rhythm using her walking stick, or “third leg” as the smiling social worker called it. Her name was Ruth and she was enthusiastically positive. Eudora didn’t share her cheer but didn’t mind it either. Ruth was kind, and in Eudora’s world, this commodity was in short supply. It was wise to embrace it whenever possible.