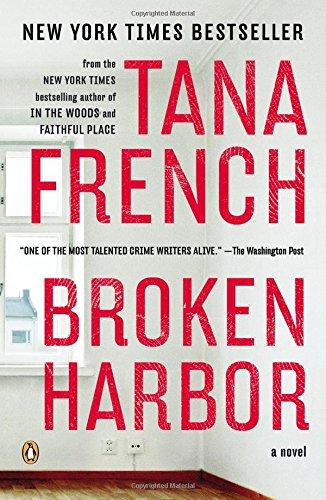 Tana French’s rise can only be called meteoric. Starting with her award-winning debut, French has scored four consecutive New York Times bestsellers and established herself as one of the top names in the genre. Broken Harbor is quintessential French—a damaged hero, an unspeakable crime, and an intricately plotted mystery—nestled in a timely examination of lives shattered by the global economic downturn.

Tana French’s rise can only be called meteoric. Starting with her award-winning debut, French has scored four consecutive New York Times bestsellers and established herself as one of the top names in the genre. Broken Harbor is quintessential French—a damaged hero, an unspeakable crime, and an intricately plotted mystery—nestled in a timely examination of lives shattered by the global economic downturn.

Mick “Scorcher” Kennedy always brings in the killer. Always. That’s why he’s landed this high-profile triple homicide. At first, he thinks it’s going to be simple, but the murder scene holds terrifying memories for Scorcher. Memories of something that happened there back when he was a boy.

Tana French grew up in Ireland, Italy, the US and Malawi, and has lived in Dublin since 1990. She trained as a professional actress at Trinity College, Dublin, and has worked in theatre, film and voiceover.

"One of the most talented crime writers alive."—The Washington Post

“Ms. French created haunting, damaged characters who have been hit hard by some cataclysm . . . This may sound like a routine police procedural. But like Gillian Flynn’s Gone Girl, this summer’s other dagger-sharp display of mind games, Broken Harbor is something more.”—Janet Maslin, The New York Times

“So much of the pleasure inherent in reading these novels is in trying to figure out where things are going and being constantly surprised, not to mention thoroughly spooked. I predict Broken Harbor will be on more than one Best of 2012 lists — it’s definitely at the top of mine.”—The Associated Press

"Broken Harbor is truly a book for, and of, our broken times. It’s literature masquerading as a police procedural."—The Cleveland Plain Dealer

French writes with considerable affection for Ireland. However, her books often contain more than a hint of lament for the country’s recent decline. What aspects of Ireland in the present day seem to sadden her most?

Scorcher believes that post–modern society has begun to turn “feral” and that “everything that stops us being animals is eroding, washing away like sand” (p. 85). Do you agree with Scorcher’s assessment? Explain why or why not. How does Scorcher’s view of society dovetail with his self–image?

How do Scorcher’s class prejudices affect his perceptions of the Spain case? Is class bias the only reason he is so desperate to believe in the integrity of Patrick Spain?

The relationship between Scorcher and Richie evolves rapidly, beginning as one between an all–wise mentor and his trainee but transforming into a much more contentious one. Discuss this evolution and the ways French uses it to develop the two men’s characters.

Why do you think Scorcher doesn’t want to have children? Try to come up with as many plausible explanations as you can.

Tana French is a master of creating characters with virtues that are turned into vices by unlucky circumstances. What are some examples of this kind of characterization in Broken Harbor, and how do they act as a commentary on human nature?

Explaining her madness, Dina says, “There is no why.” Why is this statement especially disturbing to her brother, Scorcher?

How has Scorcher’s childhood shaped the person he is now?

How have the more youthful experiences of Conor, Pat, and Jenny shaped their characters and destinies?

Tana French manages the emotions of her interrogation scenes with great expertise, creating tremendous tensions and moving toward great crescendos of feeling. Read over one of these scenes and discuss how the emotional force builds, breaks, and subsides.