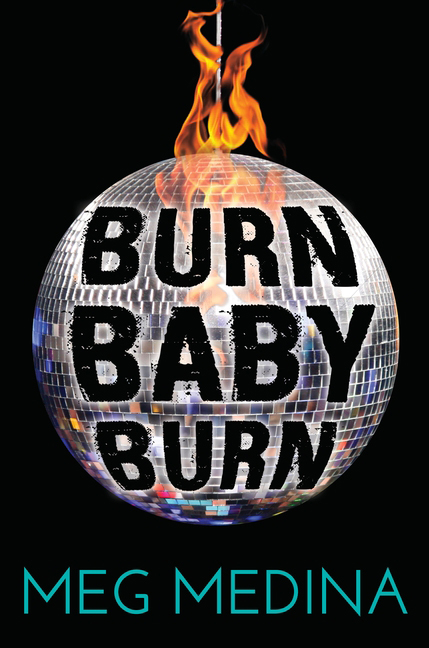 While violence runs rampant throughout New York, a teenage girl faces danger within her own home in Meg Medina’s riveting coming-of-age novel.

Nora Lopez is seventeen during the infamous New York summer of 1977, when the city is besieged by arson, a massive blackout, and a serial killer named Son of Sam who shoots young women on the streets. Nora’s family life isn’t going so well either: her bullying brother, Hector, is growing more threatening by the day, her mother is helpless and falling behind on the rent, and her father calls only on holidays.

While violence runs rampant throughout New York, a teenage girl faces danger within her own home in Meg Medina’s riveting coming-of-age novel.

Nora Lopez is seventeen during the infamous New York summer of 1977, when the city is besieged by arson, a massive blackout, and a serial killer named Son of Sam who shoots young women on the streets. Nora’s family life isn’t going so well either: her bullying brother, Hector, is growing more threatening by the day, her mother is helpless and falling behind on the rent, and her father calls only on holidays. All Nora wants is to turn eighteen and be on her own. And while there is a cute new guy who started working with her at the deli, is dating even worth the risk when the killer likes picking off couples who stay out too late? Award-winning author Meg Medina transports us to a time when New York seemed balanced on a knife-edge, with tempers and temperatures running high, to share the story of a young woman who discovers that the greatest dangers are often closer than we like to admit — and the hardest to accept.

Meg Medina is the author of YA novels Yaqui Delgado Wants to Kick Your Ass, which received the Pura Belpré Author Award, and The Girl Who Could Silence the Wind, as well as the picture books Mango, Abuela, and Me and Tía Isa Wants a Car, winner of an Ezra Jack Keats New Writer Award. She lives in Richmond, Virginia.

“Rooted firmly in historical events, Medina’s latest offers up a uniquely authentic slice-of-life experience set against a hazy, hot, and dangerous NYC backdrop. Rocky and Donna Summer and the thumping beats of disco, as well as other references from the time, capture the era, while break-ins, fires, shootings, and the infamous blackout bring a harrowing sense of danger and intensity…An important story of one of New York City’s most dangerous times.” —Kirkus Reviews (starred review)

“Medina uses Nora’s story to seamlessly connect readers to an unforgettable period in history, the setting leaving readers thirsting for more information about the summer of 1977. The character development is tight and accurately constructed. Medina holds nothing back, shedding light on the characters’ flaws, which teens today will be able to relate to. Medina is on point with the teen voices, evoking their intense fear, panic, and dreams. A devastatingly intense story, this work is a must-have for all collections, especially where Ruta Sepetys’s books are popular.” —School Library Journal (starred review)

“This vividly evoked coming-of-age story is set against actual events in 1977 New York City…Nora is an empathetic character, and Medina depicts her troubled family and their diverse Queens neighborhood with realistic, everyday detail. Numerous references to New York’s budget crisis, arson wave, and “Son of Sam” newspaper stories deliberately ground the story in a real time and place, while an ample sprinkling of seventies disco and funk song references creates a brighter soundtrack for the dreams and romance of teenage girls, hinting at a hopeful future for Nora.” —The Horn Book (starred review)

1. “I tell a thousand little lies about my life every day so I can feel like a normal person,” says Nora (page 205). What do you think is the biggest lie that Nora tells? Why does she tell it? Kathleen MacInerney has been Nora’s best friend since kindergarten, yet Nora decides “there’s just no way she would understand how Mima, Hector, and I work” (page 155). Why does Nora believe this? Do you? Why or why not?

2. Feminism was on the rise in 1977. What opportunities did the movement offer young woman like Nora and Kathleen? What did it mean to older women like Stiller and Mrs. MacInerney? Why were some women, like Mima, appalled by it?

3. “You think we suck as feminists?” Kathleen asks Nora at a women’s rights rally (page 78). “We do argue about Wella Balsam versus Prell.” What do you think is the difference between a good feminist and a bad one? Does worrying about hair care (or getting dressed up for boys) undermine Kathleen’s and Nora’s commitments to the cause?

4. Nora has a troubled relationship with both of her parents, but they aren’t the only grown-ups in her life. Who are the other important adults? How do they support her? Why? Why is Nora attracted to carpentry? What makes her so good at it?

5. In what ways is 1977 very different from our own time? In what ways is it similar? Almost forty years have passed since 1977. Try to imagine where the main characters of Burn Baby Burn are now. What do you think has become of Nora, Kathleen, and Pablo? Where is Hector?

6. Papi dotes on his youngest son, but is largely absent from the lives of his two oldest children. Whom do you blame for his behavior? Why? How does Nora finally transform her relationship with her father?

7. “Men are reckless,” Mimi tells her daughter (page 31). “They’re born that way, impulsive, but eventually they find a good woman and outgrow it.” Are boys more reckless than girls?

8. Why does Mimi demand more from her daughter than from her son? Would Hector be better off if she didn’t? Would Nora? How did a paunchy mail clerk terrorize an enormous metropolis like New York City? What were Son of Sam’s most chilling tactics?

9. Burn Baby Burn is both a love story and a horror story. What is your scene? Which scene is the scariest? Why? Pablo is handsome, kind, and smart. Why does Nora keep pushing him away?

10. “Sometimes it’s easier to let people think I’m Greek or Italian,” Nora says (page 115). Why does she sometimes feel the need to hide her ethnicity? What does being a Latina mean to Nora? What does it mean to her mother?

11. “Remember to reach,” Nora’s guidance counselor tells her on the last day of school (page 215). “You’ll surprise yourself.” What does Nora ultimately reach for? How is she surprised?

12. “Burn Baby Burn” is what Nora and Kathleen write on the beach at Breezy Point at the end of this novel. What is the significance of that phrase to the two friends? What makes it such a fitting title for this book?

13. “I wrote this story,” Meg Medina writes in her Author’s Note (page 306), “because young people everywhere sometimes find that they have to fuel their hope against a bleak backdrop and outpourings of rage.” How does Nora fuel her hope? How have other young people in difficult situations, either in your community or elsewhere, fueled theirs?