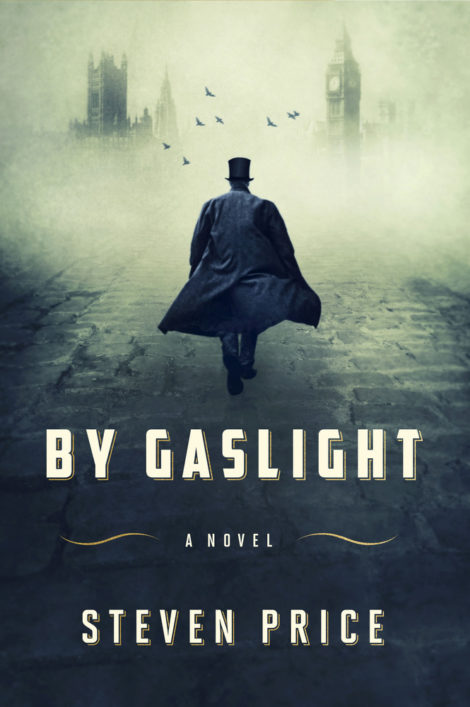 A literary tour de force of a detective’s ceaseless hunt for an elusive criminal, By Gaslight is a deeply atmospheric, haunting novel about the unending quest that has shaped a man’s life.

William Pinkerton is already famous, the son of the most notorious detective of all time, when he descends into the underworld of Victorian London in pursuit of a new lead on the fabled con Edward Shade. William’s father died without ever finding Shade, but William is determined to drag the thief out of the shadows.

Adam Foole is a gentleman without a past,

A literary tour de force of a detective’s ceaseless hunt for an elusive criminal, By Gaslight is a deeply atmospheric, haunting novel about the unending quest that has shaped a man’s life.

William Pinkerton is already famous, the son of the most notorious detective of all time, when he descends into the underworld of Victorian London in pursuit of a new lead on the fabled con Edward Shade. William’s father died without ever finding Shade, but William is determined to drag the thief out of the shadows.

Adam Foole is a gentleman without a past, haunted by a love affair ten years gone. When he receives a letter from his lost beloved, he returns to London to find her. What he learns of her fate, and its connection to the man known as Shade, will force him to confront a grief he thought long-buried.

A fog-enshrouded hunt through sewers, opium dens, drawing rooms, and séance halls ensues, creating the most unlikely of bonds: between Pinkerton, the great detective, and Foole, the one man who may hold the key to finding Edward Shade.

Steven Price’s dazzling, riveting By Gaslight moves from the diamond mines of South Africa to the battlefields of the Civil War, on a journey into a cityscape of grief, trust, and its breaking, where what we share can bind us even against our darker selves.

Steven Price‘s first collection of poems, Anatomy of Keys (2006), won Canada’s 2007 Gerald Lampert Award for Best First Collection, was short-listed for the BC Poetry Prize, and was named a Globe and Mail Book of the Year. His first novel, Into That Darkness (2011), was short-listed for the 2012 BC Fiction Prize. His second collection of poems, Omens in the Year of the Ox (2012), won the 2013 ReLit Award. He lives in Victoria, British Columbia, with his family.

“By Gaslight is Steven Price’s extraordinary historical novel, finely written and deeply researched, about the period just following the Civil War, the son of America’s most famous detective (Allen Pinkerton), and a cast of truly powerful characters, half-mad and all dangerous.” —Alan Furst, author of Night Soldiers

“This sweeping tale of the unforgettable William Pinkerton and Adam Foole thrusts the reader into smoky Victorian London with all its grit and glitter. Uniting the literary grace and depth of William Faulkner and Cormac McCarthy with the intrigue and momentum of a Sherlock Holmes story, By Gaslight is completely absorbing—an epic, brilliantly written novel to rank with the world’s best.” — Jacqueline Baker, author of The Broken Hours

“This darkly mesmerizing tale is worthy of the great Victorian thriller writers, but Steven Price brings to his prose a sensibility and dazzling skill all his own. The gruesome, eerie events that unfold during the search for Charlotte Reckitt are given enthralling life in a book that is perfectly grounded in period and rich in incident and image. Haunting and deeply satisfying.”— Marina Endicott, author of Close to Hugh

“A dark tale of love, betrayal and murder that reaches from the slums of Victorian London to the diamond mines in South Africa, to the American Civil War and back. Superb storytelling.” — Kurt Palka, author of the Piano Maker

1. By Gaslight mixes history with fiction as the detective William Pinkerton hunts for Edward Shade, a con man who taunted and eluded William’s father, Allan Pinkerton, the famous private detective and spy. What kind of man was Allan Pinkerton? What did his son and Edward Shade each learn from him about courage, fear, fatherhood, and love?

2. Victorian London is as vivid and complex a character as any other in By Gaslight. How do the sights, smells, and sounds of London mirror the feelings and influence the behavior of the men and women in the story?

3. Price repeatedly describes the type and quality of light in great detail. How does he use light to “illuminate” a scene—give insight into character, explain the past, or foreshadow the future? Symbolically, what are the differences between gaslight, candlelight, and electric light?

4. What experiences do Charlotte Reckitt and Adam Foole’s child accomplice, Molly, have in common? How was the woman Charlotte became determined by her childhood? What kind of child is Molly? Is there anyone she loves or trusts? What frightens her?

5. The story of the capture of John Reno in 1868 is based on fact. What is its significance within the larger framework of the story of Edward Shade? What does it reveal about William Pinkerton’s complicated relationship with his father?

6. Did Allan Pinkerton send Ignatius Spaar to Richmond to rescue Edward Shade, or to kill him? What was William’s role?

7. How do Adam and William show love to the people they care about? William to his wife and daughters? Adam to his “family” of Japheth Fludd and Molly? To Charlotte Reckitt?

8. Who or what is the devil referred to in the section, “Inventing the Devil”? How does Martin Reckitt define evil? Why does Price choose Reckitt to speak not only of loss of faith, Satan, and evil, but of the power of love? What evil is committed in the course of the story? By whom? Is there forgiveness? Salvation?

9. One of the first things we learn about William Pinkerton is that he is “not the law.” Does he believe that he is above or outside the law? How do his methods and morals compare to those of the Scotland Yard detectives Chief Inspector John Shore and Inspector Blackwell?

10. In the opening pages of chapter 9, Adam Foole reflects on everything he has heard about William Pinkerton. Does the reality fit this description? Why does Foole believe Pinkerton is “a great man gone wrong” (p. 325)? Could the same be said about Foole? Who, if anyone, is a hero in the story? Who is a villain?

11. Sally Porter gives William Pinkerton information about Edward Shade three times, twice face-toface and once in a letter. What does William learn from her each time? How is he deceived? What is the truth about Allan Pinkerton and Shade?

12. Real-life Pinkerton operatives were among the first private detectives to work undercover. In the fictional world of By Gaslight, truth and identity frequently seem to be undercover, elusive as shadows. What are some examples of characters hiding, running away, changing their identities, or manipulating truth? What is their motivation?

13. What is the meaning of Martin Reckitt’s statement “Everything in the human world is translated by time. Even evil” (p. 292)? What elements of Pinkerton’s and Foole’s life stories have been translated by time? How does William translate the story of Malvern Hill for the columnist who is interviewing him during World War I? How will she reinterpret what he tells her for her readers?

14. “Violence is not my talent,” Adam Foole says (p. 192). What are his talents? Do he and William come to appreciate each other’s talents? Do they share some of the same talents? What kind of Pinkerton operative might Adam Foole have been?

15. Much like Charles Dickens, Steven Price has given some of his characters names that hint at their nature. What significance do you see in the names Foole, Shade, Fludd, Sharper, and Reckitt? Are there other names of people or places that add a deeper level of meaning to the story?