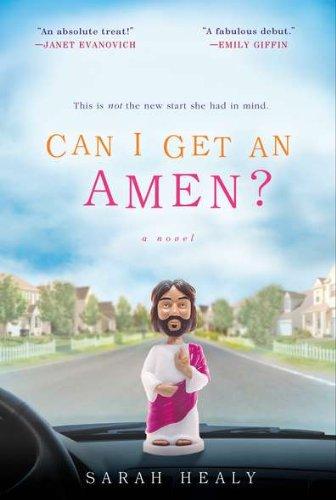 CAN I GET AN AMEN?

When the last thing you want is the one thing you need, you’ve got to have a little faith…

Growing up, Ellen Carlisle was a Christian: she went to Jesus camp, downed stale Nilla wafers at Sunday school, and never, ever played with Ouija boards. Now, years later, when infertility prevents her from giving her ambitious attorney husband a family, she finds herself on the brink of divorce, unemployed, and living with her right-wing, Born-Again-Christian parents in her suburban New Jersey hometown. There the schools are private, the past is public, and blessings come in lump sums.

When the last thing you want is the one thing you need, you’ve got to have a little faith…

Growing up, Ellen Carlisle was a Christian: she went to Jesus camp, downed stale Nilla wafers at Sunday school, and never, ever played with Ouija boards. Now, years later, when infertility prevents her from giving her ambitious attorney husband a family, she finds herself on the brink of divorce, unemployed, and living with her right-wing, Born-Again-Christian parents in her suburban New Jersey hometown. There the schools are private, the past is public, and blessings come in lump sums.

Then Ellen meets a man to whom she believes she can open her heart, and she begins to think that maybe it’s true what they say, that everything happens for a reason… Until all that was going well starts going very badly, and Ellen is finally forced to dig down deep to find her own brand of faith.

Sarah Healy lives with her husband and children in Vermont where she is at work on her second novel.

"Funny, smart, wise, and refreshing, Can I Get An Amen? is the work of a great new talent and an obviously gifted writer."—Valerie Frankel, author of Thin is the New Happy and Four of a Kind

“An emotional and satisfying novel that’s as tender as it is funny.”—Emily Giffin, New York Times bestselling author of Something Borrowed

Have you ever played with a Ouija board? Attended church school of some kind? Are you willing to fess up and share your experiences?

What was your general reaction to the novel? What did you like and not like about it?

Which characters did you especially enjoy? Did they all ring true for you?

Did you have any sympathy for Ellen’s husband, Gary, who divorces her because she can’t have a child? What would you do in a similar situation? Do you think men and women tend to approach infertility in very different ways?

What do you think of the way Sarah Healy explores faith? Did the novel make you think about how faith can both bring families together and tear them apart? Did you find the depiction of religion respectful?

Would you say that you currently practice more or less religion than you were brought up with? What role has religion played in your own family?

Ellen realizes that no one has ever asked her what religious beliefs she holds. People in church assume they know and everyone else steers clear of the subject. Has that been your experience? Why don’t we talk about our religious beliefs? Do we lose something by failing to?

Though Ellen seems ambivalent about Christianity, she always seems to turn to prayer during her most desperate times. Is it out of habit? Or do you think it signifies a deeper belief than she wants to admit?

It’s ironic that Ellen’s mother, Patty, makes Ellen’s divorce and infertility public through a prayer request, yet Ellen’s parents won’t tell even their own children about their imminent bankruptcy. What do you think is going on in Patty’s and Roger’s minds to make such inconsistency possible? Have you ever found yourself in a similar situation, with someone accusing you of one thing while being guilty of it themselves?

In the novel, Sarah Healy gently bursts what some might consider religious fantasies—for example, the idea that “being Christian” and attending church will somehow protect us from bad things happening, and that the material goods we buy are “blessings” from God. Without getting into specific religious beliefs, can you think of other current religious fictions?

Abortion is another highly sensitive subject that is rarely explored in contemporary women’s fiction. Do you think Patti was right in insisting that Kat give birth and then give her child up for adoption? Compare the “choice” Kat had in the mid-1990s to the choice that Patti had in the 1960s. Do you think our society has made any progress in finding common ground regarding this controversial issue?

Parker Kent is the villain of the novel, but Ellen has some sympathy for her at the end. Discuss the price that Parker pays to keep her marriage intact. What do you think Parker knew and didn’t know about her father’s behavior toward Jill during that visit to Nantucket? Do you think Parker’s complicity back then influenced the kind of marriage she ended up having?

Have you ever dated a minister, or been a minister looking for dates? What particular challenges do ministers face in their love lives? Discuss some of the reasons why the love interest in women’s fiction is so rarely a minister. And, by the way, what did you think of Mark?

Unconditional love, both human and divine, is a theme in this book. Do you think it’s possible to love unconditionally?

Did you find the end of the novel satisfying? If the book continued, what do you think would happen to the characters? What would you like to see happen to them?

In the last line of the novel, Ellen states that she still doesn’t know what she is, or how to define her beliefs. Can you sympathize with her uncertainty?