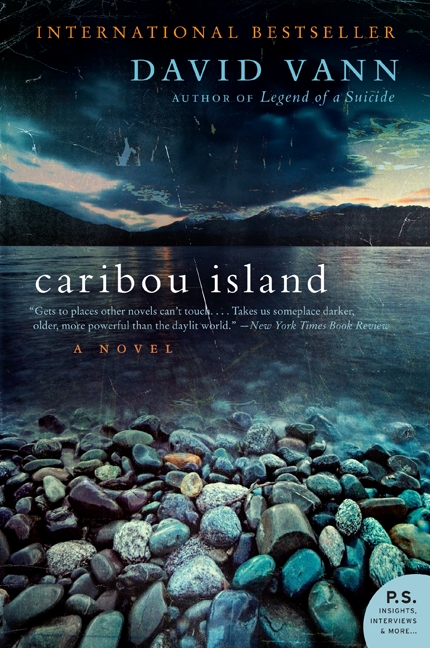 On a small island in a glacier-fed lake on Alaska’s Kenai Peninsula, a marriage is unraveling. Gary, driven by thirty years of diverted plans, and Irene, haunted by a tragedy in her past, are trying to rebuild their life together. Following the outline of Gary’s old dream, they’re hauling logs to Caribou Island in good weather and in terrible storms, in sickness and in health, to build the kind of cabin that drew them to Alaska in the first place.

But this island is not right for Irene. They are building without plans or advice, and when winter comes early,

On a small island in a glacier-fed lake on Alaska’s Kenai Peninsula, a marriage is unraveling. Gary, driven by thirty years of diverted plans, and Irene, haunted by a tragedy in her past, are trying to rebuild their life together. Following the outline of Gary’s old dream, they’re hauling logs to Caribou Island in good weather and in terrible storms, in sickness and in health, to build the kind of cabin that drew them to Alaska in the first place.

But this island is not right for Irene. They are building without plans or advice, and when winter comes early, the overwhelming isolation of the prehistoric wilderness threatens their bond to the core. Caught in the emotional maelstrom is their adult daughter, Rhoda, who is wrestling with the hopes and disappointments of her own life. Devoted to her parents, she watches helplessly as they drift further apart.

Brilliantly drawn and fiercely honest, Caribou Island captures the drama and pathos of a husband and wife whose bitter love, failed dreams, and tragic past push them to the edge of destruction. A portrait of desolation, violence, and the darkness of the soul, it is an explosive and unforgettable novel from a writer of limitless possibility.

David Vann is the author of Legend of a Suicide, which has been translated into sixteen languages, won ten prizes, and been on forty Best Books of the Year lists worldwide. He’s also the author of the bestselling memoir A Mile Down: The True Story of a Disastrous Career at Sea and Last Day on Earth: A Portrait of the NIU School Shooter, winner of the AWP Nonfiction Award. A current Guggenheim Fellow and former Stegner Fellow and NEA Fellow, he has taught at Stanford and Cornell, and is now a professor at the University of San Francisco.

“Dazzling…. Vann knows the darkness but he writes from the compassionate light of art.  This is an essential book.”—Robert Olen Butler, Pulitzer Prize-winning author of A Good Scent from a Strange Mountain

“Caribou Island gets to places other novels can’t touch. . . . Though it wears the clothes of realism—the beautiful exactness of the language, the unerring eye for detail—it takes us someplace darker, older, more powerful than the daylit world.”—Kevin Canty, New York Times Book Review

Caribou Island opens with Irene’s recollection of her mother’s suicide. How does this set the tone for what follows? How did this tragedy ultimately define Irene’s life and her relationship with her husband, Gary? Could events have unfolded for her differently?

Also at the novel’s beginning, Irene tells her daughter, Rhoda, “your father wants to leave me, and the first step is to make us move out to that island. To make it seem he gave it a try.” Is Irene correct? What was the significance of the cabin and Caribou Island for Gary?

Examine the characters and their personalities. Focusing on one or two, use examples from the book to create a profile. Did you like any of the characters? What were the motivations for their actions: What drove Gary to build the cabin on Caribou Island? Why did Irene go along with him? Why is Rhoda dating Jim? Why is Carl in Alaska? Why does Jim risk everything to be with Monique? What did each of them want—would they be happy or content if they got it?

Alaska has long been considered our last wilderness. What are your impressions of Alaska? What role does the setting play in the novel? How is our idea of masculinity tied into notions of Alaska and the frontier? What does “being a man” mean to Gary, Jim, and Carl? How would Irene, Rhoda, and Monique define what a man is?

How would you categorize Irene and Gary’s marriage? What kept them together? Why didn’t one or the other leave? Irene also tells her daughter, “We all have rules, Rhoda. And your father’s main rule is that he can never seem like the bad guy.” Do you agree? What “rules” did Irene live by? What about Rhoda and Jim? What about yourself or others you know—do you have rules?

Compare and contrast Irene and Rhoda and analyze their bond. When Rhoda breaks the news about her engagement to Jim, how does Irene react? Should she have kept her opinion to herself or does she do the right thing? Does her advice stem from bitterness or love?

“Gary knew he should feel lucky, but felt nothing except a mild, background terror of how he’d get through the day, how he’d fill the hours. He’d felt this all his adult life, especially in the evenings, especially when he was single. After the sun went down, the stretch of time until when he could sleep seemed an impossible expanse, something looming, a void that couldn’t be crossed.” Why might a man who feels—and fears—such emptiness, be drawn to a place like Alaska? What did Gary think he would find there? What did he ultimately find? Use examples from the story.

Shortly after they begin building the cabin, Irene is plagued by debilitating headaches. Were the headaches real, or a manifestation of emotional distress? How does the family react to her distress?

One of the themes of Caribou Island is change. Neither Gary nor Irene recognize the person they are today compared to who they once were—as Irene says, “each new version refuting all previous.” Do the events that impact us over the course of our lives change us that much? Is it possible to retain the core essence of self despite life’s vicissitudes? Do these characters have that core or is its absence the root of their problems?

Late in the book, Irene muses about the years past. “It hadn’t been a bad life, on the surface. Something elemental about it. Something that could have been true if it hadn’t been all just a distraction for Gary, a kind of lie. If he had been true, their lives could have been true.” Why does she think this? What isn’t “true” about Gary and why weren’t their lives “true” in Irene’s eyes?

As for her husband, Gary calls Irene “a mean old bitch” and accuses her of destroying his dreams. Are they both right? Are they both wrong? How much are each of them responsible for the state of their marriage and their lives?

Could Irene’s denouement have been prevented? How did you feel at the end? What do you think happens to Rhoda?

What did you take away from reading Caribou Island?