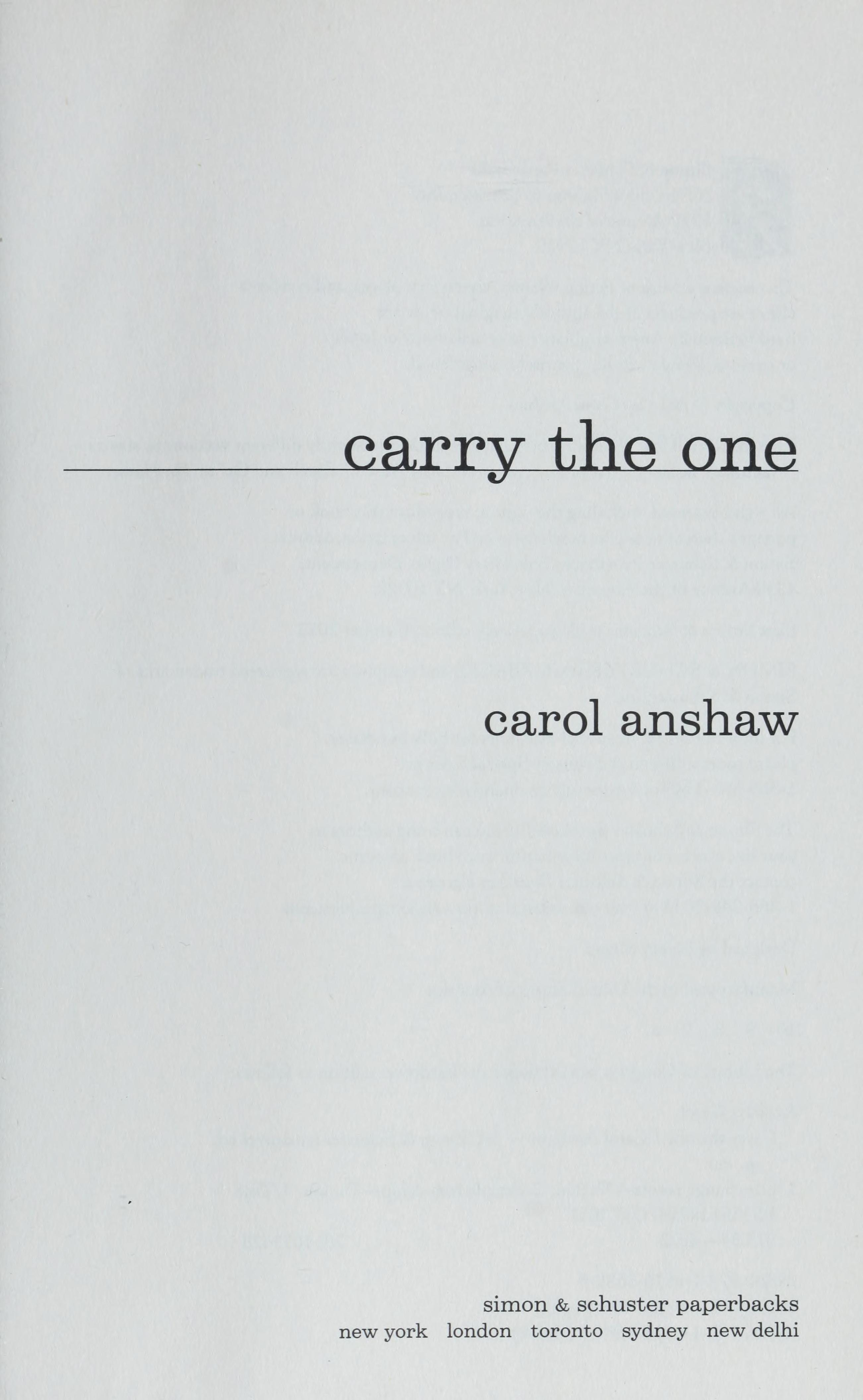 Following a devastating moment in the hours after Carmen’s wedding, three siblings and their friends move through the next twenty-five years under its long shadow. Through friendships and love affairs; marriage and divorce; parenthood, holidays, and the modest calamities and triumphs of ordinary days, Carry the One shows how one life affects another, and how those who thrive and those who self-destruct are closer to each other than we’d expect. Whether they take refuge in art, drugs, social justice, or love, Carol Anshaw’s characters are sympathetic, funny, and uncannily familiar as they reflect back to us our deepest pain and longings,

Following a devastating moment in the hours after Carmen’s wedding, three siblings and their friends move through the next twenty-five years under its long shadow. Through friendships and love affairs; marriage and divorce; parenthood, holidays, and the modest calamities and triumphs of ordinary days, Carry the One shows how one life affects another, and how those who thrive and those who self-destruct are closer to each other than we’d expect. Whether they take refuge in art, drugs, social justice, or love, Carol Anshaw’s characters are sympathetic, funny, and uncannily familiar as they reflect back to us our deepest pain and longings, our joys, and our transcendent moments of understanding.

Carol Anshaw is the author of Carry the One, Aquamarine, Seven Moves, and Lucky in the Corner. She has received the Ferro-Grumley Award, the Carl Sandburg Literary Arts Award for Fiction, and a National Book Critics Circle Citation for Excellence in Reviewing. She lives in Chicago.

“Beautifully observed . . . [Anshaw] intimately dissects how one event or choice can alter the trajectory of a life, how a fork in the road can lead to wholly unexpected and divergent outcomes . . . a resonate ‘Big Chill’-like look at how time affects relationships. . . . Though the novel grapples with the many sadnesses of life . . . it does so with lyricism and humor. . . . We are pulled along by [Anshaw’s] uncommon ability to describe just about anything. . . . As the years unfurl in this affecting novel, memories of the accident that took Casey Redman’s life receed, but the fallout from that night has been internalized by everyone involved, invisibly shaping their outlook on the world, their feelings about love and responsibility and regret.”—Michiko Kakutani, The New York Times

“Graceful and compassionate . . . Writing with rueful wit and a subtle understanding of the currents and passions that rule us, Anshaw demonstrates that struggling to do one’s best, whatever the circumstances, makes for a life of consequence.”—People magazine, 4 stars

“Carol Anshaw is one of those authors who should be a household name (in literature-loving homes, anyway). There’s a good chance that her latest novel, Carry the One, will make that happen . . . fine, eloquent.”—USA Today

At her wedding reception, Carmen, in a moment of doubt about marriage, thinks: “Still, there was nothing to be done about it now. Forward was the only available direction.” How much of life is lived on this principle—taking the step that seems to come next? How often does this turn out to be following one bad decision with another based on the first? How does this apply to the characters in this book?

How do Carmen, Alice, and Nick change over the course of the novel? Which of them changes the most, which the least?

Even before the accident, the lives of everyone involved were entwined (by marriage, sex, family, friendship). Discuss how the nature of these relationships is affected by the accident. Does the accident strengthen any bonds? Does it weaken others? How does each character’s perceptions of the others change throughout the course of the novel?

As the driver of the car, Olivia is the only one who serves prison time for Casey’s death, and as Nick enviously reflects, “prison was forcing her to atone.” Do you think the others try to atone in their own ways? Do you think Nick’s envy of Olivia’s punishment is justified? Do you agree that, in a way, Olivia is the one who suffers the easiest punishment, because even though prison is brutal, it’s a physical, finite sentence for what they collectively did?

Nick’s is the only life that eventually falls completely apart. Do you think his drug use is related to his guilt, knowing he could’ve prevented Casey’s death? Why or why not?

Mourning and loss are themes of the book. How do the characters grieve differently? How does this grief affect their choices? In what ways can mourning be a selfish experience? What do the characters mourn besides the loss of Casey’s life?

Discuss the way parenthood and parent/child relationships are portrayed in the novel. Think about Gabe and Carmen; Rob and Heather; Nick, Carmen, and Alice’s relationships with Horace and Loretta; and even Terry and Shanna Redman.

Romantic relationships seem to be tough for all of the characters. Alice spends her time yearning for Maude (who cannot seem to decide what she wants) and sleeping with other women to fill the void, but once they are finally together, they fall out of love. Carmen’s first marriage fails, and she looks at her second as a “small mistake.” After Olivia leaves, Nick turns to prostitutes and never has a meaningful relationship again. Even Tom finds that his affair with Jean was the thing keeping his marriage together. Discuss these relationships and the dynamics within the couples.

Alice is deeply affected by her visit to the Anne Frank house, but when she tries to talk about it with Anneke, the curator politely changes the subject. “Anne Frank is complicated,” she says. What is it about the house that you feel touches Alice so deeply? Is this exchange applicable to Alice’s feelings about the accident?

When Kees Verwey sees Alice’s paintings of Casey, he says to her: “…You are honoring her with these, giving her a kind of life. What if these are the best paintings you will ever make?” Alice replies, “Then maybe not showing them is the terms of my atonement.” Do you agree with Verwey or with Alice? Do you think she should have shown them? Or do you think it would have been wrong to profit from Casey’s death, the way Tom profited from the song he writes about the accident?

When Nick visits Shanna Redmond, she says to him about Casey: “She was such a careless kid…Never looked both ways like I told her. You can tell them that. The others. Not that it was her fault. But it wasn’t all theirs either.” Do you think Nick ever passes this message along? Do you think it would have helped the others to hear it? Or at that point, was it meaningless, given all they had been through?

Alice feels Casey is dictating the paintings of her unlived life. Do you think she is? As with the ending of the book, do you feel information sometimes passes between the world of the living and that of the dead?

How much of our present is shadowed by our past? How long do we carry regrets forward?