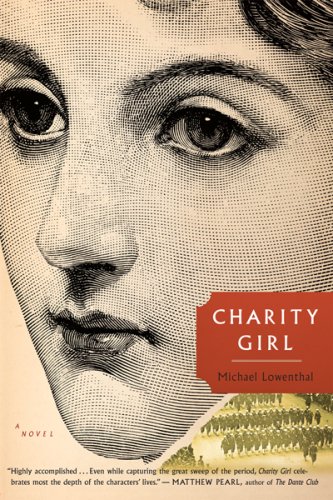 During World War I, seventeen-year-old Frieda Mintz secures a job at a Boston department store and strikes out on her own, escaping her repressive Jewish mother and marriage to a wealthy widower twice her age. Determined to find love on her own terms, she is intoxicated by her newfound freedom and the patriotic fervor of the day. That is, until a soldier reports her as his last sexual contact, sweeping her up in the government’s wartime crusade against venereal disease. Quarantined in a detention center, Frieda finds in the Home’s confines a group of brash, unforgettable women who help her see the way to a new kind of independence.

During World War I, seventeen-year-old Frieda Mintz secures a job at a Boston department store and strikes out on her own, escaping her repressive Jewish mother and marriage to a wealthy widower twice her age. Determined to find love on her own terms, she is intoxicated by her newfound freedom and the patriotic fervor of the day. That is, until a soldier reports her as his last sexual contact, sweeping her up in the government’s wartime crusade against venereal disease. Quarantined in a detention center, Frieda finds in the Home’s confines a group of brash, unforgettable women who help her see the way to a new kind of independence.

Charity Girl is based on a little-known chapter in American history that saw fifteen thousand women across the nation incarcerated. Like When the Emperor Was Divine, Lowenthal’s poignant, provocative novel will leave readers moved – and astonished by the shameful facts that inspired it.

Michael Lowenthal grew up near Washington, D.C., and graduated from Dartmouth College, after which he worked as an editor at University Press of New England, where he founded the Hardscrabble Books imprint. He is the author of two previous novels, Avoidance and The Same Embrace, as well as short stories and essays that have been widely anthologized. The recipient of fellowships from the Bread Loaf and Wesleyan writers’ conferences, the Massachusetts Cultural Council, and the Hawthornden International Retreat for Writers, Lowenthal teaches creative writing in the MFA program at Lesley University. He also serves on the executive board of PEN New England.

“Even while capturing the great sweep of the period, Charity Girl celebrates most the depth of the characters’ lives.” —Matthew Pearl, author of The Poe Shadow

At the center of the novel hangs an ethical dilemma, where the rights of the few are weighed against the health and safety of many. Would you consider the government’s moral crusade reasonable, given the circumstances of wartime? In what other way might the need to maintain a healthy army have been addressed? In what circumstances do we face similar choices today? What modern relevance does Frieda’s story have?

How would you describe Frieda Mintz’s personality, and how does Lowenthal bring her to life? Does she seem particularly rebellious or attracted to danger, or is she more a regular girl trapped in a series of bad situations? Did you find yourself sympathizing with her, identifying with her? Were you ever frustrated by her actions? Placed in her situation, would you have made the same choices that she did? How does Frieda change during the course of the book?

Charity Girl opens in Boston in 1918; at the time, employment choices for women were limited. Why does the prospect of being a shopgirl at Jordan Marsh so appeal to Frieda? Aside from her wages, how does her job benefit her?

Frieda moves to a boarding house in the city as a form of self-imposed exile from her mother and their Russian immigrant community. What other instances of banishment and displacement—self-imposed or otherwise—are found in the novel? How do these instances resonate with each other?

Frieda’s friend Lou explains the rules for the dance: “Getting treated when you pick up guys is one thing…and we’re lots of us charity girls. But it’s never just for money, straight out.” Why did the shopgirls like Lou and Frieda note such fine distinctions? Why was it important to them to set up such boundaries? What irony is there in the fact that Frieda was incarcerated nonetheless? Do you agree with Mrs. Sprague’s assessment that the so-called ‘charity girls’ are more a threat than prostitutes? Were these ‘charity girls’ exploited, do you think, by their employers, by their suitors?

Did you find Felix an honorable character? What clues does Lowenthal give about his true regard for Frieda? Why does Frieda hold such unwavering belief in the rightness of his actions?

Frieda meets many vivid women at the Home. Each of her fellow detainees—Flossie, Jo, Yetta, Hattie, Melba, Fleur—has a different response to incarceration. What factors contributed to these diverse reactions? With which woman’s response did you identify most? How do you think you might have responded if you had found yourself indefinitely detained?

Though the rounding up and subsequent detention of thousands of women like Freida seems appalling from a modern vantage, some of the characters in the book earnestly believe they are performing a public service by participating in the government’s program. What motivates Mrs. Sprague or Alice Longley or Dr. Slocum to be party to the situation? Is their participation defensible?

Biology doesn’t support Mrs. Sprague’s notion that women are more to blame than men for spreading disease. Why do you think only women were targets of the government’s detention efforts?

Set during a time of intense, perhaps overbearing, patriotism, the novel explores questions of identity and group belonging. Consider Frieda’s Jewish upbringing and her relationship to her religious identity. Felix is also Jewish, but from a well-to-do, assimilating family; does Frieda have more in common with him, because they’re both Jewish, or with the gentile girls she works with, because they’re all similarly impoverished? Yetta perhaps holds out another model of Judaism, that of an agitator for social justice. Frieda seems both drawn to and repelled by her. Why?

The novel’s epigram reads: “Charity causes half the suffering she relieves, but she cannot relieve half the suffering she has caused.” What do you think this means in the context of the novel? In the course of the story, who gives what to whom, and what, if anything, do they expect in return? If charity comes with real or perceived strings attached, can it be true charity?

Why do you think the author chose to write about the book’s subject matter as an imagined story rather than as a nonfiction account? What information does historical fiction provide that may be absent from works of history or the official record? How is the experience of reading Frieda’s story different from reading nonfiction accounts of the time? How, if at all, does the novelist’s modern perspective color the way he portrays historic characters and events? What draws you to historical novels?

Why do you suppose the historical episode on which the novel was based, which saw some 15,000 women incarcerated, remains so little known in America today? Which, if any, events of our times are in danger of being similarly lost to posterity?

Do you think, in the end, that Frieda finds redemption? What do you imagine her life is like after the War? What does the final sequence tell you about her fate? Is it an ending you would have wished for her?