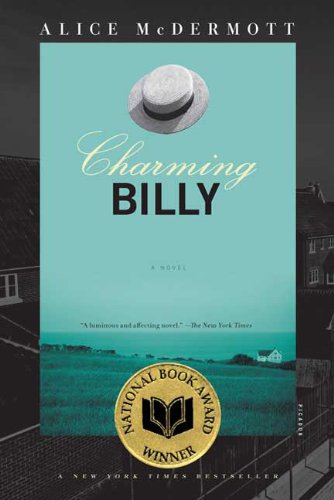 In a small bar somewhere in the Bronx, a funeral party has gathered to honor Billy Lynch. Through the night, his friends and family will weave together the tale of a husband, lover, dreamer, and storyteller, but also that of a hopeless drunk whose immense charm was but a veil over a lifetime of secrets and all-consuming sorrow. As they comfort his widow, the gentle Maeve, they remember as well his first love, Eva, who died of pneumonia, and whose ghost haunted his marriage and drove him to the bottle. Who is truly responsible for Billy’s life and death, and what does it mean to mythologize a friend’s suffering?

In a small bar somewhere in the Bronx, a funeral party has gathered to honor Billy Lynch. Through the night, his friends and family will weave together the tale of a husband, lover, dreamer, and storyteller, but also that of a hopeless drunk whose immense charm was but a veil over a lifetime of secrets and all-consuming sorrow. As they comfort his widow, the gentle Maeve, they remember as well his first love, Eva, who died of pneumonia, and whose ghost haunted his marriage and drove him to the bottle. Who is truly responsible for Billy’s life and death, and what does it mean to mythologize a friend’s suffering? Beautifully written and teeming with fine portraits of Irish-American life in New York, Charming Billy is a masterful novel about how a community can pin its dreams to one man, and how good intentions can be as destructive as the truth they were meant to hide.

Alice McDermott is the author of six novels. Her articles, reviews and stories have appeared in The New York Times, The Washington Post, The Atlantic Monthly, The New Yorker,  Redbook and elsewhere.

“Taut and beautifully written . . . Each distinct atom of reality splits under McDermott’s artisan hammer and releases a world of wild, lost particles: charm, for example, and others the physicists have not yet invented, such as grief, comedy, even happiness.”
—Los Angeles Times

“An astoundingly beautiful novel about the persistence of love, the perseverance of grief, and all-but-unbearable loneliness, as well as faith, loyalty, and redemption.”—Philadelphia Inquirer

If Billy’s wife had been beautiful, observes the narrator, “then the story of his life, or the story they would begin to re-create for him this afternoon, would have to take another turn” (p. 3). What is the accepted story of Billy’s life as presented by the mourners assembled at the funeral lunch? Which aspects of that story turn out to be false?

Rosemary says that Billy’s alcoholism was “a disease” (p. 19): Dan Lynch says that “maybe for some people it’s a disease . . . Maybe for some it’s a sadness they can’t get rid of or a disappointment that won’t go away . .. They’re loyal to their own feelings” (pp. 20-21). Dennis says that “an alcoholic can always find a reason but never needs one” (p. 35). When it comes to Billy, which of them is right?

When Dennis decides to tell Billy that Eva is dead, he thinks, “Better he be brokenhearted than trailed all the rest of his life by a sense of his own foolishness” (p. 31). Does Dennis come to change his mind later in life, to regret having told a lie? What other lies does Dennis tell Billy, and what illusions does he allow Billy to entertain?

Dennis says, “When Billy sets his heart on something there’s no changing him. He’s loyal. He’s got this faith–which is probably why he drinks” (pp. 35-36). Why does Dennis link drinking with faith? What does Dennis mean when he says Billy has faith? Is this faith connected with religious faith? “Redemption” is a favorite word of Billy’s (p. 187). What does it mean to him? What does the narrator mean when she contrasts Billy’s type of faith with Dennis’s (p. 242)?

What does the demeanor of the priest who visits Maeve and the way the assembled mourners react to him tell us about the author’s attitude toward the Church and its dogmas about life and death? What are Billy’s feelings toward these dogmas? What are Dennis’s, and what about the narrator’s?

Why does Billy love the sight of the large houses in East Hampton, and what does that say about his character and circumstances? What class attitudes are held in common by this large extended family? Kate feels she has escaped her working-class background. Has she really? In what ways has she taken on the characteristics of the upper middle class, and in what ways is she rooted in her origins?

In what ways have the life experiences of Dennis’s mother, Sheila, helped to form her character? What is her real opinion of both her husbands? When the narrator says that Sheila’s first husband “had been, without question, Holy Father to the entire clan” (p. 97), what is she implying?

Dennis seems, on the surface, to be an easygoing and simple man. What events show him to be a far more complex and sophisticated person than he might appear? How would you describe Dennis? How does his character contrast with Billy’s?

The narrator says that regarding Maeve’s relationship with her elderly father, hers “was not an unusual case . . . It was, I suppose, the very image I’d fought against myself” (p. 132). But times have changed, “self-sacrifice having been recognized as a delusion by then, not a virtue. Self-consciousness more the vogue” (p. 132). In what other ways have manners and mores noticeably changed in the years between Dennis’s youth and his daughter’s?

Dorothy says that Billy was “maybe too sensitive for this world, if you know what I mean” (p. 168). Do you agree with her?

What does Billy’s conversation with Eva at the Clonmel gas station tell the reader about Eva’s character? Do you think that Billy gets the same message—in other words, does he leave Ireland with a realistic picture of who and what she is?

Why does Billy write the message “Beautiful friend” (p. 232) to Maeve after his return from Ireland? Does it mean that he has begun to love and appreciate her for herself, without the ideal of Eva to compare her with? If so, why does his drinking intensify?

Why do you think Dennis marries Maeve after Billy’s death? Does this marriage come as a surprise to you?

In an interview about one of her earlier novels, Alice McDermott stated: “You don’t look at the past just once, and you look at it with the knowledge of the present, which was the future. I like that going over, seeing an event through other events that have occurred since, seeing it again and seeing it in a different way, from a different perspective as time goes on” (Publishers Weekly, March 30, 1992). Is this an accurate way of describing McDermott’s narrative technique in Charming Billy? Which, in your opinion, are the key events of the novel, and from how many different angles and points of view are they described?