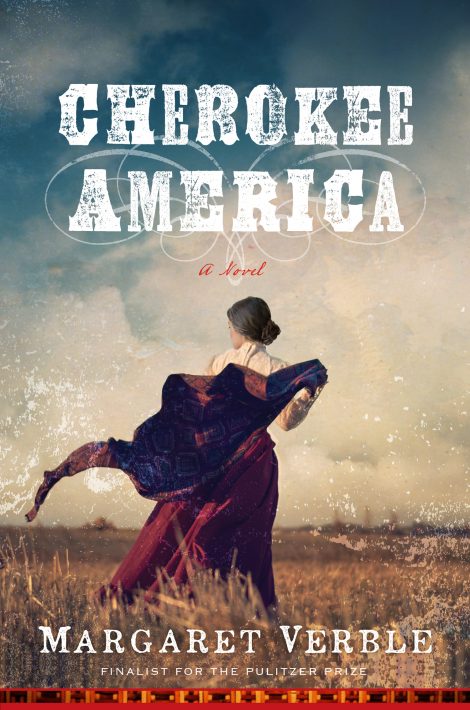 From the author of the Pulitzer Prize finalist Maud’s Line, an epic novel that follows a web of complex family alliances and culture clashes in the Cherokee Nation during the aftermath of the Civil War, and the unforgettable woman at its center.

It’s the early spring of 1875 in the Cherokee Nation West. A baby, a black hired hand, a bay horse, a gun, a gold stash, and a preacher have all gone missing. Cherokee America Singer, known as “Check,” a wealthy farmer, mother of five boys, and soon-to-be widow, is not amused.

In this epic of the American frontier,

From the author of the Pulitzer Prize finalist Maud’s Line, an epic novel that follows a web of complex family alliances and culture clashes in the Cherokee Nation during the aftermath of the Civil War, and the unforgettable woman at its center.

It’s the early spring of 1875 in the Cherokee Nation West. A baby, a black hired hand, a bay horse, a gun, a gold stash, and a preacher have all gone missing. Cherokee America Singer, known as “Check,” a wealthy farmer, mother of five boys, and soon-to-be widow, is not amused.

In this epic of the American frontier, several plots intertwine around the heroic and resolute Check: her son is caught in a compromising position that results in murder; a neighbor disappears; another man is killed. The tension mounts and the violence escalates as Check’s mixed race family, friends, and neighbors come together to protect their community—and painfully expel one of their own.

Cherokee America vividly, and often with humor, explores the bonds—of blood and place, of buried histories and half-told tales, of past grief and present injury—that connect a colorful, eclectic cast of characters, anchored by the clever, determined, and unforgettable Check.

Margaret Verble is an enrolled citizen of the Cherokee Nation of Oklahoma. Her first novel, Maud’s Line, was a finalist for the Pulitzer Prize. She lives in Lexington, Kentucky.

“Cherokee America does what all the best historical fiction does—it vividly captures its particular time and place, yet simultaneously offers valuable insights about our own era. Margaret Verble is an exceptional storyteller, and this novel will enhance her already considerable literary reputation.”—Ron Rash, author of Serena

“In Verble’s hands, this tale of a mother’s love and her gritty resolve in a shameful era of false promises and broken treaties makes for a rich, propulsive novel.”—Publishers Weekly

Check had bought everything she’d come for, but frowned at her list and pursed her lips.

She glanced at the scales on the counter. “I’ll take another three pounds of coffee, Mr. Taylor.” She folded her paper to a square and slipped it into her skirt pocket. Focused on bolts of cloth over the merchant’s head while he scooped the beans. The plinking of her purchase against the brass of the scales reminded her of hard rain on her tin roof. The sound provided some relief.

Mr. Taylor tipped the scale. Slid the beans into a burlap sack atop ten pounds already purchased. He retied the string and set his hand on a large spool of twine. “What else, Mrs. Singer?”

Check moved towards a barrel of nails. She should’ve brought Puny in with her. He’d know if they had enough. But she didn’t want to take chances. She plucked a nail from the quarter circle holding the longest. “Give me five pounds of these, please.” She looked into the dark back of the store to avoid Mr. Taylor’s eyes. He was a close friend of her husband’s, and there wasn’t anything to say about Andrew that hadn’t already been said.

Mr. Taylor came from behind his counter, scoop in one hand, burlap sack in the other. “If you need anything else, I’ll have Jim bring it out to you.”

“Yes, I know, thank you.” Check moved away from the barrel and back to the counter. She ran her fingers over ridges of wear. Was thinking she’d never noticed them before when she caught a streak of light in the sides of her eyes. She turned as sunlight and a young man in a blue shirt burst into the store together.

Check Singer was related to many people in the Nation. But not to that particular youth. His people, she thought, were from somewhere like Maryland, or maybe Vermont. Being called “aunt” by anyone other than kin made her feel old. She responded, “Thank you. But I’m not your aunt, Jim.”

“No ma’am, Mrs. Singer. But she’s loaded anyways.” Jim pressed his hands down the front of his pants. “I didn’t mean disrespect.”

Check shook her head. She knew she was irritable. But words to tamp her reactions were dammed off inside her. She tried to soften her face with her eyes. She liked Jim. He was long-legged and a worker. His lopsided smile and sandy hair would soon catch the eye of a girl. But not one of Mr. Taylor’s. His eldest, Florence, was being sparked by her oldest, Connell. How that would develop, Check didn’t know. And didn’t have time to think on. But all three of the Taylor daughters would marry improved land. Jim, a white, couldn’t improve any land without stealing it. And Suzanne Taylor would never condone that. Check turned back to Mr. Taylor. “I’ll send Puny if I need anything. And either Connell or Hugh will be around with a checkbook at the end of the month.” She hesitated, then added, “No matter what.”

“Don’t worry about sending Puny. Get me word, and I’ll get it there. We want to help as much as we can.” Taylor hoped Florence would marry Connell. The Singers paid with money drawn on an Ohio bank, not with produce or specie certificates. And Check Singer was a Lowrey, and the daughter of Colonel Gideon Morgan.

“I know. Thank you, Mr. Taylor.” Check turned towards the door and Jim.

She turned back around.

“He’s in good hands, Check.” The storeowner’s stubble of new beard made him look more like a drunk than an affluent merchant. His head bobbed awkwardly, but the informality of address was an attempt to convey the depth of his feelings.

“Yes, Nash. I know. Thank you.” Check turned again, nodded, not directly at Jim but at the blue shirtsleeve holding the door. She walked towards the bright morning. Behind her, Nash barked, “Pack Mrs. Singer’s coffee and nails.”

Check staggered, overwhelmed with sunshine. It was still early in the planting season. The front of the store faced south and west, where the weather came from. She looked at the planks to get her bearings. Her ribcage was penned to a funnel by her corset; she feared for a moment she wouldn’t be able to breathe. She gulped, and reminded herself to take deeper breaths. That winter was over, and bodies need fresh air like houses and rugs. Jim slipped past her and was putting her last purchases into her wagon when she heard steps on the planks behind her. Words came in a shout before she turned. “You through, Mama?” Clifford was on her.

Check stepped back. “Yes, get the reins.”