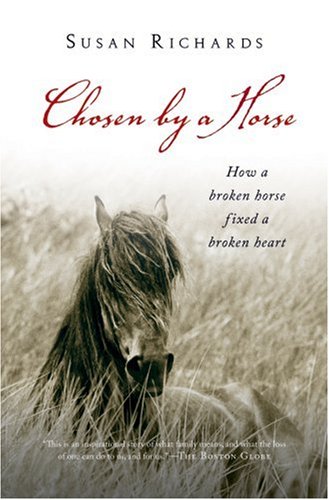 CHOSEN BY A HORSE

The horse Susan Richards chose for rescue wouldn’t be corralled into her waiting trailer. But Lay Me Down, a former racehorse with a foal close on her heels, walked right up that ramp and into Susan’s life. Weak from malnutrition, Lay Me Down had endured a rough road, but somehow her heart was still open and generous. Then fate brought her into Susan’s paddock, where she taught this brokenhearted women how to embrace the joys of life despite the dangers of living.

The horse Susan Richards chose for rescue wouldn’t be corralled into her waiting trailer. But Lay Me Down, a former racehorse with a foal close on her heels, walked right up that ramp and into Susan’s life. Weak from malnutrition, Lay Me Down had endured a rough road, but somehow her heart was still open and generous. Then fate brought her into Susan’s paddock, where she taught this brokenhearted women how to embrace the joys of life despite the dangers of living.

Susan Richards has a BA in English from the University of Colorado and a Master of Social Work degree from Adelphi University. She lives in Olivebridge, New York, and teaches writing at SUNY Ulster and Marist College.

“This is an inspirational story of what family means, and what the loss of one can do to us, and for us.” —The Boston Globe

“Two kindred spirits find each other in this beautifully written memoir about the human-animal bond.” —Temple Grandin, author of Animals in Translation

“Susan Richards thought she was rescuing a starved, abused and abandoned mare..Turns out Lay Me Down was rescuing Susan Richards. An incredibly moving story, beautifully written and insightful.” —The Roanoke Times

“Important lessons about courage, kindness and grief.” —The Hartford Courant

How are Susan’s horses a substitute for a human family? What needs do they fulfill that people in her life cannot? Does Susan use her horses to escape from “real life” (the pressures of romantic relationships, loneliness, et cetera), or do they represent it?

How do Susan’s past struggles—the loss of her parents, her abusive childhood, her alcoholism, and her divorce—continue to affect her life on a daily basis so many decades later?

Susan often jumps around chronologically as she tells her story. What effect does this have on the reader and on the presentation of Susan’s life?

Susan’s friend Allie often accuses her of “anthropomorphizing” her animals. How do the horses in Susan’s paddock resemble human characters? What effect does this have on the power of her memoir? Does this literary technique place her memoir in line with other classic animal stories? Did this book remind you of any of your childhood favorites? In what ways?

Susan accuses Georgia of engaging in “rude” horse behavior, such as nudging her pockets looking for treats and blocking the other horses from entering the stable. Later Susan states, “If [Georgia] was a person I’d hate her.” Why do you think Susan indulges Georgia and allows this kind of behavior from her? What about Georgia’s personality makes her lovable as a horse but not as a person?

What function does Hank serve in Susan’s life? Would she have been better off if he had not called her six years later? If he had not been allergic to horses, would Susan have been able to commit herself to him as a partner?

Early on Susan states that “names are important to horse people.” When she initially imagines shouting Lay Me Down’s name across a pasture she feels that she has gotten a “loser” because “you couldn’t get a nickname out of it.” How do Susan’s feelings about her horse’s name change as her memoir progresses? How do you feel about Lay Me Down’s name by the close of the book?

What does Lay Me Down’s calm and trusting demeanor, even after a traumatic past, say about the “nature versus nurture” argument?

In what way do you feel the author was “chosen” by Lay Me Down? Could she have been chosen by another person, or another animal, and still have learned the same lessons about her life that she learns in this book?

Animals are often said to possess healing influences—some studies suggest that elderly people who keep pets have lower rates of heart disease, stroke, and depression. What do you think it is about animals that humans find so calming? Is this something humans can’t provide for each other? Do you have a particular pet that seemed to have a special effect on you?

At the start of her memoir Susan speaks about her “aversion to illness”—her tendency to avoid hospitals, sickness, and “anything medical. In caring for Lay Me Down she is forced to confront illness head on. How does this help Susan grow, heal, and come to terms with her past?

The death of a pet can always be traumatic for its owners. How was Lay Me Down’s time with Susan Richards different from that of an average pet? How does Lay Me Down’s death affect Susan? Is this a normal reaction to the loss of an animal friend? If not, how and why?

What do you think the author has learned through the events described in the book? Would Susan’s life have been easier, and less painful, if she had avoided an emotional connection with a damaged horse? Can we arrange our lives in ways that help us to avoid suffering? If so, at what cost?