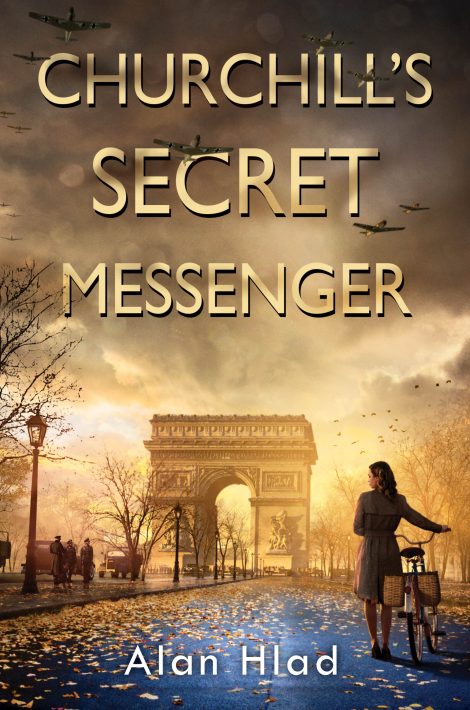 Recruited from Churchill’s typing pool to become an undercover spy in German-occupied France, a young woman from London bravely endures daring missions, audacious escapes, and a harrowing imprisonment in a Nazi concentration camp, risking everything for the country – and the man – she loves.

London, 1941: In a cramped bunker in Winston Churchill’s Cabinet War Rooms, civilian women huddle at desks, typing up confidential documents and reports. Since her parents were killed in a bombing raid, Rose Teasdale has spent more hours than usual in Room 60. Winning the war is the only thing that matters to her now,

Recruited from Churchill’s typing pool to become an undercover spy in German-occupied France, a young woman from London bravely endures daring missions, audacious escapes, and a harrowing imprisonment in a Nazi concentration camp, risking everything for the country – and the man – she loves.

London, 1941: In a cramped bunker in Winston Churchill’s Cabinet War Rooms, civilian women huddle at desks, typing up confidential documents and reports. Since her parents were killed in a bombing raid, Rose Teasdale has spent more hours than usual in Room 60. Winning the war is the only thing that matters to her now, and she is dedicated to doing her part. When Rose’s fluency in French comes to the attention of Churchill himself, it brings a rare yet dangerous opportunity…

Rose is recruited for the Special Operations Executive, a secret British organization that conducts espionage in Nazi-occupied Europe. After weeks of grueling training, Rose parachutes into France with a new codename: Dragonfly. Posing as a cosmetics saleswoman in Paris, she ferries messages to and from the Resistance, knowing that the slightest misstep means capture or death.

Soon Rose is assigned to a mission with Lazare Aron, a Jewish French Resistance fighter who has dedicated himself to the cause with the same fervor as Rose. Yet Rose’s very loyalty brings risks as she undertakes a high-stakes prison raid, and discovers how much she may have to sacrifice to justify Churchill’s faith in her…

Alan Hlad is the internationally bestselling author of The Long Flight Home and Churchill’s Secret Messenger. He is also president of an executive search firm, a frequent conference speaker, and a member of the Historical Novel Society, Literary Cleveland, and the Akron Writers’ Group.  He lives in Ohio with his wife and children.

PRAISE FOR THE LONG FLIGHT HOME

“A story of loss and heartbreak, sacrifice and compassion, The Long Flight Home is ultimately a story of hope.” —The New York Journal of Books

1. The Special Operations Executive (SOE), also known as “Churchill’s Secret Army,” was a real organization during WWII. Of its 470 agents in German-occupied France, 39 were women, many of whom were captured, tortured, and killed. What do you think Churchill saw in Rose that influenced him to have her recruited for the SOE? What do you think motivated Rose to join the SOE?

2. A number of historical figures make appearances in Churchill’s Secret Messenger, including Winston Churchill and General Charles de Gaulle. Did you recognize any other characters as people who existed in real life?

3. Why do you think Rose and Muriel bonded so quickly as friends? Why is Rose determined to survive Ravensbrück Concentration Camp and deliver a message to Muriel’s daughter, Mabel?

4. What makes Felix a competent SOE network organizer? What are his weaknesses as a leader?

5. While working in German-occupied France, Rose and Lazare fall in love. What brings them together? At what point do you think Rose realizes she loves Lazare? How is the war, particularly the risk of being captured by the SD, a catalyst for their affection?

6. Prior to reading the book, what did you know about the Vel’ d’Hiv roundup? What could Lazare have done to save his parents?

7. Operation Jericho was a real-life RAF bombing raid on Amiens Prison, one day before over 100 French Resistance prisoners were scheduled to be executed. The name of the person who requested this actual mission remains a secret—even to this day. How likely do you think it was that a female SOE agent such as Rose was the true mastermind behind Operation Jericho? If you were Rose, would you have arranged the bombing raid, knowing that it might kill the person you love? What are the consequences of Operation Jericho?

8. How do you envision what happens after the end of the book? Do you think Rose will remain bound to her oath of secrecy? What do you think her life will be like?

On the one hundred fifty-ninth day of Hitler’s bombing of Britain, Rose Teasdale was typing correspondence in Room 60 of Winston Churchill’s underground Cabinet War Rooms. A soft patter of keys, striking the inked-cloth ribbon, emanated from her Remington Noiseless typewriter. As typists pressed their carriage return levers, their eyes remained steadfast on their handwritten notes. The secretarial staff—crammed inside the masonry bunker with several switchboard operators—was drafting documents generated by a frenzied afternoon of cabinet meetings.

“One of your reports will help lead us to victory,” Rose whispered to Lucy, a young bespectacled typist sitting next to her.

Lucy, her shoulders slumped from fatigue, smiled and increased her words-per-minute pace.

Room 60, a twenty-by-twenty-foot bunker deep beneath the Treasury building in Westminster, was one of several chambers in Churchill’s Cabinet War Rooms. Instead of containing military officials, Room 60 was comprised of civilian women. Seven switchboard operators, wearing headsets and poking corded plugs into a wall of communication circuitry, sat on swiveling bar-like stools with their backs to the typists. The rest of the space was comprised of several typists sitting at small wooden desks. It was a tight space for the women, but Rose, a petite five-foot-tall twenty-two-year-old woman, didn’t mind the cramped quarters. Unlike the other women, who were much taller, Rose had short legs that fit splendidly under her desk.

Some of the typists, including Rose, were products of Mrs. Hoster’s Secretarial Training College in London, which had a brilliant reputation for turning out dependable assistants. And Rose believed that this schooling likely had something to do with her accelerated path to Room 60. She had not set out to work in the heart of the British military command. But when Hitler began his aerial bombing campaign on London back in September, Rose—working as a secretary in the Treasury building—was provided security clearance, led by a military guard to the basement of the building, and given a new assignment: typist for the Cabinet War Rooms.

The initial days of working in the war rooms were unnerving for Rose. The close proximity of the prime minister and senior officers gave her a bout of the jitters, causing her to type mistakes and, on one occasion, spill a tepid cup of tea on a document she had drafted. The burnt scent of Churchill’s cigar, which lingered in the stagnant basement air, had turned her stomach sour. To compound matters, the Luftwaffe air raids, which occurred on an almost nightly basis, had forced many Londoners to spend nights in shelters. And when she wasn’t sleeping between shifts in the sub-basement below the war rooms, often referred to as the “dock,” Rose had spent nights—as the city was bombarded—with her parents in the Bethnal Green tube station.

As days passed, Rose grew accustomed to the gruff demeanor of Churchill and his staff. Their fortitude will help us survive, Rose told herself, typing a confidential report on potential locations where Hitler would commence a land invasion of Britain. The thought of Nazis marching through London sent chills up her spine. Rose, like most Londoners, forced herself to carry on, despite the horrid destruction and loss of life. But the source of Rose’s resilience wasn’t entirely self-motivated. It was fueled, Rose believed, by the death of her brother, Charlie.