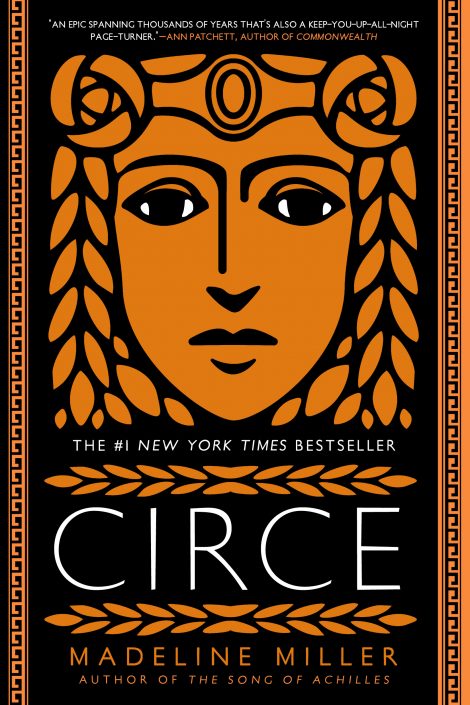 The daring, dazzling and highly anticipated follow-up to The Song of Achilles, which brilliantly reimagines the life of Circe, formidable sorceress of The Odyssey.

In the house of Helios, god of the sun and mightiest of the Titans, a daughter is born. But Circe is a strange child—not powerful, like her father, nor viciously alluring like her mother. Turning to the world of mortals for companionship, she discovers that she does possess power— the power of witchcraft, which can transform rivals into monsters and menace the gods themselves.

The daring, dazzling and highly anticipated follow-up to The Song of Achilles, which brilliantly reimagines the life of Circe, formidable sorceress of The Odyssey.

In the house of Helios, god of the sun and mightiest of the Titans, a daughter is born. But Circe is a strange child—not powerful, like her father, nor viciously alluring like her mother. Turning to the world of mortals for companionship, she discovers that she does possess power— the power of witchcraft, which can transform rivals into monsters and menace the gods themselves.

Threatened, Zeus banishes her to a deserted island, where she hones her occult craft, tames wild beasts and crosses paths with many of the most famous figures in all of mythology, including the Minotaur, Daedalus and his doomed son Icarus, the murderous Medea, and, of course, wily Odysseus.

But there is danger, too, for a woman who stands alone, and Circe unwittingly draws the wrath of both men and gods, ultimately finding herself pitted against one of the most terrifying and vengeful of the Olympians. To protect what she loves most, Circe must summon all her strength and choose, once and for all, whether she belongs with the gods she is born from, or the mortals she has come to love.

With unforgettably vivid characters, mesmerizing language and page-turning suspense, Circe is a triumph of storytelling, an intoxicating epic of family rivalry, palace intrigue, love and loss, as well as a celebration of indomitable female strength in a man’s world.

Madeline Miller was born in Boston and attended Brown University where she earned her BA and MA in Classics. She lives in Narbeth, PA with her husband and two children. The Song of Achilles was awarded the Orange Prize for Fiction and has been translated into twenty- five languages.

Winner of the 2019 Indie Choice Award
Shortlisted for the 2019 Women’s Prize for Fiction
Named one of the ‘Best Books of 2018’ by NPR, The Washington Post, Buzzfeed, People, Time, Amazon, Entertainment Weekly, Bustle, Newsweek, the A.V. Club, Christian Science Monitor, Southern Living, and Refinery 29.

“Circe,’ [is] a bold and subversive retelling of the goddess’s story that manages to be both epic and intimate in its scope, recasting the most infamous female figure from the Odyssey as a hero in her own right.”—Alexandra Alter, New York Times

“One of the most amazing qualities of this novel [is]: We know how everything here turns out – we’ve known it for thousands of years – and yet in Miller’s lush reimagining, the story feels harrowing and unexpected. The feminist light she shines on these events never distorts their original shape; it only illuminates details we hadn’t noticed before.”—Ron Charles, Washington Post

“[Miller] gives voice to Circe as a multifaceted and evolving character…’Circe’ is very pleasurable to read, combining lively versions of familiar tales and snippets of other, related standards with a highly psychologized, redemptive and ultimately exculpatory account of the protagonist herself.”—Claire Messud, New York Times Book Review

“The story of Circe’s entanglement with Odysseus lasts far beyond the narrative of ‘The Odyssey,’ making for compelling material to revisit. But ultimately it’s as a character that Circe stands apart….Through her elegant, psychologically acute prose, Miller gives us a rich female character who inhabits the spaces in between.” —Colleen Abel, Minneapolis Star Tribune

“Miller’s lush, gold-lit novel – told from the perspective of the witch whose name in Greek has echoes of a hawk and a weaver’s shuttle – paints another picture: of a fierce goddess who, yes, turns men into pigs, but only because they deserve it.”—NPR.org

“So vivid, so layered, you could get lost in it… Whether or not you think you like Greek Mythology, this is just great storytelling. It feels cinematic.”— NPR’s Here & Now

“Spellbinding.. Miller has created a daring feminist take on a classic narrative; although the setting is a mystical world of gods, monsters, and nymphs, the protagonist at its heart is like any of us.”—O Magazine

1. Circe struggles to find a place for herself as a woman in a man’s world. What parts of her experience resonate with modern day challenges that women face?

2. A central theme of Homer’s Odyssey is a longing for “nostos”— homecoming. In what way does that theme resonate with Circe’s story?

3. How does Circe’s encounter with Prometheus change her? How does it continue to affect her actions?

4. Throughout the novel Circe draws distinctions between gods and mortals. How are each of them portrayed? How does Glaucus change when he becomes a god?

5. Circe wonders if parents can ever see their children clearly. She notes that so often when looking at our children “we see only the mirror of our own faults.” What parts of herself does she see when she looks at Telegonus? What are her strengths and weaknesses as a parent to him?

6. Circe’s sister Pasiphaë begins the novel as a major antagonist. How does our perspective of her change after Circe’s visit to Crete?

7. Circe begins the novel feeling very close to her baby brother Aeëtes. Why do their paths diverge so wildly? Why do you think he make the choices he does?

9. Circe says to Telemachus “Do not try to take my regret from me.” What does she mean by that? How has her regret shaped her?

10. There are numerous references to crafts in the novel, including weaving, carpentry and metal-working. What role does craft play in Circe’s story?

11. How does Circe’s relationship with her father change over the course of the book? What do you make of their final conversation?

12. We see numerous powerful characters abusing their positions throughout the story. Are power and abuse necessarily connected? Are there any models for power without cruelty?