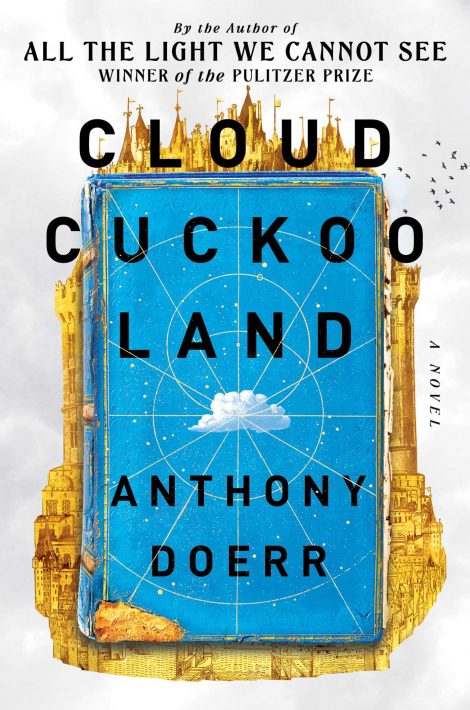 From Anthony Doerr, the Pulitzer Prize–winning author of All the Light We Cannot See, comes Cloud Cuckoo Land, a hauntingly beautiful novel about the power of books to unite us.

Set in Constantinople in the fifteenth century, in a small town in present-day Idaho, and on an interstellar ship decades from now, Anthony Doerr’s gorgeous third novel is a triumph of imagination and compassion, a soaring story about children on the cusp of adulthood in worlds in peril, who find resilience,

From Anthony Doerr, the Pulitzer Prize–winning author of All the Light We Cannot See, comes Cloud Cuckoo Land, a hauntingly beautiful novel about the power of books to unite us.

Set in Constantinople in the fifteenth century, in a small town in present-day Idaho, and on an interstellar ship decades from now, Anthony Doerr’s gorgeous third novel is a triumph of imagination and compassion, a soaring story about children on the cusp of adulthood in worlds in peril, who find resilience, hope—and a book. In Cloud Cuckoo Land, Doerr has created a magnificent tapestry of times and places that reflects our vast interconnectedness—with other species, with each other, with those who lived before us, and with those who will be here after we’re gone.

Thirteen-year-old Anna, an orphan, lives inside the formidable walls of Constantinople in a house of women who make their living embroidering the robes of priests. Restless, insatiably curious, Anna learns to read, and in this ancient city, famous for its libraries, she finds a book, the story of Aethon, who longs to be turned into a bird so that he can fly to a utopian paradise in the sky. This she reads to her ailing sister as the walls of the only place she has known are bombarded in the great siege of Constantinople. Outside the walls is Omeir, a village boy, miles from home, conscripted with his beloved oxen into the invading army. His path and Anna’s will cross.

Five hundred years later, in a library in Idaho, octogenarian Zeno, who learned Greek as a prisoner of war, rehearses five children in a play adaptation of Aethon’s story, preserved against all odds through centuries. Tucked among the library shelves is a bomb, planted by a troubled, idealistic teenager, Seymour. This is another siege. And in a not-so-distant future, on the interstellar ship Argos, Konstance is alone in a vault, copying on scraps of sacking the story of Aethon, told to her by her father. She has never set foot on our planet.

Like Marie-Laure and Werner in All the Light We Cannot See, Anna, Omeir, Seymour, Zeno, and Konstance are dreamers and outsiders who find resourcefulness and hope in the midst of gravest danger. Their lives are gloriously intertwined. Doerr’s dazzling imagination transports us to worlds so dramatic and immersive that we forget, for a time, our own. Dedicated to “the librarians then, now, and in the years to come,” Cloud Cuckoo Land is a beautiful and redemptive novel about stewardship—of the book, of the Earth, of the human heart. 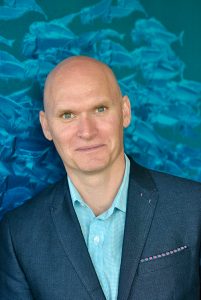 Anthony Doerr is the author of All the Light We Cannot See, winner of the Pulitzer Prize, the Carnegie Medal, the Alex Award, and a #1 New York Times bestseller. He is also the author of the story collections Memory Wall and The Shell Collector, the novel About Grace, and the memoir Four Seasons in Rome. He has won five O. Henry Prizes, the Rome Prize, the New York Public Library’s Young Lions Award, the National Magazine Award for fiction, a Guggenheim Fellowship, and the Story Prize. Born and raised in Cleveland, Ohio, Doerr lives in Boise, Idaho, with his wife and two sons.

“A welcome read that is a celebration of both resilience and hope told from the perspective of children set worlds (and times) apart. An unforgettable epic from a master storyteller at the top of his craft.”—B&N Reads

“A poignant story told with heart and wit, . . .  [with] short, lively chapters [that] move at a lively clip.”—Real Simple

“A stunning, mind-bending tale of survival and how closely we’re all connected.” –Good Housekeeping

“Doerr’s first book since his Pulitzer Prize-winning All the Light We Cannot See and even grander in conception and delivery . . . . [Cloud Cuckoo Land] is a glorious golden mesh of stories that limns that the transformative power of literature and our need to both dream big and arrive back home in a world that will eventually flow on without us. Highly recommended.”
—Library Journal, starred review

“Doerr builds a community of readers and nature lovers that transcends the boundaries of time and space … This is just one of the many narrative miracles worked by the author as he brings a first-century story to its conclusion in 2146. As the pieces of this magical literary puzzle snap together, a flicker of hope is sparked for our benighted world.”—Kirkus, starred review

“Doerr demonstrates a singular gift for bringing these complex, fully realized characters to empathetic life in this brilliantly imagined story, which moves backward and forward in time … One of the joys of readingCloud Cuckoo Land is discovering the threads that link the five characters’ lives, which ultimately cohere in ways that are simply unforgettable, as is this amazing gift of a novel.”—Booklist, starred review

1. Consider Sybil, the omnipresent, teacherly AI system aboard the Argos, to whom we are introduced in the prologue. Sybil’s core objective is to keep the crew safe. As the novel progresses, Sybil’s objective remains the same, but her role in Konstance’s story grows more and more complicated. How does your opinion of Sybil change as the novel progresses? In your opinion, is she a sinister character, a benevolent one, or neither?

2. Early on in the novel, Anna is enchanted by an ancient fresco in an archer’s turret; each time she looks at it, “something stirs inside her, some inarticulable sense of the pull of distant places, of the immensity of the world and her own smallness inside it” (page 36). How does Anna’s response to the image of Cloud Cuckoo Land compare to Aethon’s when he envisions a city in the clouds in Folio D? What does Cloud Cuckoo Land represent for each of them?

3. Libraries play a central role throughout the novel, both as sanctuaries for children and as stewards of knowledge. Compare the library in Lakeport and the one aboard the Argos. How does the virtual library of Konstance’s time differ from the library in modern-day Idaho? In what ways are they similar? Imagine a library in the year 2200 AD. What does your futuristic library look like?

4. In the immediate lead-up to the siege of Constantinople, Anna and Omeir suffer personal tragedies on opposite sides of the city walls. How does the loss of Maria, Moonlight, and Tree affect these characters? What do you think would have happened to them had they not encountered one another in the forest outside Constantinople?

5. After the death of Trustyfriend, Seymour falls into deeper and deeper mourning for his beloved forests and their inhabitants. As a teenager, he becomes enraptured with a militant environmental justice group, lead by a mysterious figurehead known only as “Bishop.” In what ways does Seymour’s ideology initially match that of Bishop’s group? How does Seymour’s ideology in his adolescence compare to his thinking later in life? In your opinion, what accounts for the change?

6. Throughout the novel, Konstance wonders what drove her father to join the crew of the Argos. Name a few plausible motivations. If you were in his position, would you be willing to accept a spot on the Argos and leave the Earth forever? Why, or why not? Topics & Questions for Discussion n Simon & Schuster

7. Consider Zeno’s epiphany—that “Diogenes, whoever he was, was primarily trying to make a machine that captured attention, something to slip the trap” (page 490). Why is this realization so important to Zeno? What is an example of a story that was meaningful to you during your childhood, and what impact has it had on your life?

8. To gain entry to Cloud Cuckoo Land, Aethon must correctly answer a riddle. “He that knows all that Learning ever writ, knows only this.” The correct answer is “nothing.” Recall that this section of the original Greek manuscript was too eroded to read. Why do you think Zeno chose to complete the riddle in this way?

9. On page 534, Omeir thinks to himself, “All my life…my best companions cannot speak the same language as me.” What does he mean? What role does Omeir’s empathy for all creatures, regardless of their ability to communicate verbally, play in the story?

10. Ilium employs Seymour to help overwrite “potentially undesirable items inside the raw image sets” (page 562). Over the years, Seymour begins to rebel, hiding bits of code in Ilium’s system that, if touched, reveal the gritty reality beneath the corporation’s glossy alterations. Why does Seymour decide to stop cooperating with Ilium? Do you agree with Seymour, that it is important to remember the past in its entirety, sadness, ugliness, and all? Why or why not?

11. Consider the two possible endings to Aethon’s story. Based on Zeno’s translation up to Folio X, which path do you think Antonius Diogenes intended Aethon to take? Why do the children at the Lakeport library prefer the version in which Aethon returns home, and how would your perception of Diogenes’s tale be different if Aethon had remained in Cloud Cuckoo Land? How would it have changed your perception of Doerr’s novel as a whole?

12. Consider the many examples of nostos, or “homecoming,” in the novel: Konstance breaks free from the Argos and embarks on a life on Earth; Zeno returns home after the war to his quiet life in Lakeport; Omeir, too, returns home from war, to his beloved village in the Bulgarian hills; Seymour finds himself drawn to the virtual version of the hometown he left behind; Anna, always so restless, finds a peaceful life of love and intellectual freedom with Omeir. Which story did you connect with the most, and why? In your opinion, what does the novel have to say about the value of “home”?

13. Konstance’s narrative bookends the novel. Why do you think the author chose to start and finish Cloud Cuckoo Land with her story?