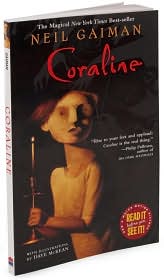 When Coraline steps through a door to find another house strangely similar to her own (only better), things seem marvelous.

But there’s another mother there, and another father, and they want her to stay and be their little girl. They want to change her and never let her go.

Coraline will have to fight with all her wits and courage if she is to save herself and return to her ordinary life.

When Coraline steps through a door to find another house strangely similar to her own (only better), things seem marvelous.

But there’s another mother there, and another father, and they want her to stay and be their little girl. They want to change her and never let her go.

Coraline will have to fight with all her wits and courage if she is to save herself and return to her ordinary life.

Bestselling author Neil Gaiman has long been one of the top writers in modern comics, and has also penned many books for readers of all ages, including American Gods, Anansi Boys, Coraline, and M Is for Magic. He is listed in the Dictionary of Literary Biography as one of the top ten living post-modern writers, and is a prolific creator of works of prose, poetry, film, journalism, comics, song lyrics, and drama. He has written multiple New York Times bestselling books, and is a Hugo, Nebula, Bram Stoker, SFX, and Locus Award winner. He has also worked in support of First Amendment rights, and was awarded the Defender of Liberty Award in August 1997 by the Comic Book Legal Defense Fund for his efforts. Born and raised in England, Neil now lives near Minneapolis, Minnesota. He has somehow reached his forties and tends to always need a haircut.

Dave McKean is best known for his work on Neil Gaiman’s Sandman series of graphic novels and for his CD covers for musicians from Tori Amos to Alice Cooper. He also illustrated Neil Gaiman’s picture books The Day I Swapped My Dad for Two Goldfish, The Wolves in the Walls, and Crazy Hair. He is a cult figure in the comic book world, and is also a photographer.

“Coraline is by turns creepy and funny, bittersweet and playful…can be read quickly and enjoyed deeply.”—San Francisco Chronicle Book Review

Describe Coraline. What kind of a person is she? How does she like to spend her time?

How is Coraline treated by her parents? Who are the other adults in Coraline’s life and how do they treat her? What is the difference between how she is treated in the real world and the other world?

Before entering the other world, Coraline receives ominous warnings about her future. What are the warnings and from whom does she receive them? What do the messages mean?

When Coraline discovers her parents are missing, she calls the police (pp. 54-55). What does she tell the officer? How does he respond? Why? How would you respond if you were the officer? Why? What would you have done if you were in Coraline’s situation?

The other mother tells Coraline: “We’re ready to love you and play with you and feed you and make your life more interesting.” (pp. 60) How is Coraline’s life with her other family different from life with her real family? What does Coraline find appealing about life in the other world? What family would you choose? Why?

Coraline’s other mother tells her that if she wants to stay in the other world there is one thing she must do. What is it? What effect will it have on her?

Why does the other mother want Coraline? What does the cat think about this (pp. 65)? Why has she taken the other children and Coraline’s parents?

Do the mirrors Coraline encounters in the real world and the other world reflect reality or illusion? How do you know? What is the significance of mirrors in Coraline?

When Coraline finds her other father in the basement he tells her to flee (p. 112). When she refuses he turns on her, and tries to harm her. How does Coraline respond? What happens as a result?

Coraline explains to the old man upstairs, “I don’t want whatever I want. Nobody does. Not really. What kind of fun would it be if we just got everything we wanted? Just like that, and it didn’t mean anything. What then?” (p. 120) Do you agree or disagree with Coraline? Explain your thinking. How would you respond to her question?

How does Coraline’s life change when she returns to the real world with her parents? What does Coraline learn from the experience of being in the other world?