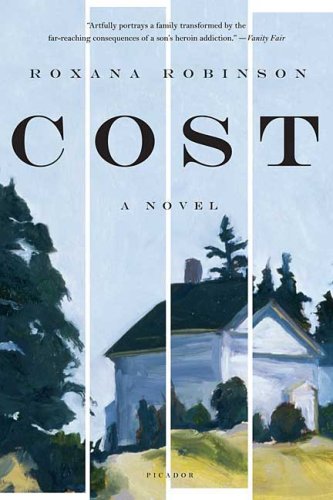 Hailed as “one of our best writers” by The Washington Post’s Jonathan Yardley, Roxana Robinson writes fiction that deftly explores the limits of human endurance, opening our eyes to the subtle landscape of memory and fate. In Cost, she brings us the gripping story of a fragile family tested when a son spirals into addiction.

The novel opens as art professor Julia Lambert, in her beloved summer house in Maine, settles into a visit from her aging parents. Her mother is beginning her descent into Alzheimer’s, while her father, who was once a renowned neurosurgeon,

Hailed as “one of our best writers” by The Washington Post’s Jonathan Yardley, Roxana Robinson writes fiction that deftly explores the limits of human endurance, opening our eyes to the subtle landscape of memory and fate. In Cost, she brings us the gripping story of a fragile family tested when a son spirals into addiction.

The novel opens as art professor Julia Lambert, in her beloved summer house in Maine, settles into a visit from her aging parents. Her mother is beginning her descent into Alzheimer’s, while her father, who was once a renowned neurosurgeon, copes with his helplessness in the face of her illness. Julia’s son Steven arrives with a troubling revelation: his brother, Jack, is showing signs of heroin use. Before the summer is over, Julia will find herself navigating the difficult dual roles of daughter and mother as she tries to restore those she loves to an impossible realm of healing and compassion. Reconnecting with her self-absorbed ex-husband and her estranged sister, Julia slowly discovers the limits of her power as her son’s substance abuse begins to permeate their lives. Yet she also discovers her far-reaching capacity for love, weighing her bulwark against a looming tide of loss.

Roxana Robinson is the author of three earlier novels, three collections of short stories, and the biography Georgia O’Keeffe: A Life. Her work has appeared in The New Yorker, Harper’s Magazine, The Washington Post, The Wall Street Journal, More, and Vogue, among other publications.

“Scarily good . . . with such fierce moments of anxiety and grief, this is, frankly, a challenging novel to read, but Robinson’s insight makes it impossible to break away.”—The Washington Post

“Pitch-perfect . . . Cost is unusual for being as plot-driven as it is character-driven, and the assured manner in which Robinson builds toward the inevitable train wreck is matched by her acuity in bringing us inside the characters’ minds.”—The New York Times Book Review

“Cost is unsparing but not bleak. It is both lyrical and unsentimental, richly honest and humane–summer reading of uncommon stature.”—The Wall Street Journal

“[A] piercing novel . . . Robinson has always been a sensitive and revelatory writer, but she attains new degrees of intensity here. . . . Her illuminations of the churning inner lives of her smart and deep-feeling characters depict good people facing brutal forces beyond the reach of reason and love.”—Booklist

Discuss the novel’s title. What are the many costs—emotional and material— associated with Jack’s addiction? What other circumstances lead the characters to consider their self-worth, or the “worth” of others?

What does the house in Maine represent to Julia at various points in her life? How does the house set the tone for the novel: picturesque, laden with memories, and in need of repair?

What does Cost tell us about the nature of marriage? What enabled Edward and Katharine to sustain their marriage? How does Wendell justify his affair? Is Harriet wise to avoid marriage, pursuing long-term relationships instead?

What are the repercussions of the parenting styles presented in the novel? Was Julia harmed by Edward’sjudgmental nature? To what extent was Jack’s life a response to the way he perceived his parents?

Does Carpenter change Julia’s family, or are they unaffected by his talk of loving interactions? What is captured in the moment when Edward mentally corrects Carpenter, asserting that addiction is not an illness (chapter twenty-seven)? Does Edward have different standards for the ill? Where does he believe self-determination ends and nature begins?

Steven is haunted by his parents’ infidelity. Why does he blame his mother more easily than his father? How do Julia’s memories of Eric shape the way she sees herself?

What accounts for the difference between Jack and Steven, who uses his rebellion for noble causes (such as protesting against loggers)? Would Steven have been an achiever if his brother had not been so troubled?

What portraits of the mind are offered in Cost? How does Edward feel about his memories of being a pioneering surgeon? What remains of Katherine despite her fading memory? What realities doeseach character create in the face of a disorienting world?

In chapter thirty-two, Julia tells Jack that he has to try harder. Is Julia naïve or simply afraid of what lies in store for her son? How do the other members of the family respond to both the psychological and the neurological fallout of his addiction? Why is it easier for Julia to acknowledge her parents’ faltering health, while Harriet wants to believe that they are just fine?

What aspects of Julia’s life emerge during her gallery opening? What is the significance of Harriet’s presence there?

What were you thinking as you read the novel’s closing scenes? Which characters had changed the most, along with your impressions of them?

How would you and your family have responded to a situation like Jack’s? What do you believe can or should be done to address the needs of those with such severe addictions?

What themes are woven throughout this and other novels and stories by Roxana Robinson? What is unique about the approach she uses in bringing Julia’s situation to life?