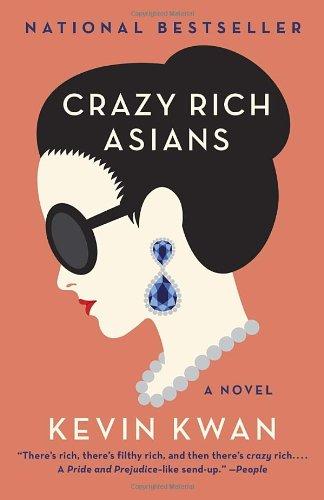 In an over-the-top, modern-day romance comedy of manners, Kevin Kwan brilliantly captures a world of unimaginable wealth and unrestrained consumption.

Nick Young, born in Singapore, and Rachel Chu, his Chinese American girlfriend, are academics contentedly living in New York City. When Nick invites Rachel to go home with him for the wedding of his best friend, she looks forward to the adventure and to taking their relationship to a new level. She doesn’t know, however, that her handsome boyfriend is the scion of one of Singapore’s richest families—and long-regarded as the most eligible bachelor in a close-knit network of upper-crust families.

In an over-the-top, modern-day romance comedy of manners, Kevin Kwan brilliantly captures a world of unimaginable wealth and unrestrained consumption.

Nick Young, born in Singapore, and Rachel Chu, his Chinese American girlfriend, are academics contentedly living in New York City. When Nick invites Rachel to go home with him for the wedding of his best friend, she looks forward to the adventure and to taking their relationship to a new level. She doesn’t know, however, that her handsome boyfriend is the scion of one of Singapore’s richest families—and long-regarded as the most eligible bachelor in a close-knit network of upper-crust families. From his haughty, suspicious mother to embittered ex-girlfriends and wanna-be-wives, to cousins and friends obsessed with the latest fashions and their lavish homes, Rachel finds herself facing challenges and intrigues beyond her wildest imaginings.

Kwan, who grew up among the Singaporean elite, brings a unique sensibility and sharp satirical eye to a delightful and revealing insider’s view of the cultural and social implications of the rise of Asian wealth.

Kevin Kwan was born and raised in Singapore. He currently lives in Manhattan. Crazy Rich Asians is his first novel.

“It’s impossible not to get sucked into this satirical novel about the jet-setting lives of an enormous busybody family and its infinite Louboutin collection.” —Glamour

Compare how Nick’s mother (p. 21–28, p. 56) and Rachel’s mother (p. 31–34, p. 68) react to hearing about their trip to Singapore. What do their reactions reveal about each of them as mothers? What qualities, if any, do they share? What is the significance of the “Chinese Way” (p. 68) in the mothers’ approach to courtship and marriage? Compare this with Rachel and Sophie’s conversation about marriage later in the book (pp. 278–79).

Does Nick’s description—“It’s like any big family. I have loudmouthed uncles, eccentric aunts, obnoxious cousins, the whole nine yards” (p. 67)—match the way most of us view our own families? Why doesn’t he tell Rachel more about the background and status of his family before their trip?

What does Rachel’s view of Asian men reveal about the complications of growing up Asian in America (p. 90)? How does Kwan use humor to make a serious point here and in other parts of the novel?

Discuss the role of gossip in the novel. What kinds of rumors do Nick’s friends and family spread about Rachel, and why? How do misunderstandings and misinformation (intentional or not) propel the plot and help define the characters? Consider, for example, the conversations at the Bible study class Eleanor attends (p. 108–109) and the chatter of the guests at Araminta’s bachelorette party (pp. 262–70).

Do you see the events surround Colin’s wedding and the ceremony itself as brazen, even crude displays of wealth or are there aspects of the celebrations that are appealing (pp. 393–416)? How do they compare to society or celebrity weddings you have read about?

What sort of future do you imagine for Nick and Rachel? Is it possible for Rachel to fit into a world “so different from anything [she’s] used to” (p. 431)? Does Nick fully understand the reasons for her doubts and unhappiness? What supports your point of view?

Why does the author devote different sections of the novel to specific characters? What effect does this have on your impressions of and sympathies for the problems and prejudices that motivate each of them?

What do the marriages of Eleanor and Philip, Astrid and Michael, and Eddie and Fiona show about what makes a marriage work and what can undermine even the best-intentioned husbands and wives?

F. Scott Fitzgerald famously said, “The rich are different from you and me.” In what ways are the characters in Crazy Rich Asians different from you and the people you know? Do they reflect the values of the particular communities Kwan explores or do they represent the ways of rich people everywhere? How do the divisions between economic and social status manifest themselves in American society?

The novel makes a clear distinction between old money (the Youngs and their extended family) and new money (Peik Lin’s family, for example), as well as between Mainland and Overseas Chinese. What differences do you see between these groups and the way they deal with their wealth? How does this shape their perceptions of themselves and one another?

Crazy Rich Asians is a story of the extremes of conspicuous wealth and consumption. Which scenes and settings in the novel best capture this excess? What do the many references to well-known luxury brands and exotic, expensive settings contribute to your sense of the time, place, and worldview of the characters?

Nick’s family has enjoyed wealth and privilege over several generations. Discuss the impact of their position on each generation, from the imperious Eleanor to the status-consumed Eddie to Astrid, the It girl of Asian society, to Nick. Despite their very different approaches to life, what rules or traditions influence their behavior and interactions? What elements from his past does Nick retain, despite his new life in America?

What role does the legacy of European imperialism play in the older generation’s tastes and style? How is the younger generation affected by their travels abroad and exposure to modern-day Western society? What insights does Rachel and Nick’s conversation with Su Yi give into the melding and clashing of European and Chinese cultures over the course of time (pp. 335–38)?

In addition to straightforward explanations of Chinese words, what function do the footnotes serve? In what ways do they help the author to fill out the narrative or comment on the context and content of his story? Look, for instance, at the notes on pages 141, 180, 219, and 263.

Behind its satirical tone and intent, what does the novel suggest about the ethical and emotional implications of the behavior that the characters indulge in? Does it make you think about some of your own actions or decisions?

What did you know about the financial boom in contemporary Asia before you read the novel? Were you surprised by manifestations of wealth depicted in the book? Peik Lin’s father says, “[T]his so-called ‘prosperity’ is going to be the downfall of Asia. Each new generation becomes lazier than the next…. Nothing lasts forever, and when this boom ends, these youngsters won’t know what hit them” (p. 303). To what extent are his insights accurate, not only in regard to the situation in Asia today but also to economic patterns across history?

Kevin Kwan has said that his novel follows an age-old literary tradition (Wall Street Journal, July 11, 2013). He points to Jane Austen writing about the “manor-house set,” Edith Wharton’s tales of America’s gilded age at the turn of the century, and F. Scott Fitzgerald’s chronicles of New York in the roaring ’20s. If you have read these books—or other novels about the manners and mores of the past—discuss the echoes and parallels you find in Crazy Rich Asians.