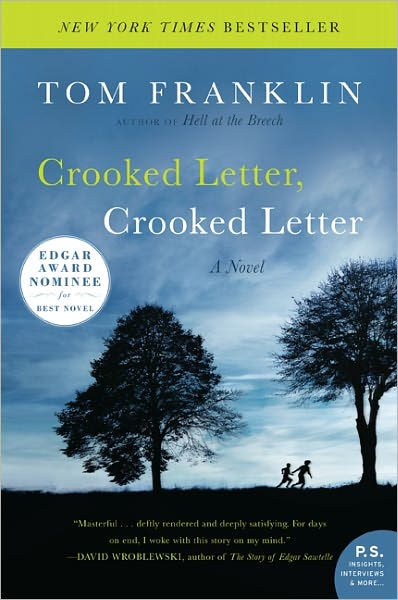 Tom Franklin’s extraordinary talent has been hailed by the leading lights of contemporary literature—Phillip Roth, Richard Ford, Lee Smith, and Dennis Lehane. Reviewers have called his fiction “ingenious” (USA Today) and “compulsively readable” (Memphis Commercial Appeal). His narrative power and flair for characterization have been compared to the likes of Harper Lee, Flannery O’Connor, Elmore Leonard, and Cormac McCarthy.

Now the Edgar Award-winning author returns with his most accomplished and resonant novel so far—an atmospheric drama set in rural Mississippi. In the late 1970s, Larry Ott and Silas “32”

Tom Franklin’s extraordinary talent has been hailed by the leading lights of contemporary literature—Phillip Roth, Richard Ford, Lee Smith, and Dennis Lehane. Reviewers have called his fiction “ingenious” (USA Today) and “compulsively readable” (Memphis Commercial Appeal). His narrative power and flair for characterization have been compared to the likes of Harper Lee, Flannery O’Connor, Elmore Leonard, and Cormac McCarthy.

Now the Edgar Award-winning author returns with his most accomplished and resonant novel so far—an atmospheric drama set in rural Mississippi. In the late 1970s, Larry Ott and Silas “32” Jones were boyhood pals, Larry the child of white, lower middle-class parents and Silas the son of a poor, single black mother. Their worlds were as different as night and day, yet, for a few months, the boys stepped outside of their circumstance and shared a special bond. But then tragedy struck: on a date, Larry took a girl to a drive-in movie, and she was never heard from again. She was never found and there was no confession, but all eyes rested on Larry. The incident shook the county—and perhaps Silas most of all. He and Larry’s friendship was broken, and then Silas left.

Over twenty years have passed. Larry, a mechanic, lives a solitary existence, never able to rise above the whispers of suspicion. Silas has returned to town as a constable. He and Larry have no reason to cross paths until another girl disappears and Larry is blamed, again. And now, two men who once called each other friend are forced to confront the past they’ve buried and ignored for decades.

Tom Franklin is the author of Poachers: Stories, Hell at the Breech, and Smonk. Winner of a 2001 Guggenheim Fellowship, he teaches in the University of Mississippi’s MFA program and lives in Oxford, Mississippi, with his wife, the poet Beth Ann Fennelly, and their children.

“It’s the perfect blend of great writing and really great suspense. It’s my favorite combo of things in a book. There are lots of twists and turns and surprises.”—John Searles on Weekend
TODAY (NBC)

“Though not in essence a mystery or a thriller, Crooked Letter, Crooked Letter possesses surprising twists and turns as Franklin reveals more background and history slowly, almost quietly. It’s a beautifully written, haunting and at times acutely painful story about race, class and friendship set in a rural Southern town built on the memories of crimes and other abuses of past generations.”—Associated Press

“There is no greater joy than when an author whom you’ve long admired produces his or her best work to date. . . . I’m back in that state of wondrous reading pleasure thanks to a new, years-in-the-making novel by Tom Franklin.”—Los Angeles Times

“The incantatory title of Tom Franklin’s terrific new novel comes from the way children in the South are taught to spell Mississippi: ‘M-I crooked letter crooked letter I crooked letter crooked letter I humpback humpback I.’ But letters aren’t the only thing twisted in the rural town of Chabot, Miss., where this story of long-delayed repercussions and revelations takes place. Franklin, an Edgar-winning writer of atmospheric tales, deserves an audience to match the praise he’s attracted for Poachers, Hell at the Breech, and Smonk. If you’re looking for a smart, thoughtful novel that sinks deep into a Southern hamlet of the American psyche, Crooked Letter, Crooked Letter is your next book.”—Washington Post

The epigraph reveals the origins of the novel’s title. Why do you think Tom Franklin chose to use “Crooked Letter, Crooked Letter“? What significance does it hold for the story?

Describe the boys Larry and Silas were, and the men they became. What drew Larry and Silas together as children? What separated them? How did you feel about both characters?

What elements of Larry’s life set him apart from others? Could he have done anything to change people’s opinion of him? Would you call Larry a “loser’? What about Silas?

When Larry is shot at the beginning of the novel, he is sympathetic to his attacker. “Larry felt forgiveness for him because all monsters were misunderstood.” Does Larry consider himself to be a monster? Why? Why isn’t he bitter? Could you be as charitable if you were in his place? Why does he say all monsters are misunderstood? Do you think he feels the same way at the end of the novel?

During the attack, the shooter is wearing an old monster mask that Larry recognized. What did that mask symbolize for both the victim and his attacker?

Tom Franklin goes back and forth between past and present to tell his story. How are Larry and Silas prisoners of their childhoods? How can we break the past’s hold on us?

Describe Larry’s relationship with his father, Carl. How might things have been different if Larry knew the truth about his family sooner? Why did Carl force Larry and Silas to fight as boys? What impact did that fight have on their friendship? Do you think the outcome was Carl’s intent? How did Silas feel about Carl?

Talk about both boys’ relationships to their mothers. How did their mothers shape them? Were they good sons? What kind of people were their mothers? Why does Silas go to see Larry’s mother in the nursing home?

When Silas visits Mrs. Ott, he’s reminded of the past when he first arrived in the town with his mother, both of them coatless in the cold. “Sometimes he thought how Larry’s mother had given them coats but not a ride in her car. How what seemed liked kindness could be the opposite.” How was this behavior cruel? Can you think of other examples from the book where kindness and cruelty were combined?

Was Larry treated fairly by the community or the law? We’re supposed to be a nation of laws in which people are innocent until proven guilty.

Why did Silas remain silent when he could have helped Larry when they were teenagers? Why does he finally come forward with the truth? How might both their lives have been different if the truth were known?

When he was a little boy, Larry’s mother used to pray for God to send him a special friend, “one just for him.” Were her prayers answered?

After Silas, Larry considered Wallace Stringfellow to be his friend. What was the bond between Larry and Wallace? What attracted one to the other? Were they really friends? What is a friend?

As an adult, Larry also prayed to God. “Please forgive my sins, and send me some business. Give Momma a good day tomorrow or take her if it’s time. And help Wallace, God. Please.” What were Larry’s sins? Why did he pray for Wallace? What did Larry see in Wallace?

When Larry is in the hospital after the shooting, Silas goes to visit. “He wondered how broken Larry was by the events of his life, how damaged.” How would you answer Silas?

Was Larry broken? Was he damaged? What kept him from becoming the monster everyone believed he was? Silas, too, wonders about himself. “What’s missing out of you Silas?” Does he discover his missing self? How? Is Silas a better man for the knowledge? How does that insight affect Larry’s life?

How does Larry react when Silas tells him the truth about their childhood? Can true friends overcome betrayal? How? Do you think they will be part of each other’s lives going forward?

Silas left Southern Mississippi then returned. Larry never left. Why did they make the decisions they did? What was it about their small town that drew and kept them there? How does place shape the novel? Could this have happened in any small town?

How is racism a part of the story? Use Larry and Silas’s experiences to support you response?

Crooked Letter, Crooked Letter is also a coming of age story. How did the characters come into themselves as the story progressed? What possibilities might the future hold for Larry and Silas?

At the novel’s end, Tom Franklin writes, “the land had a way of covering the wrongs of people.” What does he mean by this?