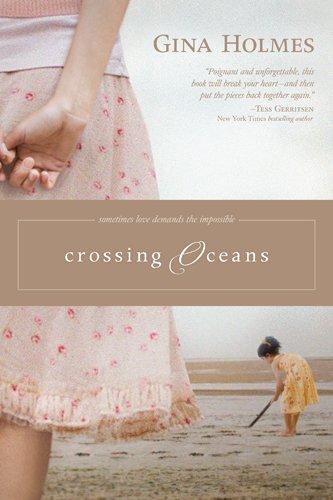 Jenny Lucas swore she’d never go home again. But being told you’re dying has a way of changing things. Years after she left, she and her five-year-old daughter, Isabella, must return to her sleepy North Carolina town to face the ghosts she left behind. They welcome her in the form of her oxygen tank–toting grandmother, her stoic and distant father, and David, Isabella’s dad . . . who doesn’t yet know he has a daughter. As Jenny navigates the rough and unknown waters of her new reality, the unforgettable story that unfolds is a testament to the power of love and its ability to change everything—to heal old hurts,

Jenny Lucas swore she’d never go home again. But being told you’re dying has a way of changing things. Years after she left, she and her five-year-old daughter, Isabella, must return to her sleepy North Carolina town to face the ghosts she left behind. They welcome her in the form of her oxygen tank–toting grandmother, her stoic and distant father, and David, Isabella’s dad . . . who doesn’t yet know he has a daughter. As Jenny navigates the rough and unknown waters of her new reality, the unforgettable story that unfolds is a testament to the power of love and its ability to change everything—to heal old hurts, bring new beginnings . . . even overcome the impossible. A stunning debut about love and loss from a talented new voice.

Gina Holmes began her career in 1998, penning articles and short stories. In 2005 she founded the influential literary blog, Novel Journey. She holds degrees in science and nursing and currently resides with her husband and children in southern Virginia.

“…There can be no happy ending, but Holmes ties a neat bow of acceptance around this haunting tale that packs an emotional wallop. Keep tissues near.”—Publishers Weekly

At the beginning of the book, everyone in Jenny’s family is hurting—Jenny, her dad, her grandmother. What are some of the things that have happened to bring them to this state? In what ways have they brought about their own suffering or made it worse than it had to be?

How does Jenny’s return home change the family dynamics? She didn’t really want to go home, but she felt she had no other options. Do you agree? What would you have done in her situation?

Was Jenny right to keep Isabella’s existence a secret from David? How might things have been different if David had known about Isabella from the beginning?

At one point, Jenny makes a snide remark to her father and then wonders, “Why was I waving a red cape before this bull instead of the white flag I’d intended?” Why is it so hard to break long-standing relational habits, even when we realize they are hurting us or someone we love? Have you faced a similar situation with a family member or a close friend? How did you handle it, or how do you wish you had handled it?

Jenny’s father has held Dr. Preston responsible for his wife’s death for several years. Is his anger justified? Have you or someone in your family experienced something similar to this? How did you or they respond?

While standing in David’s yard preparing to tell him about Isabella, Jenny puts her hand out to catch the flowers fluttering to the ground. Not one lands on her open palm. Instead they land on David. What do you think the author might have been trying to symbolize with this passage?

After Jenny tells her father she is dying, she reflects, “If anyone had been watching us, they’d have seen the tears spilling over my cheeks as a natural reaction to my father’s grief. There were tears of pain, yes, but as horrible as it may sound, there were tears of joy too. For the first time in my life I knew—really knew—that my father loved me.” Why is Jenny unconvinced before this of her father’s love? Is there someone you love who, like Jenny, might not be aware of your love? What might you do to change that perception?

Despite her father’s desperation, Jenny makes the difficult decision not to seek treatment for her cancer. Do you think that was the right thing for her to do? What factored into her decision? Have you ever known anyone who had to make a similar decision?

Do you think the loss of Jenny’s mother made Jenny’s diagnosis easier or more difficult for Jenny to handle? for her father to handle?

When David comes to pick up Isabella, he stops in the driveway and honks as he used to when he and Jenny were dating. Jenny tells us, “For the first time, I understood why the gesture used to infuriate my father.” What are some things you see differently as a parent, or simply as an adult, than you did as a child?

Describe the way Jenny’s feelings for David change throughout the story. Do you think she was ever really in love with him?

If you were in Lindsey’s position, how would you have reacted to Jenny’s return? What would have been the most difficult thing for you to come to terms with?

Craig is a true friend to Jenny and wishes to be more. Do you think he was right to ask Jenny to marry him? Should she have said yes even sooner than she did, or was she right to put him off?

Jenny’s mother’s epitaph is a far cry from that of the woman who lost four children. In what ways do you suppose these differing views manifested themselves in each woman’s life? Have you ever considered what you’d want your epitaph to say?

Have you ever had to communicate something life-altering to a child Isabella’s age? What did you find was the best way to do that?

Jenny ultimately decides to move in with David and Lindsey, against her own wishes, because she sees it as a chance to be a hero to her little girl. Was she right? Would you have made the same decision? Why or why not? What are some of the things to consider when weighing our own needs and desires against those of the people we love, especially those who are dependent on us?

Jenny is predisposed to dislike Lindsey because of her jealousy. At what point in the story does Jenny’s impression of Lindsey begin to change? What causes the change? What relationships do you have in which your initial impression of someone gradually changed for the better? Why did it change? Do you have any relationships in which you are letting jealousy or other negative feelings prevent you from seeing the person’s true worth?

Jenny seems to have a peace about dying. Would you have the same peace? Why or why not?

Jenny has an advantage over most in that she has time to spiritually prepare for her impending death. How would you minister to someone in the same situation?

If you knew you had only a few months to live, what would you most want to accomplish?