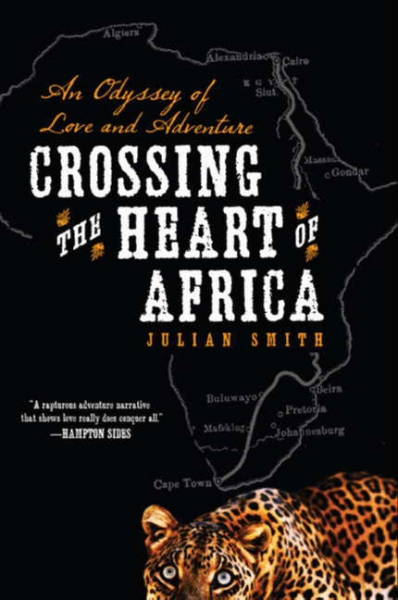 CROSSING THE HEART OF AFRICA

An Odyssey of Love and Adventure

In 1898, the dashing British adventurer Ewart “The Leopard” Grogan was head-over-heels in love—but he needed the approval of his beloved’s skeptical, aristocratic stepfather. To prove his worth, the 24-year-old Cambridge dropout set out on an epic quest to become the first person to walk the length of Africa, “a feat hitherto thought by many explorers to be impossible” (New York Times).

A little over a century later, journalist Julian Smith also found himself madly in love with his girlfriend of seven years…but terrified by the prospect of a lifelong commitment. Inspired by Grogan’s story,

In 1898, the dashing British adventurer Ewart “The Leopard” Grogan was head-over-heels in love—but he needed the approval of his beloved’s skeptical, aristocratic stepfather. To prove his worth, the 24-year-old Cambridge dropout set out on an epic quest to become the first person to walk the length of Africa, “a feat hitherto thought by many explorers to be impossible” (New York Times).

A little over a century later, journalist Julian Smith also found himself madly in love with his girlfriend of seven years…but terrified by the prospect of a lifelong commitment. Inspired by Grogan’s story, Julian decided to face his fears of marriage by retracing the explorer’s amazing—but now forgotten—4,500-mile journey for love and glory through the lakes, volcanoes, savannas, and crowded modern cities of Africa.

Crossing the Heart of Africa is the unforgettable account of twin adventures, as Julian beautifully interweaves his own contemporary journey with Grogan’s larger-than-life tale of charging elephants, cannibal attacks, deadly jungles, and romantic triumph.

Julian Smith is an award-winning travel writer whose work has appeared in Outside, National Geographic Adventure, National Geographic Traveler, Smithsonian, Wired, the Washington Post, and the Los Angeles Times, among other publications. He is the author of guidebooks to El Salvador, Ecuador, Virginia, and the southwestern United States, and he has been honored by the Society of American Travel Writers for writing the best guidebook of the year. He lives with his wife and daughter in Portland, Oregon.

“In this rapturous adventure narrative, Julian Smith follows in the footsteps of Ewart Grogan, one of history’s hard-core romantics, and shows that love really does conquer all. In this case, it crosses continents, endures tropical illnesses, braves every hardship—and inspires a cracking good yarn about the jittery joys of going solo before saying ‘I do.'”—Hampton Sides, New York Times–bestselling author of Blood and Thunder, Ghost Soldiers, and Hellhound On His Trail

“In Crossing the Heart of Africa, Julian Smith deftly weaves two stories of love and adventure, his own and that of Ewart Grogan, a 25-year-old Cambridge dropout who dodged cannibals and puff adders on an epic turn-of-the-century trek aimed at wooing his high-born love, Gertrude. As Smith, a reluctant romantic, chases gorillas and Grogan’s ghost across sub-Saharan Africa, also earning worthiness for a love waiting at home, he banishes his demons and spins a charming, wise, and captivating tale.”
—Dean King, bestselling author of Skeletons on the Zahara

“Though the golden age of exploration is long past, and the blank spots on maps are filled in, Julian Smith’s Crossing the Heart of Africa demonstrates a basic truth about the best travel writers: they arrive at the most interesting and worthwhile destinations when they look not only out at the scenery, but inward as well. His trek across Africa, in the footsteps of Victorian ubermensch Ewart Grogan took grit and persistence. But his journey toward unraveling the mysteries of his own heart required real courage. You’ll be glad to have traveled in his company.”—David Oliver Relin, New York Times bestselling co-author of Three Cups of Tea

“Like David Grann’s best-selling The Lost City of Z, this is two stories, of an explorer and of the author’s search for him, and both are compelling. Recommended for anyone who has ever been or wants to go on a quest.”—Library Journal

Much of the book is a meditation on being a lone outsider in places and cultures that are unfamiliar, at times almost alien. Discuss your own experiences in foreign places and cultures—unexpected things you encountered, intriguing people you met, ways you coped with being a stranger in a strange land.

The author writes that “Africa has always been a concept as much as a place” to the outside world. Discuss this idea. Why do you think it holds such a strong grip on the imagination? What are some of the most common clichés and stereotypes? Did the book change your views of this part of the continent or the people who live there today?

The author paints a “warts and all” portrait of Grogan, showing him as a gifted, confident hero but also an obstinate, impatient person who can wound and offend those close to him. Discuss your impression of him—was it more positive or negative? Did it change over the course of the book and his life? Is Grogan someone you’d like to meet, or have as a friend or business associate?

Before leaving for his trip, Smith says he loves his fiancée Laura and knows she is “The One,” but is still afraid of making a lifetime commitment. Is this inherently contradictory, a kind of emotional oxymoron? Why do you think some men hesitate in the face of marriage? Are they more likely to than women are?

Both Grogan’s and the author’s motivations for traveling through Africa seem simple on the surface—the love of a woman—but on closer inspection are really much more complex. How do you think their deeper motivations are alike, and how are they different? Are the romantic explanations disingenuous?

Consider the quote by John Steinbeck that opens part three: “A journey is like marriage. The certain way to be wrong is to think you control it.” Do you agree with this? Why or why not? How is taking a long trip like being in a long-term relationship, or not?

The portrait of Smith’s relationship with his fiancée is obviously only one side of the story. How different do you think things looked from Laura’s perspective? What is your impression of her character and the choices she made during over course of their relationship?

One of the lowest points in Grogan’s journey was when his partner Harry Sharp decided to leave and go home to London. Do you think, in the long run, this was actually for the best? Is someone like Grogan really better off on his own? Have you ever felt unexpectedly deserted like this—and how did things eventually turn out?

The book contrasts many of the same places in Africa seen a century apart. What are the major ways the continent seems to have changed since Grogan passed through, and what are the major similarities? Were any of these particularly surprising to you?

Grogan didn’t pursue lifelong fame after his journey, though he could have, instead moving to Africa with Gertrude and dying more or less in obscurity. Was this a surprise, and why do you think he chose this quieter path? Discuss the costs and benefits, compared to a life in the spotlight, from both his perspective and yours.

Grogan’s attitudes and actions toward both animals and Africans were complex and, at least by modern standards, often appalling. Discuss how his thinking changed over the course of his life, and how it affected your opinion of his character. Is calling him “a product of his times” any excuse for his worst behavior?

In the epilogue, Smith writes that “it makes me a little sad to sense our old freedoms fading” after the birth of their daughter, but also how “new opportunities have replaced old ones, and the list is even longer now.” If you have children, what do you think of these statements? Did you feel like becoming a parent, in a way, meant exchanging of old freedoms for new opportunities? If so, was this a difficult adjustment—and was is worth it?