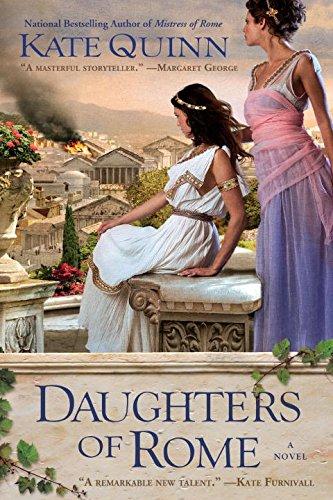 A.D. 69. Nero is dead. The Roman Empire is up for the taking. With bloodshed spilling out of the palace and on to the streets, chaos has become a way of life for Rome. The Year of Four Emperors will change everything—especially the lives of one family with a very personal stake in the outcome. Cornelia embodies the essence of the proper Roman wife. She patiently waits to one day see her loyal husband as Emperor of Rome, but instead witnesses his brutal demise at the hands of the Praetorian guard. Her sister Marcella is content merely to watch the politics and turmoil,

A.D. 69. Nero is dead. The Roman Empire is up for the taking. With bloodshed spilling out of the palace and on to the streets, chaos has become a way of life for Rome. The Year of Four Emperors will change everything—especially the lives of one family with a very personal stake in the outcome. Cornelia embodies the essence of the proper Roman wife. She patiently waits to one day see her loyal husband as Emperor of Rome, but instead witnesses his brutal demise at the hands of the Praetorian guard. Her sister Marcella is content merely to watch the politics and turmoil, until she discovers she has more of a penchant for shaping history then for writing about it. And while their cousins Lollia and Diana are both beautiful girls, they each come to find that beauty and wealth cannot quell the desires of the heart.

But when a bloody coup turns their world upside-down, each of these women must maneuver carefully just to stay alive. As Cornelia tries to pick up the pieces of her shattered dreams, Marcella discovers a hidden talent for influencing the most powerful men in Rome. In the end, though, there can only be one Emperor…and one Empress.

Kate Quinn and her husband live in San Diego, and her interests include opera, action movies, cooking, and the Boston Red Sox.

“Kate Quinn is a masterful storyteller…It is no mean feat to write a novel that is both literary and a page-turner.”—Margaret George, bestselling author of Helen of Troy and The Memoirs of Cleopatra

“Kate Quinn is a mistress of storytelling . . . She skillfully intertwines the private lives of her characters with huge and shocking events . . . Quinn is a remarkable new talent.”—Kate Furnivall, bestselling author of The Russian Concubine and The Jewel of St. Petersburg

"A riveting tale…glamorous and brutal, a heady mix of intrigue and combat, with added decadence and depravity…An exhilarating read."—Marie Claire, UK

"Fans of Philippa Gregory’s books who have had enough of Elizabethan times will be entranced by this Rome-set debut….Awash with historical detail, this is a violent, passionate, compelling read."—Elle Magazine, UK

In the opening prophecy Nessus has a vision of the future: “Clear as day he saw widowhood for three of the four girls; a fair amount of misery for one and fame for another; a total of eleven husbands and eight children between them—and of course, that one little hand spilling over with blood” (p. 4). Discuss the foreshadowing in this event. Which Cornelia did you think the bloodied hand belonged to? Which girl do you think saw misery and which one saw fame?

What are your first impressions of Lollia? At the beginning of the novel she gets into a heated argument with Cornelia because she buys a body slave from the market. But when there is a massive flood in the city, she is giving out money and food to the refugees and thinking: “I might like my parties and pleasures when times are good, but at least I know how to roll up my sleeves when necessary” (p. 133). What do you think this says about her character? Do you think Lollia changes at all throughout the novel? If so, how?

The relationship between Lollia and her grandfather is a complicated one. He often uses his granddaughter to acquire a better position in society through her various marriages—depending on who is favorable at the time. How do you think Lollia feels about this? Do you think that this is one of the reasons she bought Thrax, her body slave?

After he is released from prison, Marcella has a conversation with Marcus Norbanus, in which he tells Marcella the following: “I’ve always liked you, Marcella—you’re an intelligent woman, after all, and I like intelligent women. But I find I don’t like you anymore, and I don’t precisely know why. Perhaps it’s just my feeling that you’re a schemer” (p. 328). Why do you think he perceives her in this way? Do you think that his perceptions of Marcella are correct?

Discuss the changes in Cornelia throughout the novel. She begins the year of Four Emperors expecting to be named the wife to the future Emperor of Rome, but ends up widowed and without the security she had become accustomed to. How do you think her husband’s death changed her? Do you think she still would have ended up with Drusus if she had not been widowed?

Throughout the book the youngest cousin, Diana, seems to be obsessed with nothing but horses, yet at the end of the novel it becomes apparent that she has been paying much closer attention to her cousins’ activities than anyone thought. What are your observations about Diana? What do you think she picked up on that the other girls overlooked? And why do you think she keeps her perceptions to herself until the end?

There were many strong men portrayed throughout this boo. From Lollia’s gentle slave, Thrax, to Cornelia’s caring guard Drusus, to Diana’s strong-willed and moody Llyn, and to Marcella’s opinionated and domineering Domitian. Describe their differences and similarities. How do the men in the novel shape each of the women? Do you think that Cornelia, Marcella, Lollia, and Diana would have faced different outcomes if they were not involved with these men?

At the end of the novel, Marcella walks through the streets of Rome as the Empress, just as she desired. What do you think her life is like? Do you feel sorry for her or do you think that she got what she deserved? Has there ever been something that you desired in life that—once you acquired it—was not as great as you thought it would be?