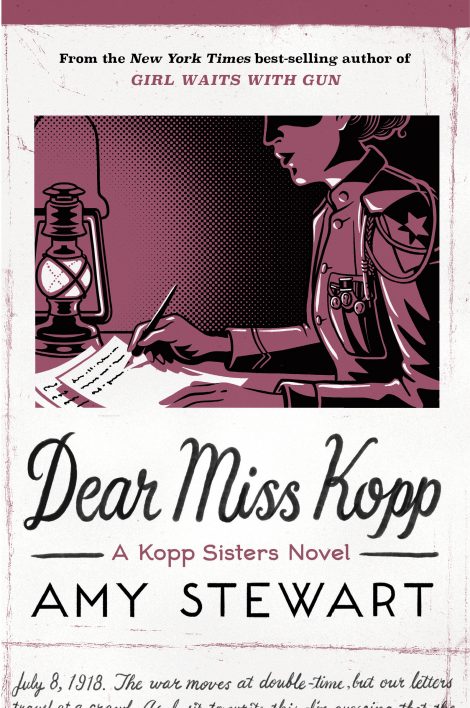 The U.S. has finally entered World War I and Constance is chasing down suspected German saboteurs and spies for the Bureau of Investigation while Fleurette is traveling across the country entertaining troops with song and dance. Meanwhile, at an undisclosed location in France, Norma is overseeing her thwarted pigeon project for the Army Signal Corps. When Aggie, a nurse at the American field hospital, is accused of stealing essential medical supplies, the intrepid Norma is on the case to find the true culprit.

The far-flung sisters—separated for the first time in their lives—correspond with news of their days.

The U.S. has finally entered World War I and Constance is chasing down suspected German saboteurs and spies for the Bureau of Investigation while Fleurette is traveling across the country entertaining troops with song and dance. Meanwhile, at an undisclosed location in France, Norma is overseeing her thwarted pigeon project for the Army Signal Corps. When Aggie, a nurse at the American field hospital, is accused of stealing essential medical supplies, the intrepid Norma is on the case to find the true culprit.

The far-flung sisters—separated for the first time in their lives—correspond with news of their days. The world has irrevocably changed—will the sisters be content to return to the New Jersey farm when the war is over?

Told through letters, Dear Miss Kopp weaves the stories of real life women into a rich fiction brimming with the historical detail and humor that are hallmarks of the series, proving once again that “any novel that features the Kopp Sisters is going to be a riotous, unforgettable adventure” (Bustle).

Amy Stewart is the New York Times best-selling author of the acclaimed Kopp Sisters series, which began with Girl Waits with Gun. Her six nonfiction books include The Drunken Botanist and Wicked Plants. She and her husband own a bookstore called Eureka Books. She lives in Portland, Oregon. For book club resources, Skype chats, and more, visit www.amystewart.com/bookclubs.

1. This is the first book in the Miss Kopp series written entirely in letter form. What did you think about this structure? What did you learn about the characters through their letters that you might not have learned through a traditional format?

2. The sisters are separated for the first time in their lives and must rely on written communication. Constance is able to write at length, while at first Norma struggles to communicate, relying on her new friend Aggie to help her compose her letters. How does their writing – their styles and what they choose to share – match their personalities?

3. What surprised you about the treatment women were subjected to because of their gender during the historical period of this book, both in the US and overseas?

4. Constance’s brother seems to have the hardest time of all the Kopp family members fitting into the world during the Great War. Did you sympathize with his situation?

5. In the previous Kopp Sisters books, Fleurette is extremely proud of her theatrical life and confident in her choices. But in this volume, she mentions that her contribution to the war effort – singing to the troops – is nowhere near as important as what Norma and Constance are accomplishing. How do you account for the change in her self-perception and her own value?

6. This is the first book where Norma solves a crime, without Constance to help. How do you think being separated caused the sisters to draw on one another’s strengths? How did they each embody the traits of the others?

7. The sisters all mention that they can’t imagine going back to the way they lived before the war. How have they been changed by the war? Why do they believe they might be discontent returning to their previous lives?

8. The ending provides a glimpse of the possibilities each Kopp sister has for her future. Are you surprised by the options available to them? What do you hope for them?

9. In the Historical Notes section at the end of the book, the author clarifies which parts of the lives of the Kopp sisters were historically known, and which she fictionalized due to a lack of information. Was the question of fact and fiction important to you while reading the novel? Does knowing this information afterward change how you think about the story?

You’re a terrible correspondent and there’s no excuse for it. Fleurette and I are left stateside while you march off to France. We had a few decent letters when you were in Paris and a passable selection when you arrived at your secret location, but lately you’re sending us nothing but an occasional “I am well” to let us know that you’re alive. Are words also being rationed overseas, even short ones?

I’m beginning to suspect that you wrote a year’s worth of brief, perfunctory letters already—​did you do them on the ship?—and now you simply select one to fit the circumstances.

It’s true, isn’t it? That sounds just like something you’d do. To wit:

Yours of a month ago read in its entirety: “All is well here and the meals are decent. Work continues apace.”

Two weeks ago we were treated to: “Health is good. Food ordinary but adequate. Work proceeds as expected.”

Yesterday the postman oughtn’t to have bothered, so light were his duties. “Am well. Expect the same for you.”

Really, Norma! Not even a mention of the decent, ordinary, adequate meals this time?

It’s bad enough that our letters take weeks or even months to reach each other. Can’t you put something in them that’s worth the wait?

For the better part of 1917, when you were still here in New Jersey, we were treated to almost daily dispatches from Fort Monmouth. You seemed to have no difficulty in recounting names, personalities, conversations, arguments (mostly there were arguments, as I recall, but somehow the Army decided to keep you anyway), and, if anything, excessively detailed descriptions of the military’s pigeon messenger program, its small triumphs and all too frequent setbacks. Why, then, is it so difficult to put down a line or two now that you’re working on the very same program in France?

Meanwhile, here I am in a boarding-house with twenty other women. A letter from overseas is an occasion: we all gather around the parlor in the evenings to read them aloud. Just last week, Kit in 3F had a letter from her brother about a French mutt his unit picked up. He even drew a picture of the dog. I’ve heard tales of dances with officers (not that I expect you to dance with an officer), pitiable descriptions of wounded men coming out of surgery and asking how many limbs remained, and accounts of air raids that would set your hair aflame.

Pages, Norma! Pages and pages they write. The soldiers, the nurses, the ambulance drivers—every one of them has something to say about the war, except you.

I know that your work with the carrier pigeons is of great importance and must be cloaked in secrecy. But once—​just once—give the censor something to do! Let him go to work on a four-pager. As it is, he hardly need hold your envelope up to the light to see that it contains nothing of interest to the Germans (or to your family, for that matter). He can probably tell by weighing it how little ink has been spilled.

We’ve never been apart in our lives, and there you are, half a world away. Couldn’t you paint a picture of the sort of place you’ve been sent, or give some general idea of the goings-on?

If nothing else, I hope you’ll take seriously my suggestion to keep a diary, and to make a record of anything that wouldn’t be allowed past the censors. I put three notebooks in your trunk when you left, and I’ll send you more if you like. I’m convinced that if you don’t write something down for us to read when you return, you’ll come home and say that you single-handedly won the war and there’s nothing else to tell. Well, there is quite a bit to tell, so get to it.

Constance (and Fleurette, if she were here, but she hardly ever is)

Dear Constance (and Fleurette, if she can be found),

I suppose you’re feeling puny down there in the parlor at night, when the others are reading their letters. I hate to think what sort of people you’re living among, but if a letter from France is all they have to prop themselves up, I suggest you let them cling to their small triumphs and get on with your own work, or have you run out of saboteurs to chase?

I’m in a village in France that I cannot name, doing work I’m not allowed to describe, with the aim of defeating the Germans, which you already knew. What more is there to say?

Food is nourishing, bed is clean and dry, the war goes on.