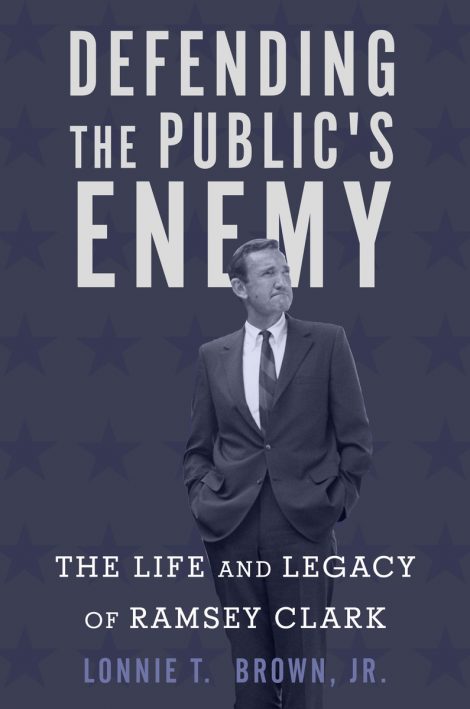 The Life and Legacy of Ramsey Clark

What led a former United States Attorney General to become one of the world’s most notorious defenders of the despised? Defending the Public’s Enemy examines Clark’s enigmatic life and career in a quest to answer this perplexing question.

The culmination of ten years of research and interviews, Lonnie T. Brown, Jr. explores how Clark evolved from our government’s chief lawyer to a strident advocate for some of America’s most vilified enemies. Clark’s early career was enmeshed with seminally important people and events of the 1960s: Martin Luther King, Jr., Watts Riots, Selma-to-Montgomery March, Black Panthers, Vietnam.

What led a former United States Attorney General to become one of the world’s most notorious defenders of the despised? Defending the Public’s Enemy examines Clark’s enigmatic life and career in a quest to answer this perplexing question.

The culmination of ten years of research and interviews, Lonnie T. Brown, Jr. explores how Clark evolved from our government’s chief lawyer to a strident advocate for some of America’s most vilified enemies. Clark’s early career was enmeshed with seminally important people and events of the 1960s: Martin Luther King, Jr., Watts Riots, Selma-to-Montgomery March, Black Panthers, Vietnam. As a government insider, he worked to secure the civil rights of black Americans, resisting persistent, racist calls for more law and order. However, upon entering the private sector, Clark seemingly changed, morphing into the government’s adversary by aligning with a mystifying array of demonized clients—among them, alleged terrorists, reputed Nazi war criminals, and brutal dictators, including Saddam Hussein.

Is Clark a man of character and integrity, committed to ensuring his government’s adherence to the ideals of justice and fairness, or is he a professional antagonist, anti-American and reflexively contrarian to the core? The provocative life chronicled in Defending the Public’s Enemy is emblematic of the contradictions at the heart of American political history, and society’s ambivalent relationship with dissenters and outliers, as well as those who defend them. 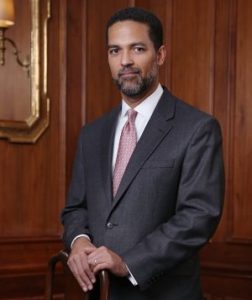 Lonnie T. Brown, Jr. is the A. Gus Cleveland Distinguished Chair of Legal Ethics and Professionalism at the University of Georgia School of Law. He specializes in legal ethics and civil procedure, and speaks and publishes widely in the area of legal ethics in the adversary process.

“Ramsey Clark is at once an important participant in the major events of the past 60-plus years of American and world history, particularly relating to civil and human rights, and a lawyer whose professional career is among the most interesting and impactful. Brown’s book is both a fascinating account of the man and lawyer and a captivating lens through which to see a connection among important events in contemporary history.” —Bruce Green, Fordham University School of Law

“In this captivating biography, Lonnie T. Brown offers an intimate window into Ramsey Clark’s controversial career as it intersected and shaped twentieth-century political and legal history, and challenges how we understand the role of lawyers in a democratic society.” —Anthony Romero, Executive Director, ACLU

“Evolving from one of the most accomplished public lawyers of his time to perhaps the most vilified, Ramsey Clark has been an important and controversial participant in nearly every important American public debate, from civil rights to the post-9/11 world. In this sympathetic, personal account, Lonnie T. Brown, Jr. strikes a balance between Clark’s defenders and his critics. Clark will continue to inspire passionate disagreement, but this is the best account we have of the career of this important public figure.” —Kenneth W. Mack, author of Representing the Race: The Creation of the Civil Rights Lawyer

“Lonnie T. Brown Jr.’s biography of the remarkable Ramsey Clark is careful, thorough, and insightful. It is an important contribution to the history of American lawyering.” —Randall Kennedy, Harvard Law School

“Ramsey Clark is an unsung hero of the civil rights movement. Through extensive interviews with Clark, Lonnie T. Brown, Jr. deepens the portrait of one of the most complex figures in twentieth-century American history. Spanning Clark’s career as a lawyer and public servant from the 1960’s civil rights and anti-war protests through the trial of Saddam Hussein, this fascinating book reveals a ‘sophisticated yet shadowy Forrest Gump’ indeed.” —W. Bradley Wendel, Cornell Law School

It was the morning of November 8, 2008, and I was about to have my first formal meeting with Ramsey Clark concerning this book. As I waited anxiously for him in the lobby of his aging Greenwich Village apartment building, I pondered what he would be like when we finally met face to face. Although I am somewhat reluctant to admit it, this was actually not my first encounter with him. We had been in each other’s company on two previous occasions, but both were memorably underwhelming.

In 1995, while interviewing for a teaching position at the University of Cincinnati College of Law, I was informed by my faculty host that in addition to a full day of interviews, I was also going to be treated to dinner and a lecture by none other than Ramsey Clark. Clearly, I was supposed to be impressed; however, I must embarrassingly disclose that I had no idea who he was. The name sounded familiar, but beyond that I had nothing. Everyone assumed that I knew the luminary with whom I had been invited to dine, and I was too self-conscious to tell them otherwise. They spoke of him as if he were some famous rock star or athlete, recognizable by a single name, like Elvis or Madonna or Prince. So, instead of outing my unhip ignorance, I clumsily feigned familiarity. A rather inauspicious beginning for his future biographer, huh? It gets worse, though.

The dinner was mind-numbing. I recall almost nothing about it except that I was seated at a circular table diagonally from Clark, he talked a lot, and the other dinner guests seemed totally engaged. I can’t remember any of the topics discussed or even what I ate. I vaguely recollect that I struggled at first to follow the discussion in an effort to piece together who he was, but I quickly gave up and just tuned out. If anything, I was resentful of Clark for upstaging and monopolizing what was supposed to be my interview dinner. I don’t think I spoke a single word besides placing my food and drink orders. To make matters worse, when we finished eating, I still had to sit through his lecture, which I found to be a rambling, sleep-inducing mess, literally. When I glanced over at my interview host, he was sound asleep—head back, mouth open. I figured, thankfully, this would be the first and last time that I would have to endure Ramsey Clark. I was wrong.

Our paths crossed again five years later at the University of Illinois College of Law during my second year there as an assistant professor. This time, I had a better idea of who he was, but only because I had taught a case in my civil procedure class in which he was sanctioned for having filed a frivolous lawsuit. The case was Saltany v. Reagan, as in President Ronald Reagan. Not surprisingly, Clark was not the president’s lawyer. I will have much more to say about this case later. It is an important part of the journey.

My enhanced familiarity with Ramsey Clark did little to make this encounter any more meaningful than my first. He again delivered a lecture to the law school community, and notwithstanding my best efforts to pay close attention, it was no use. He quickly lost me with another meandering wreck of a speech. The question-and-answer session that followed was even more frustrating. I vividly recall him taking a rather straightforward inquiry from a student and transforming it into an opportunity for a ten-minute soliloquy on something that had nothing whatsoever to do with the question posed. I have since learned that he has a habit of doing this, even in casual conversation. I think it is unintentional, but I’m not altogether sure. Sometimes after a long, seemingly irrelevant verbal detour, he wanders back to the subject and reveals the pertinence of what had appeared to have been a tangent. He may have done that at Illinois, but, at this juncture in our relationship, I had neither the interest nor the patience to stick with him.

After Clark’s lecture, there was a dinner in his honor, mercifully far less intimate than our previous one in Cincinnati—just about all of the faculty were in attendance. He said a few words to the gathering, and I do remember him being remarkably unassuming and gracious. I would not characterize him as overtly friendly, but he was definitely warm and genuine. I still did not understand why he seemed to be such a big deal to so many people, but this time I sensed something cool about him. My second meeting with Ramsey Clark created a bit of intrigue. Perhaps it would be worth learning more about him.

This was in 2000, and with each succeeding year, I dug deeper and deeper into his background, focusing principally on his tenure in the Department of Justice, but I also delved, at least superficially, into some of his controversial representations and causes. I began to notice that my students always got particularly energized when we covered Saltany v. Reagan. Then I realized that it was actually me who was energized. So maybe I was simply projecting my growing personal fascination with Lyndon Johnson’s former attorney general. I really wanted to know why someone who seemed to have been a pillar of the establishment would sue a sitting president. I was curious, but not to the point of wanting to pour myself into what seemed like a side project. I was an untenured assistant professor after all. I did not have time to pursue intellectual titillation.

My perspective changed in 2005 when Ramsey Clark provided me with the incentive I needed to make his journey mine. In that year, he volunteered to be a part of the team of lawyers defending former Iraqi president Saddam Hussein in his high-profile trial on war crime charges. As I had learned through my general research, Clark was not shy about taking on puzzlingly controversial clients, but Saddam Hussein? Why on earth would a former U.S. attorney general willingly side with a man who was the number one enemy of the nation that he had ably and courageously served throughout the 1960s? I had to find out.