THE DEPARTMENT OF RARE BOOKS AND SPECIAL COLLECTIONS

Anxious People meets the delights of bookish fiction in a stunning debut following a librarian whose quiet life is turned upside down when a priceless manuscript goes missing. Soon she has to ask: what holds more secrets in the library—the ancient books shelved in the stacks, or the people who preserve them?

Anxious People meets the delights of bookish fiction in a stunning debut following a librarian whose quiet life is turned upside down when a priceless manuscript goes missing. Soon she has to ask: what holds more secrets in the library—the ancient books shelved in the stacks, or the people who preserve them?

Liesl tries to sound the alarm and inform the police about the missing priceless book, but is told repeatedly to keep quiet, to keep the doors open and the donors happy. But then a librarian unexpectedly stops showing up to work. Liesl must investigate both disappearances, unspooling her colleagues’ pasts like the threads of a rare book binding as it becomes clear that someone in the department must be responsible for the theft. What Liesl discovers about the dusty manuscripts she has worked among for so long—and about the people who care for and revere them—shakes the very foundation on which she has built her life.

The Department of Rare Books and Special Collections is a sparkling book-club read about a woman struggling to step out from behind the shadows of powerful and unreliable men, and reveals the dark edge of obsession running through the most devoted bookworms. 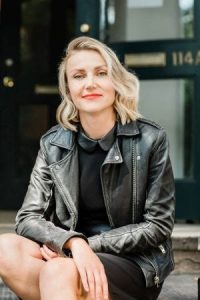 Eva Jurczyk is a writer and librarian living in Toronto. She has written for Jezebel, The Awl, The Rumpus and Publishers Weekly. The Department of Rare Books and Special Collections is her first novel.

“With its countless revelations about the dusty realms of rare books, a likable librarian sleuth who has just the right balance of compassion and wit, and a library setting that is teeming with secrets, The Department of Rare Books and Special Collections is a rare treat for readers. I loved this book!”—Matthew Sullivan, author of Midnight at the Bright Ideas Bookstore

1. What was your first impression of Liesl, as a leader, as a parent, as a woman? Did your opinion change throughout the book?

2. Everyone except Liesl is extremely reluctant to involve the police. What do they fear? What are the consequences of that fear?

3. Liesl often has to swallow her feelings to get along with her colleagues and family. Have you ever been in a situation where you felt like you couldn’t be honest about what you felt? What impact did that have? How does Liesl’s isolation affect her search for the Plantin?

4. The Peshawar facsimile at the book fair makes Liesl uncom- fortable. Do you think reproductions of rare books or art cheapen the original? What do you see as the difference between a facsimile and a forgery?

5. The characters at the library spend their days surrounded by priceless books. Was there a title in the library’s collection that especially moved you? Which of the books would you have stolen to keep for yourself?

6. Francis is a complicated character, especially from Liesl’s perspective. Were you rooting for him? Did you think he deserved Max’s suspicion? How did Liesl’s feelings about him shape your impression?

7. Liesl mentions having “never had more authority and less control in my life.” What’s the difference between authority and control? Have you ever been in a similar position?

8. One of the barriers that prevented Miriam from seeking treat- ment for her depression was the possibility of people calling her “crazy” for it. How has mental health stigma shifted throughout your life? Where is it most persistent?

9. Vivek ends the book carrying a lot of guilt for his inability to help Miriam. What do you think happens to Vivek after the end of the book?

10. Hannah points out that there’s a difference between putting your name forward for a promotion and doing your work well and hoping people will one day notice. Where do you fall on that scale? How do these competing theories shape the workforce, especially in how men and women are evaluated at work?

11. Of Detective Yuan’s list of noncommercial motivations for theft—revenge, thrill, passion—which did you think was most likely? Who did that make you suspect?

12. When the thief was revealed, what were your thoughts? How well do we know the people around us? Do we know more or less once they leave us for good?

13. Would you take the chief librarian position in Liesl’s place? Do you think her final decision was the right one?

What was the inspiration for The Department of Rare Books and Special Collections?

I’ve worked in libraries for a long time, so that had a lot to do with my decision to set the book in a library. But what I really wanted to explore was the character of a woman who was older than a traditional protagonist in fiction. I had just become a mother when I started writing the novel and I had heard older women in my life say that at some point as a woman, you just become invisible. I became obsessed with that idea—the way that women are seen, or not seen, through the different stages of their life.

How have your own experiences in libraries shaped this book?

When I was a graduate student I worked in a rare books library, and it was one of the coolest experiences of my life. The librarians had the most fascinating backstories (Soviet defection, love affairs with ballet dancers—and that’s just one woman’s out of the bunch), and they spent every day surrounded by treasure. Writing the book was a way to spend more time in that place, even if it was just in my imagination.

The final chapters of the book read almost like a love letter to libraries and books. How would you describe the role of an ideal library?

Isn’t every library an ideal library? When I was a kid, I spent half my life in my little community branch that was scarcely larger than a corner store, but they had dozens of Nancy Drew novels and back issues of Spin magazine. It was perfect. As an under- grad I would use a study carrel to nap between classes. It was perfect. When I lived overseas I would go to the British Museum on my lunch break and peer through the window at the papier- mâché ceiling of the great reading room where Oscar Wilde and Virginia Woolf used to do their work. Perfect. Now I take my son to the sort-of-smelly children’s section of our local branch in a 150-year-old former postal station and we sing our hearts out to “Baby Shark” with the children’s librarian. Perfect, perfect, perfect.

Speaking of past and future, the dating of the Peshawar manuscript is quite the controversy here. Which do you think is a greater responsibility, preservation or understanding?

The goal of preservation of cultural property is to aid in under- standing. But that understanding shouldn’t come at the expense of preservation. There’s a certain amount of hubris in that, isn’t there? In thinking that you are equipped to extract all of the meaning from a thing, that you have no responsibility to leave the thing for the people who come after you. In the case of Rhonda’s project to date the Peshawar, there was care and respect for preserving the Peshawar manuscript as her team sought to understand. I wouldn’t have let them do it without that care and respect!

What draws you to crime fiction as a writer? As a reader?

Plot, plot, plot, plot, plot. As a reader, I love the feeling of needing to turn the page. As a writer, committing and solving crimes gives my characters something interesting to do. If left to my own devices, I would write snappy conversations between characters in cool locations and nothing would ever happen.

More than one of your characters struggles with their mental health. Do you think the stigma attached to mental health is decreasing? Do you have any advice for people who are struggling?

I think little by little the stigma is decreasing. But I worry that while people now understand that mental illness is illness, not a character defect, they are still unsure about how to support the people in their lives who may be suffering from mental illness. So my advice is not for people who are struggling with depression or other mental health challenges, it’s for those who aren’t. My advice is to seek resources from your local health authority so that you can be a supportive partner, coworker, employer, or friend.

Which books are on your bedside table these days?

It’s a big pile! But if I push aside the overdue library books, there are a few that stand out. There’s Mort sur le Nil, a translation of Agatha Christie’s Death on the Nile that I’m using to practice my French. I’ll be able to say “She’s been shot!” before I can successfully order dessert en français. I’m also savoring Where the Wild Ladies Are by Matsuda Aoko. It’s a collection of short stories that are retellings of Japanese folk tales and ghost stories. They’re moody and spooky and feminist and surprising. Lastly, I just read Rumaan Alam’s Leave the World Behind in one sitting. At one point it stressed me out so much I threw it across the room. I’m keeping it close so I can eventually reread it.