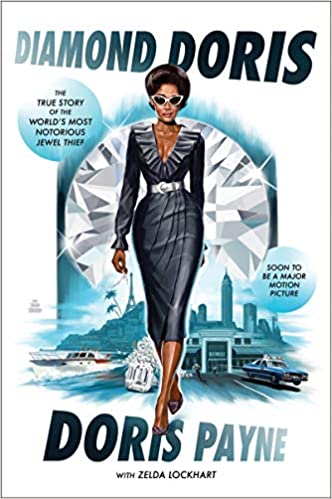 The True Story of the World's Most Notorious Jewel Thief

In the ebullient spirit of Ocean’s 8, The Heist, and Thelma & Louise, a sensational and entertaining memoir of the world’s most notorious jewel thief—a woman who defied society’s prejudices and norms to carve her own path, stealing from elite jewelers to live her dreams.

Growing up during the Depression in the segregated coal town of Slab Fork, West Virginia, Doris Payne was told her dreams were unattainable for poor black girls like her. Surrounded by people who sought to limit her potential, Doris vowed to turn the tables after the owner of a jewelry store threw her out when a white customer arrived.

In the ebullient spirit of Ocean’s 8, The Heist, and Thelma & Louise, a sensational and entertaining memoir of the world’s most notorious jewel thief—a woman who defied society’s prejudices and norms to carve her own path, stealing from elite jewelers to live her dreams.

Growing up during the Depression in the segregated coal town of Slab Fork, West Virginia, Doris Payne was told her dreams were unattainable for poor black girls like her. Surrounded by people who sought to limit her potential, Doris vowed to turn the tables after the owner of a jewelry store threw her out when a white customer arrived. Neither racism nor poverty would hold her back; she would get what she wanted and help her mother escape an abusive relationship.

Using her southern charm, quick wit, and fascination with magic as her tools, Payne began shoplifting small pieces of jewelry from local stores. Over the course of six decades, her talents grew with each heist. Becoming an expert world-class jewel thief, she daringly pulled off numerous diamond robberies and her Jewish boyfriend fenced the stolen gems to Hollywood celebrities.

Doris’s criminal exploits went unsolved well into the 1970s—partly because the stores did not want to admit that they were duped by a black woman. Eventually realizing Doris was using him, her boyfriend turned her in. She was arrested after stealing a diamond ring in Monte Carlo that was valued at more than half a million dollars. But even prison couldn’t contain this larger-than-life personality who cleverly used nuns as well as various ruses to help her break out. With her arrest in 2013 in San Diego, Doris’s fame skyrocketed when media coverage of her astonishing escapades exploded.

Today, at eighty-seven, Doris, as bold and vibrant as ever, lives in Atlanta, and is celebrated for her glamorous legacy. She sums up her adventurous career best: “It beat being a teacher or a maid.” A rip-roaringly fun and exciting story as captivating and audacious as Catch Me if You Can and Can You Ever Forgive Me?—Diamond Doris is the portrait of a captivating anti-hero who refused to be defined by the prejudices and mores of a hypocritical society.

Doris Payne was born in Slab Fork, West Virginia. She is the daughter of a coal miner and the youngest of six siblings. Her career as an international jewel thief spans 6 decades.

“Payne’s story has made her life irresistible.” -Atlanta Journal-Constitution

“Payne’s storytelling voice is easy and intimate. . . .You want to cheer for Payne. . . . She’s stolen yet another thing. Your heart.” -New York Times

“This astonishing memoir by a daring and prolific African American jewel thief reads like a thrilling caper novel, even as it reveals hard truths. . . . At the core of this incredible tale, a sassy catch me-if-you-can told from a Black female’s perspective, is a defiant and relentless woman who will do anything to go against what is dictated by her skin color and socioeconomic status.” -Booklist (starred review)

The highest-quality diamonds are colorless—they display an absence of color—while those of lower quality have some noticeable color. Diamond color is graded on a scale of D (colorless, a pure white) to Z (light, manifesting in a pale yellow), with the degrees of Near Colorless, Faint, and Very Light on the scale between D and Z. “Fancy-color” diamonds have greater color than a Z grade, with varying hues of yellow or brown. A D-color diamond is the highest grade and is extremely rare—the most expensive grading money can buy.

I WAS BORN RIGHT BETWEEN BIG BEAUTIFUL mountains and right between the world wars. My father was a coal miner when coal was the wealth of the nation. Black people, Native Americans, and all sorts of Europeans lived in the same town and worked together. The houses provided by the coal-mining company in Slab Fork, West Virginia, were nice. We had a four-bedroom home on Slab Fork Road, with a living and dining area, a kitchen with a pantry, and a bathroom with a tub and running water. We had two fireplaces and a kitchen stove to keep the house warm. It wasn’t like the image of flies landing on your nose while you sleep that people have now when they think about mining towns.

And there was a status to the women in Slab Fork. They were stylish, and kept their kids clean, and kept fine things like embroidered doilies. They got their style from Town & Country and Harper’s Bazaar magazines that arrived each month in the mail. My mom used these magazines to teach my big sister, Louise, and me how to carry yourself, how to set a table properly, how to let your household reflect international class and fine living.

Just like in any neighborhood that looks normal on the outside, things went on beneath the surface. The kids, of course, didn’t understand most of it. We just looked to the grown-ups as the people in our community who sheltered and protected us, but a lot of the women slept with each other’s husbands. Some women had a man and a husband, and they all knew each other and didn’t mind. My daddy wasn’t having none of that, though. My mother was a very attractive, refined Native American woman who had long hair down past her waist. She kept her hair braided and pinned up in two buns on either side of her head because my father didn’t let her wear her hair down except in the bedroom at night.

I didn’t know the word “abusive” then, but I knew my father was mean to my mother. One day, when I was about four years old, I was playing in the yard with Louise, who was keeping an eye on me. Mom used to put me on the porch swing or in the yard to play, and I could see her go all the way to Mr. Benjamin’s store and come back. Mr. Benjamin was a nice Jewish man who had come to Slab Fork and built a store that was in competition with the company store. The company store never had everything a Black customer needed, but Mr. Benjamin sold pigs’ feet, zoot suits, and all else in between.

That day Daddy got off the work truck and asked Louise, “Where is your mother?” She was only seven years old, but she was a big kid to me. She explained to Daddy, “Mom went to get some things from Mr. Benjamin’s store. She said she’d be right back.”

I quit playing with my little sticks and grass and went and sat by Louise because I could feel Daddy’s mood change. He looked like a statue, watching Mom come down the road past the other houses. When she got to the gate, he went over and, with his fist like a hammer, struck her on the head. I had never seen anything like that. I got a twist in my belly. I ran at my father and beat at his pant leg. He was such a large man. I was just a scrawny little “Dink,” as my father called me. He kept hitting her until she fell to the ground. I’ll never forget how helpless I felt. I looked at my mom and didn’t know if she was dead. It scared the shit out of me. It made me realize something: I needed to protect her. From then on, my plan was to stay by her side. I figured he wouldn’t hit her with his little Dink in the way.