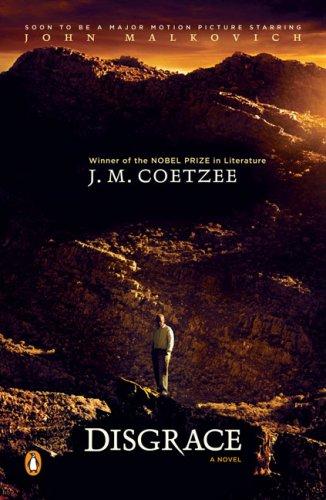 Disgrace—set in post–apartheid Cape Town and on a remote farm in the Eastern Cape—is deft, lean, quiet, and brutal. A heartbreaking novel about a man and his daughter, Disgrace is a portrait of the new South Africa that is ultimately about grace and love.
At fifty—two Professor David Lurie is divorced, filled with desire but lacking passion. An affair with one of his students leaves him jobless and friendless, except for his daughter, Lucy, who works her smallholding with her neighbor, Petrus, an African farmer now on the way to a modest prosperity. David’s attempts to relate to Lucy,

Disgrace—set in post–apartheid Cape Town and on a remote farm in the Eastern Cape—is deft, lean, quiet, and brutal. A heartbreaking novel about a man and his daughter, Disgrace is a portrait of the new South Africa that is ultimately about grace and love.
At fifty—two Professor David Lurie is divorced, filled with desire but lacking passion. An affair with one of his students leaves him jobless and friendless, except for his daughter, Lucy, who works her smallholding with her neighbor, Petrus, an African farmer now on the way to a modest prosperity. David’s attempts to relate to Lucy, and to a society with new racial complexities, are disrupted by an afternoon of violence that changes him and his daughter in ways he could never have foreseen. In this wry, visceral, yet strangely tender novel, Coetzee once again tells “truths [that] cut to the bone” (The New York Time Book Review).

J. M. Coetzee is the author of seven works of fiction and a memoir, all of which are available from Penguin. He has won numerous literary prizes, including the Booker Prize for Life & Times of Michael K and the Irish Times International Fiction Prize for The Master of Petersburg. In 1987, Coetzee was awarded the Jerusalem Prize, and in 1998 was the recipient of a Lannan Literary Award.

“A subtly brilliant commentary on the nature and balance of power in his homeland… by a writer at the top of his form.”—Time

“Disgrace is not a hard or obscure book—it is, among other things, compulsively readable—but what it may well be is an authentically spiritual document, a lament for the soul of a disgraced century.”—The New Yorker

“Mr. Coetzee, in prose lean yet simmering with feeling, has indeed

achieved a lasting work: a novel as haunting and powerful as Albert

The novel begins by telling us that “For a man his age, fifty-two, divorced, he has, to his mind, solved the problem of sex rather well.” What can you infer about David Lurie’s character from this sentence? In what ways is it significant, particularly in relation to the events that follow, that he views sex as a “problem” and that his “solution” depends upon a prostitute?

Lurie describes sexual intercourse with the prostitute Soraya as being like the copulation of snakes, “lengthy, absorbed, but rather abstract, rather dry, even at its hottest.” When he decides to seduce his student, Melanie, they are passing through the college gardens. After their affair has been discovered Melanie’s father says that he never thought he was sending his daughter into “a nest of vipers.” Lurie has also written a book about Faust and Mephistopheles and explicates for his class a poem by Byron about the fallen angel, Lucifer, whom Lurie describes as being “condemned to solitude.” What do you think Coetzee is trying to suggest through this confluence of details? How clearly does Lurie himself understand his behavior? How does his reading of the Byron poem prefigure his own fate?

When Lurie shows up unexpectedly at Melanie’s flat, “she is too surprised to resist the intruder who thrusts himself upon her.” Later, he tells himself that it was “not rape, not quite that, but undesired nevertheless, undesired to the core.” How do you view what happens in this scene? Is it rape?

How would you characterize Lurie’s attitude before the academic committee investigating the charges of harassment brought against him? Is the committee justified in asking for more than an admission of guilt? Why does Lurie refuse to assent to the fairly simple demands that would save his job? What consequences, practical and spiritual, follow from this refusal?

Lurie claims that in his relationship with Melanie, he was “a servant of Eros” and that his case rests on the rights of desire. On the God who makes even the small birds quiver.” Is this an acceptable explanation of his actions? Do you think it is sincere?

What parallels do you see between the attack on Lurie and his daughter Lucy and Lurie’s own treatment of Melanie and Melanie’s father? To what extent do you think Coetzee wants us to see Lucy’s rape as a punishment for Lurie’s undesired sexual encounter with Melanie? Is this an instance of the sins of the father being visited upon the child?

In the course of the attack, Lurie is burned and blinded, temporarily, in one eye. What symbolic value might attach to these events? In what other ways has Lurie been blind? What significance does fire have for him?

Why does Lucy refuse to report her rape? How is her decision related to the changed relations between blacks and whites in post-apartheid South Africa? Why does she accept Petrus’ protection even after he has been implicated in the attack?

How do you feel about Lucy’s neighbor Petrus? To what extent do you think he was involved in the attack? What are his motives? What are the motives of the attackers? In what ways does Petrus embody the transition South Africa is making between apartheid and democracy? In what sense will Lucy’s child also represent that transition?

During a heated argument about whether animals have souls and how they should be treated, Lurie tells his daughter: “As for the animals, by all means let us be kind to them. But let us not lose perspective. We are of a different order of creation from the animals. Not higher necessarily, just different. So if we are going to be kind, let it be out of simple generosity, not because we feel guilty or fear retribution.” In what ways does this speech echo the logic of racial oppression and apartheid?

Throughout Disgrace, Lurie contemplates writing an opera based on Byron’s last years in Italy. Why is he so drawn to Byron? How does Byron’s situation in Italy resemble Lurie’s own? What ironies do you see in the fact that Lurie composes the music for his opera on a banjo and that he considers including a part for a dog?

From virtually the first page to the last, David Lurie suffers one devastating humiliation after another. He loses his job and his reputation. He is forced to flee Cape Town to live with his daughter on her smallholding in the country. There he is beaten and burned and trapped helplessly in the bathroom while his daughter is raped. Finally, he ends up ferrying dead dogs to the incinerator. Is there a meaning or purpose in his suffering? Is he in some way better off at the end of the novel than he was at the beginning? How has he changed?

Disgrace is narrated in the present tense, largely through David Lurie’s consciousness, though not in the first person. What effect does this method of narration have on how the story unfolds? How would the novel differ if told in the past tense? At what points do you sense a divergence between Lurie’s view of himself and the narrator’s view of him?

In what ways can the events dramatized in Disgrace be seen as a result of South Africa’s long history of racial oppression? What does the novel imply about the larger themes of retribution and forgiveness and reversals of fortune? About the relation between the powerful and the powerless?