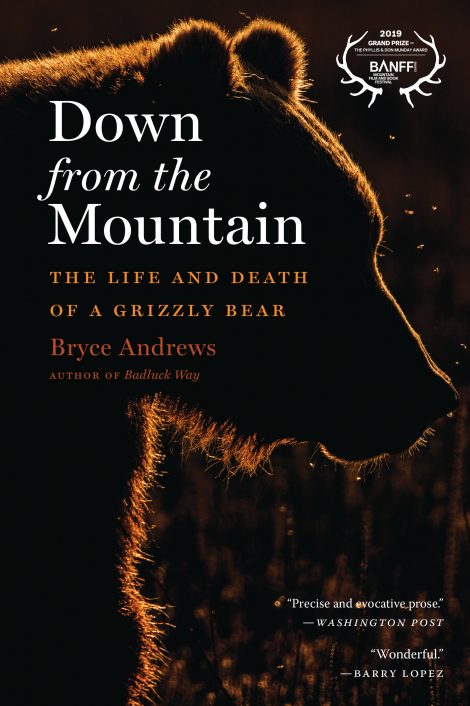 DOWN FROM THE MOUNTAIN

The Life and Death of a Grizzly Bear

The story of a grizzly bear named Millie: her life, death, and cubs, and what they reveal about the changing character of the American West.

An “ode to wildness and wilderness” (Outside Magazine), Down from the Mountain tells the story of one grizzly in the changing Montana landscape. Millie was cunning, a fiercely protective mother to her cubs. But raising those cubs in the mountains was hard, as the climate warmed and people crowded the valleys. There were obvious dangers, like poachers, and subtle ones, like the corn field that drew her into sure trouble.

The story of a grizzly bear named Millie: her life, death, and cubs, and what they reveal about the changing character of the American West.

An “ode to wildness and wilderness” (Outside Magazine), Down from the Mountain tells the story of one grizzly in the changing Montana landscape. Millie was cunning, a fiercely protective mother to her cubs. But raising those cubs in the mountains was hard, as the climate warmed and people crowded the valleys. There were obvious dangers, like poachers, and subtle ones, like the corn field that drew her into sure trouble.

That trouble is where award-winning writer, farmer, and conservationist Bryce Andrews’s story intersects with Millie’s. In this “welcome and impressive work” he shows how this drama is “the core of a major problem in the rural American West—the disagreement between large predatory animals and invasive modern settlers”—an entangled collision where the shrinking wilds force human and bear into ever closer proximity (Barry Lopez).

Bryce Andrews‘ debut, Badluck Way, was the 2014 winner of the Barnes & Noble Discover Great New Writers Award, the 2014 Reading the West Book Award for nonfiction, the 2014 High Plains Book Award for both nonfiction and debut book, and a finalist for the 2014 Washington State Book Award. Born in 1983 and raised in Seattle, Washington, Bryce Andrews migrated east toward the American West. Having spent a decade in the high valleys of Montana, he remains fascinated by the complex and reciprocal relationship between humans, wild animals, and place.

“Andrews’s writing about wilderness is much like that of author Rick Bass, who displays both a healthy reverence for ecology and an easy way of talking about it. This story is not just about Andrews’s shift from rancher to conservationist. It’s an ode to wildness and wilderness in the form of grizzlies. It’s about the tightrope bears walk between living in their mountainous territory, consuming pine nuts, army cutworm moths, and winterkill, versus coming down the mountain to scavenge in human territory. It’s about the resulting relationship between humans and grizzlies when they live in close proximity.” —Outside

“[A] soulful new exegesis on ursid-hominid relations…Down From The Mountain showcases a writer whose talents have fully matured…Down From the Mountain belongs in the pantheon of contemporary conservation writing. It is easy to forget, when arguing over the fate of wildlife, that populations are composed of thinking, feeling individuals; in his sensitive treatment of an ill-fated ursid, Andrews breaches the fences that guard our compassion.” —Ben Goldfarb, High Country News

“Bryce Andrews’ wonderful Down from the Mountain is deeply informed by personal experience and made all the stronger by his compassion and measured thoughts. He outlines clearly the core of a major problem in the rural American West—the disagreement between large predatory animals and invasive modern settlers—without disrespect and without sentimentality. His book is welcome and impressive work.” —Barry Lopez

“In some of the clearest prose the state of Montana has produced, this high-octane story captures the marvel that is a grizzly giving birth in the high wild, follows her down into the human interface, and floods us with the heightened awareness and humbling unease we feel in the presence of Ursus arctos. When the hubris of man-unkind then threatens his protagonists, Andrews lays his life on the line in a sustained attempt to protect them, and the suspense of the telling comes to rival a great crime thriller. Rife with lyrical precision, first-hand know-how, ursine charisma, and a narrative jujitsu flip that places all empathy with his bears, Down from the Mountain is a one-of-a-kind triumph even here in the home of Doug Peacock and Douglas Chadwick.” —David James Duncan, author of The River Why and The Brothers K

“Would that we had more nature writing like Bryce Andrews’s fantastic second book, Down from the Mountain. Part biography of the Mission Valley in Montana, informed by the Blackfeet and Salish histories rooted there, it tells a moving modern tale of how ranchers and big predators overlap uneasily on that land today…Down from the Mountain eschews easy moral scrimmaging…A subtle and beautifully unexpected book…Readers hungry for yet another torch bearer to the ways of thinking of the wild that Barry Lopez and Leslie Marmon Silko made possible should look no further.” —Literary Hub

Gray Wolf, the southernmost, is a fist. East and West Saint Mary’s are shoulders without a head between them. Kakashe is a rampart, with higher pinnacles overtopping it from behind like breakers cresting a seawall. All are made of gray stone, with fissures, walls, and drops that give pause to the most intrepid climbers. They are quick to gather snow, slow in losing it through summer.

The mountains, which form the eastern margin of the Flathead Indian Reservation, shelter a healthy population of grizzly bears. As fall gives way to winter, these bears climb. Disappearing into well-hidden dens, they wait for spring.

Up there in February, it looks like nothing is passing but time, wind, and occasional ravens, but grizzlies are busy underground. In secret, deep-drifted nooks, they breathe and stir. Sows give birth in darkness.

Sometime around the year 2000—it might have been a winter or two before—in a den smelling of earth and ursine rancidity, a cub was born. She probably had a sibling or two, as grizzlies are mostly born in pairs or trios. Until spring came, the writhing of her littermates and her mother’s warmth were her whole world.

Though much is now known about that cub—her life, movements, and the circumstances of her end—no one can say precisely where or when she was born. It is enough to say that she was born in the high country, into a den that no human found or entered. In this, she was like most bears that have been born in the Missions since the recession of Pleistocene ice revealed mountains to the sun.

Emerging into spring, she was shown by a careful mother how to get about in the mountains. She learned which things were to be eaten and which were dangerous. In time, she descended with her mother across ridges and avalanche chutes toward the valley floor. Down in that settled, domesticated landscape, she smelled and saw human beings for the first time. She learned to be wary of gravel roads and highways and to move discreetly among farms and the scattered houses of rural subdivisions.

She slept one more winter in her mother’s den, woke, and made the seasonal round as a yearling. Then, breaking with her family, she went out alone. She grew into adulthood, weighing nearly five hundred pounds and measuring three feet tall at the shoulder. Rising on her hind legs to pluck apples from a tree, she could reach higher than most people. Her forepaws were wide and black padded, and they hardened as she went about mapping the smells, contours, and hazards of her home range. She lived a grizzly’s solitary life, and if she was seen at all by the men and women who lived in the valley, it was as a disappearing flash or a shadow against the night.

In 2002, in the blue light that follows dusk in late summer, she left off foraging and walked down from the foothills into a tangled aspen grove. Crossing Millie’s Woods—the copse for which she’d soon be named—the bear came to a place where she could see farmstead lights spread across the floor of the Mission Valley, glittering like shards of a bottle dropped from a great height.

While darkness thickened, she shuffled along a well-worn game trail, giving a generous berth to barnyards and houses. Hearing the faraway barking of dogs, she kept to the low ground of potholes and sloughs.

She came in search of ripening apples and the chokecherries weighing down the branches along the banks of irrigation canals. Descending step by cautious step, keeping pace with the night, she left the Mission Range behind. In doing so, she walked out of a wilderness that has remained essentially unchanged since the end of the last ice age, and into an unforgiving arcadia. The primeval valley—the fertile, deep soil that had succored native people and grizzly bears for thousands of years—was hidden by roads, power lines, prefabricated ranch-style houses, tilled fields, and uncountable miles of barbwire fence.

Cars and trucks hurtled day and night along Highway 93. Except for the timbered corridors along streams, the land was settled, cleared, and cropped. There were pastures and hayfields, gardens and chicken coops, pigsties, grain bins, and trash piles—all manner of things that could lead a bear into conflict with people or livestock, and therefore to ruin. The farms were small by Montana standards, with most holdings measuring between twenty and eighty acres. The landscape was not paved over or entirely ruined for a grizzly bear’s purposes, as parts of the Missoula and Bitterroot valleys are, but it was a difficult, dangerous place to survive.