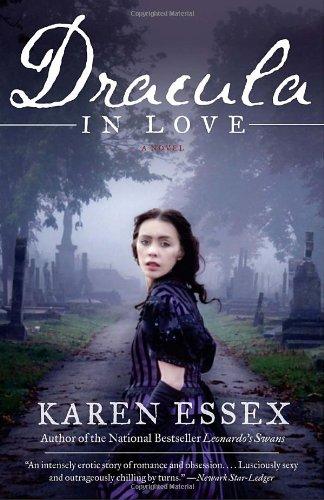 From the shadowy banks of the river Thames to the wild and windswept Yorkshire coast, Dracula’s eternal muse, Mina Murray, vividly recounts the intimate details of what really transpired between her and the Count—the joys and terrors of a passionate affair that has linked them through the centuries, and her rebellion against her own frightening preternatural powers.

From the shadowy banks of the river Thames to the wild and windswept Yorkshire coast, Dracula’s eternal muse, Mina Murray, vividly recounts the intimate details of what really transpired between her and the Count—the joys and terrors of a passionate affair that has linked them through the centuries, and her rebellion against her own frightening preternatural powers.

Mina’s version of this gothic vampire tale is a visceral journey into Victorian England’s dimly lit bedrooms, mist-filled cemeteries, and asylum chambers, revealing the dark secrets and mysteries locked within. Time falls away as she is swept into a mythical journey far beyond mortal comprehension, where she must finally make the decision she has been avoiding for almost a millennium.

Bram Stoker’s classic novel offered one side of the story, in which Mina had no past and bore no responsibility for the unfolding events. Now, for the first time, the truth of Mina’s personal voyage, and of vampirism itself, is revealed. What this flesh and blood woman has to say is more sensual, more devious, and more enthralling than the Victorians could have expressed or perhaps even have imagined.

Karen Essex is the author of Kleopatra, Pharaoh, and the international bestseller Leonardo’s Swans, which won Italy’s prestigious 2007 Premio Roma for foreign fiction. An award-winning journalist and a screenwriter, she lives in Los Angeles, California.

“Dark, gothic, and utterly sensual, Dracula in Love is the novel for Twilight‘s grownup fans. The character of Mina Murray leaps from the pages in an extraordinary confession of what truly happened between her and Count Dracula. In this novel of forbidden desires and secrecy, purity is an overrated virtue.”
—Michelle Moran, bestselling author of Nefertiti: A Novel

“The King of the Undead in all his manifestations confronts Victorian society, reclaiming his throne as the ultimate vampire, before whom all other paltry vampires in literature wither away. Dracula in Love is a sensual fantasy feast, a flight of the imagination, a darkly rich pleasure. Like The French Lieutenant’s Woman, the novel explores and exposes the stifling confines of Victorian society, especially upon women. But the means of deliverance is altogether different.”—Margaret George, bestselling author of The Memoirs of Cleopatra

“Karen Essex turns the legendary tale of immortal love into a seductive, blood-tingling celebration of the senses; Mina Harker is a heroine for the ages — bold, intrepid, and in love with one of the most dangerous, irresistible men in history. If you read only one more vampire novel, let it be this one.”
—C.W. Gortner, author of The Last Queen and The Confessions of Catherine de Medici

In the prologue, Mina Murray writes, “The truth is we must fear monsters less and be warier of our own kind.”  What “monsters” evoke fear in the book?  Which humans evoke fear?

How does feminism play into Mina’s choices? Miss Hadley’s? Lucy’s? Kate’s?  How are these women similar?  Which of the women do you ultimately consider more liberated?

How does Mina evolve throughout the story?  What changes her? Where does she get her true power?  Do you agree with her choices?

In some ways, the book is an exploration of free will versus fate. Are there any victims in the story, and why are they victims? To what or whom are they victims?  Do you believe what Dracula says, that a person cannot be made to do something s/he has not chosen on some level?

Did Dracula in Love deepen your understanding of the roots of vampirism?

Discuss the different elements of vampire folklore in the book (i.e. The Lamia, the story of Lilith, the Sidhe, the ghost tales of Whitby) and the ways in which they have contributed to modern day vampire myths.

How do the vampires differ from vampires in other vampire books, films, and television shows, whether classic or contemporary?

Discuss sexuality as it pertains to different characters in the book. (Mina and Jonathan. Mina and the Count. Lucy and Arthur. Lucy and Morris. Mina and John Seward. Jonathan and the Lamia.)

What symptoms and behaviors deemed a patient “insane” in Lindenwood?  How does the characterization of the insane relate to Victorian ideology?

In what ways does Dracula in Love reflect the Victorian obsession with Darwin’s theory of evolution and other scientific and medical advancements of the time? What 20th century events does it foreshadow?

What are the most poignant ways in which Dracula in Love differs from Bram Stoker’s Dracula?  Do you find one account more credible than the other?