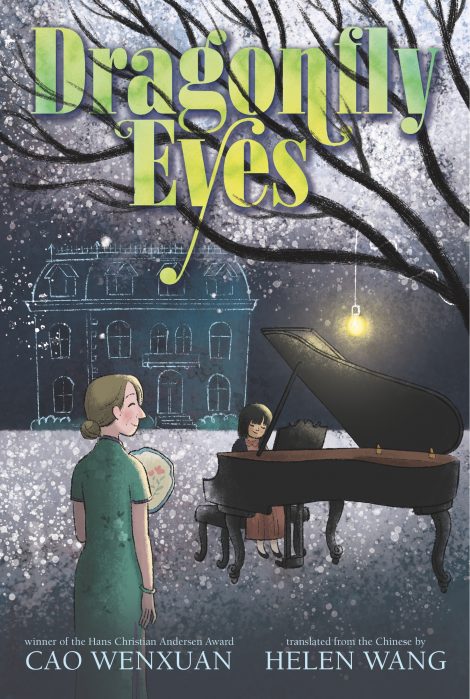 Ah-Mei and her French grandmother, Nainai, share a rare bond. Maybe it’s because Ah-Mei is the only girl grandchild. Or maybe it’s because the pair look so much alike and neither resembles the rest of their Chinese family. Politics and war make 1960s Shanghai a hard place to grow up, especially when racism and bigotry are rife, and everyone seems suspicious of Nainai’s European heritage and interracial marriage. In this time of political upheaval, Ah-Mei and her family suffer much—and when the family silk business falters, they are left with almost nothing. Ah-Mei and her grandmother are resourceful, but will the tender connection they share bring them enough strength to carry through?

Ah-Mei and her French grandmother, Nainai, share a rare bond. Maybe it’s because Ah-Mei is the only girl grandchild. Or maybe it’s because the pair look so much alike and neither resembles the rest of their Chinese family. Politics and war make 1960s Shanghai a hard place to grow up, especially when racism and bigotry are rife, and everyone seems suspicious of Nainai’s European heritage and interracial marriage. In this time of political upheaval, Ah-Mei and her family suffer much—and when the family silk business falters, they are left with almost nothing. Ah-Mei and her grandmother are resourceful, but will the tender connection they share bring them enough strength to carry through? This multigenerational saga by one of China’s most esteemed children’s authors takes the reader from 1920s France to a ravaged postwar Shanghai and through the convulsions of the Cultural Revolution. 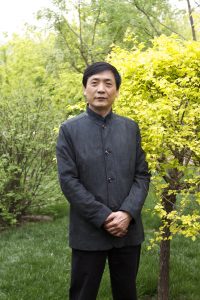 Cao Wenxuan, author of the acclaimed Bronze and Sunflower, is the recipient of the 2016 Hans Christian Andersen Award. He has also won several of China’s important awards for children’s literature. A professor of Chinese literature at Peking University, Cao Wenxuan has seen many of his books become bestsellers in China, and his work has been translated into French, Russian, German, Japanese, and Korean.

“This atmospheric work translated from the Chinese renders the trials and tribulations befalling the family of Du Meixi. . . By turns sentimental and tragic, the plot juxtaposes quotidian details against factual historical background, including Japan’s 1937 invasion of China, in illustrating the family’s plight.” —Kirkus Reviews

Ah Mei looked different from other children; she was different.

Wherever she went, silent eyes stared at her from all directions. She would appear a little shy and embarrassed, but inside she would feel a deep swelling of pride. She would rise very subtly onto her tiptoes, push her slender neck forward, and raise her head. Then her little white face would turn very subtly, scanning the crowd as though searching for someone.

People stopped talking the moment they saw her, as though caught by surprise, as though while they were taking a stroll by the river, mindlessly watching the flow of the water, a sudden chill had swept up from the surface. One by one, they stopped, until they were standing there, spellbound — countless pairs of eyes watching her every move, without a moment’s thought as to how it might make her feel.

It was as though this little girl had floated down from heaven, and the people around her were caught in a trance.

Ah Mei had known this gaze for as long as she could remember, this combination of surprise, curiosity, fascination, and appreciation that followed her wherever she went. And she knew it was because of Nainai.

Nainai was French. Born in the famous port city of Marseilles, she had grown up by the bright-blue Mediterranean Sea. Nainai was her grandmother, and without Nainai, Ah Mei wouldn’t exist.

Ah Mei lived in Shanghai. At least, she lived there until she was thirteen.

From the time Ah Mei came into this world to the year Nainai passed away, when Ah Mei was fourteen, Nainai never stopped telling her stories about her life with Yeye, Ah Mei’s grandfather, stories filled with adventure and romance. Nainai poured her heart and soul into the tales, even when Ah Mei was still very young. She didn’t stop to wonder if Ah Mei could understand or not — as long as those bright little eyes kept watching and blinking, Nainai would keep talking, her soft-spoken Shanghainese dotted with beautiful French words. Eventually, she’d remember that Ah Mei probably couldn’t understand what she was saying. Then she’d laugh and continue telling the stories anyway, pouring her heart and soul into them once again.

Deep down, she knew she was telling the stories for her own benefit. She’d talk as she pushed Ah Mei’s stroller into Beijing West Road, as she held Ah Mei’s little hand while they walked slowly beneath the apricot trees, and as she lay down on the bed with Ah Mei, their two heads sharing the same pillow. She told the stories in no particular order, and she repeated them too often to count. But for Ah Mei, it was like hearing a new story every time, and she was constantly asking, “What happened next?” The stories were like shiny beads, each offering a glimpse of the bigger story.

Over the years, Ah Mei strung the shiny beads together, and the sequence of events began to take shape in her mind. But there were gaps, and it was clear that Nainai was holding back certain parts. As Ah Mei got older, she could guess what they were. She understood, in a naive kind of way, that there were some things that Nainai did not feel comfortable sharing with her. She would never forget Nainai’s look of embarrassment when those awkward moments arose. Then Ah Mei would peer into Nainai’s deep-blue eyes and wag her finger playfully before running it down Nainai’s nose. Nainai would pretend to bite at the finger, then pinch Ah Mei’s cheeks or hug her so tightly she could hardly breathe. As soon as Ah Mei tried to pull away, Nainai would giggle and let go. Nainai laughed differently from all the other ladies Ah Mei knew. Nainai had been in Shanghai for a long time — she belonged there and spoke Shanghainese fluently — but when she laughed, she was French.

Du Meixi, Ah Mei’s grandfather and Nainai’s husband, was born into a wealthy family, a very wealthy family. Their money came from the family silk business, which reached halfway around the world to Europe. It was Du Meixi’s father who had set his sights on Europe, and, to that end, had entrusted the running of the Shanghai business to his cousin and gotten on a Europe-bound boat himself. Having traveled the length and breadth of Europe, he had finally settled in France and established the European side of the business in Lyons. It had flourished and expanded: the Chinese silk company became well known in Europe and its products were highly sought after.

When Du Meixi was twenty-five, his father had wanted him to join him in Lyons and take charge of the business there. Du Meixi had refused, on the grounds that he was still grieving for his late wife, who had died of an illness. His father knew that was not the real reason: it was he who had insisted on the marriage, but Du Meixi had never been happy. He had always been a strict father, but this time he would not force his son against his wishes. He simply turned around and, with his back to Du Meixi, sighed and said, “As you wish.”

The previous few years had been oppressive for Du Meixi. He had felt sad all the time, sometimes even desperate. But he had come to realize that his old life was over, and he was determined now to start a new life. With a friend’s help, he cast aside everything from his old life, and, holding his head high and pushing out his chest, he climbed aboard a steamer and became a sailor. The ship belonged to a French company and sailed back and forth between Shanghai and Marseilles all year round.

Du Meixi loved being at sea. He was enthralled by the boundlessness of the water, the wind driving the clouds across the sky, the continuous rise and fall of the waves that rolled over the surface of the water, the islands in the distance floating like mirages, the gulls dancing in the spray behind the boat, the fish leaping in the brilliant moonlight, the merging of sea and sky. He had never known air so fresh. The world had never seemed so deep or so vast. Life on the steamer was simple, yet full of all kinds of unexpected danger. His previous life seemed even duller in comparison. Doused in the salty tang of the sea, he was happier than he had ever been. He learned the skills he needed on the job and soon rose to assistant helmsman and then to second-in-command.

Meanwhile, the family silk business continued to flourish and expand. It had spread across Europe as smoothly as a cloud floating across the sky. And now, having covered Europe, it was heading toward the Americas.

But Du Meixi, by nature drawn to freedom and a life without restriction, was still not interested in being a part of the family business.

His father looked up at the sky and sighed. As long as the family in Shanghai was looking after Du Meixi’s children — a little boy and a little girl — he could spend the rest of his life drifting about in the wind and the waves if that was what he wanted.