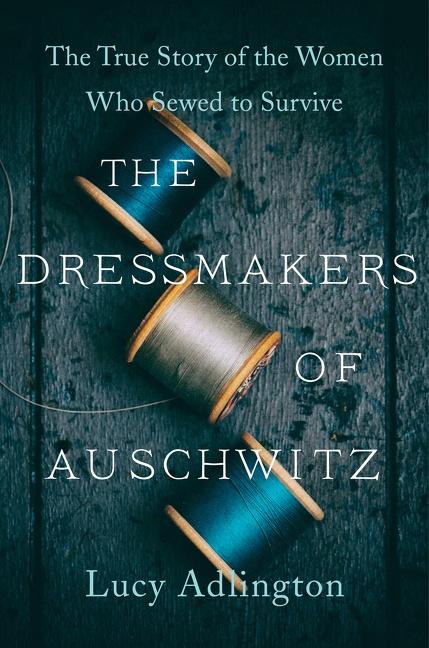 THE DRESSMAKERS OF AUSCHWITZ

The True Story of the Women Who Sewed to Survive

A powerful chronicle of the women who used their sewing skills to survive the Holocaust, stitching beautiful clothes at an extraordinary fashion workshop created within one of the most notorious WWII death camps.

At the height of the Holocaust twenty-five young inmates of the infamous Auschwitz-Birkenau concentration camp—mainly Jewish women and girls—were selected to design, cut, and sew beautiful fashions for elite Nazi women in a dedicated salon. It was work that they hoped would spare them from the gas chambers.

A powerful chronicle of the women who used their sewing skills to survive the Holocaust, stitching beautiful clothes at an extraordinary fashion workshop created within one of the most notorious WWII death camps.

At the height of the Holocaust twenty-five young inmates of the infamous Auschwitz-Birkenau concentration camp—mainly Jewish women and girls—were selected to design, cut, and sew beautiful fashions for elite Nazi women in a dedicated salon. It was work that they hoped would spare them from the gas chambers.

This fashion workshop—called the Upper Tailoring Studio—was established by Hedwig Höss, the camp commandant’s wife, and patronized by the wives of SS guards and officers. Here, the dressmakers produced high-quality garments for SS social functions in Auschwitz, and for ladies from Nazi Berlin’s upper crust.

Drawing on diverse sources—including interviews with the last surviving seamstress—The Dressmakers of Auschwitz follows the fates of these brave women. Their bonds of family and friendship not only helped them endure persecution, but also to play their part in camp resistance. Weaving the dressmakers’ remarkable experiences within the context of Nazi policies for plunder and exploitation, historian Lucy Adlington exposes the greed, cruelty, and hypocrisy of the Third Reich and offers a fresh look at a little-known chapter of World War II and the Holocaust. 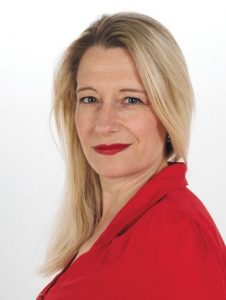 Lucy Adlington is a British novelist and clothes historian with more than twenty years’ experience researching social history and writing fiction and nonfiction. She lives in Yorkshire, UK.

“Lucy Adlington tells of the horrors of the Nazi occupation and the concentration camps from a fascinating and original angle.  She introduces us to a little known aspect of the period, highlighting the role of clothes in the grimmest of societies imaginable and giving an insight into the women who stayed alive by stitching.”–Alexandra Shulman, Former Editor in Chief of British Vogue

In The Dressmakers of Auschwitz, Lucy Adlington has unveiled not one but several long-hidden histories: the tale of a group of compassionate and audacious Jewish women who sewed for their lives; the story of clothes in the Holocaust; and the history of the fashion industry in World War II. Adlington has expertly interwoven these fascinating strands into an utterly absorbing, important and unique historical read.”–Judy Batalion New York Times bestselling author of The Light of Our Days: The Untold Story of Women Resistance Fighters in Hitler’s Ghettos

One of the Few Who Survived

After two years I came to the Auschwitz headquarters building, where I worked as a seamstress in the sewing room for SS families. I worked 10–12 hours a day. I am one of the few who survived the hell of Auschwitz.– Olga Kovácz1

By the light of two windows, a group of women in white headscarves sat sewing at long wooden tables, heads bent over garments, needles in, needles out. It was a basement room. The sky beyond the windows did not represent freedom. This was their refuge.

They were surrounded by all the paraphernalia of a thriving fashion salon; all the tools of their trade. On the tables, coiling tape measures, scissors and bobbins of thread. Stacked nearby, bolts of every kind of fabric. Scattered around, fashion magazines and the crisp tissue of dressmaking patterns. Next to the main workshop was a private fitting room for clients, all under the aegis of clever, capable Marta, who not long since had run her own successful salon in Bratislava. Supporting Marta was Borishka.

The seamstresses did not sew in silence. In a jumble of languages – Slovakian, German, Hungarian, French, Polish – they chatted about their work, their homes, their families . . . even joked among themselves. Most of them were young, after all, late teens, early twenties. The youngest was only fourteen. Little Hen, they called her, as she darted about the salon fetching pins and sweeping up snipped threads.

Friends worked together. There was Irene, Bracha and Renée, all from Bratislava, and Bracha’s sister Katka, who stitched smart wool coats for their clients, even when her own fingers were frozen with cold. Baba and Lulu were another two seamstresses who were close friends, one serious, one mischievous. Hunya, in her mid-thirties, was both friend and mother-figure, and a force to be reckoned with. Olga, a similar age to Hunya, seemed ancient to the younger girls.

They were all Jews.

Sewing alongside them were two French communists, corsetière Alida and resistance fighter Marilou, both arrested and deported for opposing the Nazi occupation of their country.

Twenty-five women working in total, needles in, needles out. When one was called away from work and never seen again, Marta would quickly arrange for another to take her place. She wanted as many female prisoners as possible to join this refuge in the basement. In this room they had names. Beyond the salon they were nameless, merely numbers.

There was certainly work enough for everyone. The big, black order book was so full there was a six-month waiting list, even for very high status clients in Berlin. Priority for orders was given to their local clients, and to the woman who had established the salon. Hedwig Höss. Wife of the commandant of Auschwitz concentration camp.

One day, a day like any other, there was a cry of dismay in the basement salon and the horrible smell of burnt fabric. Catastrophe. While pressing a dress, the fabric had been scorched by a too-hot iron; the burn mark was right at the front, no way of hiding it. The client was due for a fitting the very next day. The clumsy dressmaker was wild with anxiety, crying, ‘What can we do? What can we do?’

The others stopped work, feeling her panic. This was not simply a question of a ruined dress. The clients of this fashion workshop were wives of high-ranking men from the Auschwitz SS garrison. Men notorious for beatings, torture and mass murder. Men with total control over the lives and fates of every woman in that room.

‘You know what we’ll do? We’ll take out this panel here, and insert this fresh fabric here. Quickly now . . .’

The next day the SS wife arrived for her appointment in the fashion salon. She tried on her new dress and looked, perplexed, in the mirror of the fitting room.

Disaster averted. For the time being.

The dressmakers went back to their work, needles in, needles out, and lived to see another day as prisoners in Auschwitz.

The forces that converged to create a fashion salon in Auschwitz were also responsible for shaping and fracturing the lives of the women who would eventually work there. Two decades earlier, when the dressmakers were young girls or mere infants, they could have no concept of how their fates would converge in such a place. Even the adults in their lives would have struggled to comprehend a future that included couture sewing in the midst of industrialised genocide.

The world is very small when we are children, yet rich with details and sensation. The itch of wool against the skin, the fumbling of cold fingers on stubborn buttons, the fascination of threads unravelling from a torn trouser knee. Our horizon is first within the walls of a family home, then spreads to street corners, fields, forests and cityscapes. There is no foreboding of what will happen in the future. In time, memories and mementoes are all that remain of lost years.