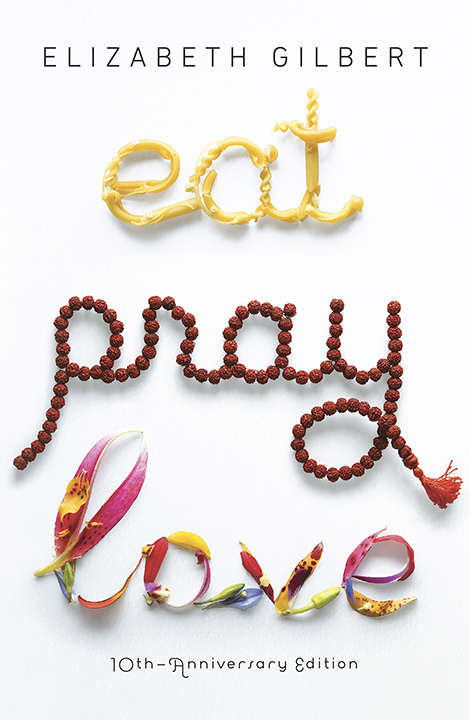 One Woman's Search for Everything Across Italy, India and Indonesia

The 10th anniversary edition of one of the most iconic, beloved, and bestselling books of our time.

Elizabeth Gilbert’s Eat Pray Love touched the world and changed countless lives, inspiring and empowering millions of readers to search for their own best selves. Now, this beloved and iconic book returns in a beautiful 10th anniversary edition, complete with an updated introduction from the author, to launch a whole new generation of fans.

In her early thirties, Elizabeth Gilbert had everything a modern American woman was supposed to want—husband, country home, successful career—but instead of feeling happy and fulfilled,

The 10th anniversary edition of one of the most iconic, beloved, and bestselling books of our time.

Elizabeth Gilbert’s Eat Pray Love touched the world and changed countless lives, inspiring and empowering millions of readers to search for their own best selves. Now, this beloved and iconic book returns in a beautiful 10th anniversary edition, complete with an updated introduction from the author, to launch a whole new generation of fans.

In her early thirties, Elizabeth Gilbert had everything a modern American woman was supposed to want—husband, country home, successful career—but instead of feeling happy and fulfilled, she was consumed by panic and confusion. This wise and rapturous book is the story of how she left behind all these outward marks of success, and set out to explore three different aspects of her nature, against the backdrop of three different cultures: pleasure in Italy, devotion in India, and on the Indonesian island of Bali, a balance between worldly enjoyment and divine transcendence.

Elizabeth Gilbert is the #1 New York Times bestselling author of Eat, Pray, Love, and several other internationally bestselling books of fiction and nonfiction. Gilbert began her career writing for Harper’s Bazaar, Spin, The New York Times Magazine and GQ, and was a three-time finalist for the National Magazine Award. Her story collection Pilgrims was a finalist for the PEN/Hemingway award; The Last American Man was a finalist for both the National Book Award and the National Book Critics Circle Award. The follow-up memoir Committed became an instant #1 New York Times bestseller. Her latest novel, The Signature of All Things, was named a Best Book of 2013 by The New York Times, O Magazine, The Washington Post, The Chicago Tribune, and The New Yorker. Gilbert’s short fiction has appeared in Esquire, Story, One Story, and the Paris Review.

“Gilbert’s prose is fueled by a mix of intelligence, wit and colloquial exuberance that is close to irresistible.”—The New York Times Book Review

“A meditation on love in its many forms—love of food, language, humanity, God, and most meaningful for Gilbert, love of self.”—Los Angeles Times

1. Gilbert writes that “the appreciation of pleasure can be the anchor of humanity,” making the argument that America is “an entertainment-seeking nation, not necessarily a pleasure-seeking one.” Is this a fair assessment?

2. After imagining a petition to God for divorce, an exhausted Gilbert answers her phone to news that her husband has finally signed. During a moment of quietude before a Roman fountain, she opens her Louise Glück collection to a verse about a fountain, one reminiscent of the Balinese medicine man’s drawing. After struggling to master a 182-verse daily prayer, she succeeds by focusing on her nephew, who suddenly is free from nightmares. Do these incidents of fortuitous timing signal fate? Cosmic unity? Coincidence?

3. Gilbert hashes out internal debates in a notebook, a place where she can argue with her inner demons and remind herself about the constancy of self-love. When an inner monologue becomes a literal conversation between a divided self, is this a sign of last resort or of self-reliance?

4. When Gilbert finally returns to Bali and seeks out the medicine man who foretold her return to study with him, he doesn’t recognize her. Despite her despair, she persists in her attempts to spark his memory, eventually succeeding. How much of the success of Gilbert’s journey do you attribute to persistence?

5. Prayer and meditation are both things that can be learned and, importantly, improved. In India, Gilbert learns a stoic, ascetic meditation technique. In Bali, she learns an approach based on smiling. Do you think the two can be synergistic? Or is Ketut Liyer right when he describes them as “same-same”?

6. Gender roles come up repeatedly in Eat, Pray, Love, be it macho Italian men eating cream puffs after a home team’s soccer loss, or a young Indian’s disdain for the marriage she will be expected to embark upon at age eighteen, or the Balinese healer’s sly approach to male impotence in a society where women are assumed responsible for their childlessness. How relevant is Gilbert’s gender?

7. In what ways is spiritual success similar to other forms of success? How is it different? Can they be so fundamentally different that they’re not comparable?

8. Do you think people are more open to new experiences when they travel? And why?

9. Abstinence in Italy seems extreme, but necessary, for a woman who has repeatedly moved from one man’s arms to another’s. After all, it’s only after Gilbert has found herself that she can share herself fully in love. What does this say about her earlier relationships?

10. Gilbert mentions her ease at making friends, regardless of where she is. At one point at the ashram, she realizes that she is too sociable and decides to embark on a period of silence, to become the Quiet Girl in the Back of the Temple. It is just after making this decision that she is assigned the role of ashram key hostess. What does this say about honing one’s nature rather than trying to escape it? Do you think perceived faults can be transformed into strengths rather than merely repressed?

11. Sitting in an outdoor café in Rome, Gilbert’s friend declares that every city—and every person—has a word. Rome’s is “sex,” the Vatican’s “power”; Gilbert declares New York’s to be “achieve,” but only later stumbles upon her own word,antevasin, Sanskrit for “one who lives at the border.” What is your word? Is it possible to choose a word that retains its truth for a lifetime?