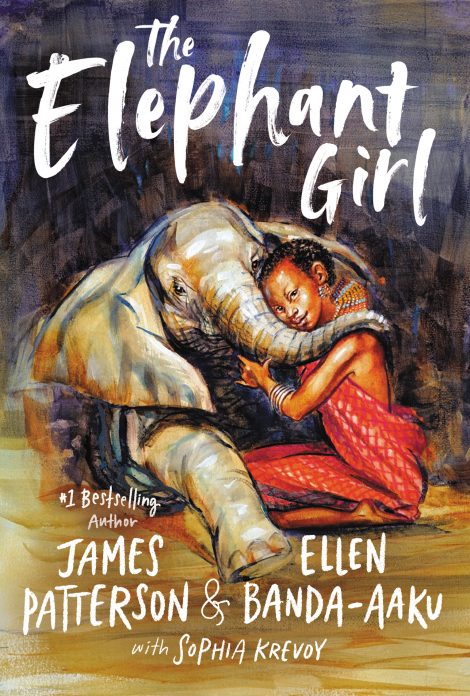 Inspired by true events, The Elephant Girl is a moving exploration of the bonds between creatures and the power of belonging.

James Patterson is the world’s bestselling author. The creator of Max Einstein and Middle School, he founded JIMMY Patterson to publish books that young readers will love. He lives in Florida with his family.

Ellen Banda-Aaku is an award-winning author and producer. She has lived, studied, and worked in Ghana, South Africa, and Zambia, and currently lives in the UK with her two children.

AN INDIE NEXT PICK AND AN AMAZON BEST BOOK OF THE MONTH!

“Animal lovers, you are in for a treat!” –RJ Julia Booksellers (Madison, CT)

1. What is the most surprising fact you learned about elephants? Did the story inspire you to research more about endangered species? What other facts can you discover?

2. When describing the Eunoto ceremony, Jama explains how Maasai traditions have had to change over the years (p. 8). Why might this cause tension in the community? Do you think it’s important for traditions to evolve if necessary?

3. In chapter one, Jama speaks about conflicting emotions and her mother looking as though, “two feelings were fighting within her” (p. 4) How does this idea remain a consistent theme throughout the novel? In what other instances do characters face contrasting feelings?

4. The authors often describe the humans using animal comparisons such as, “delicate as a hummingbird”, “just like a lion”, “aggressive as a hippo”, and “look like a spider” (pp. 13, 19, 24-25). Does this highlight the similarities between species? As much as it gives humans animalistic qualities, does it also help humanize the animals?

5. What does Kokoo Naserian’s proverb, “coal laughs at ashes not knowing the same fate will befall it” mean? (pp. 72-73) What do the proverbs symbolize, especially coming from an elder like Kokoo Naserian? Why are they important?

6. Describe Jama’s connection with Mbegu. How does it grow when they both experience loss? How do their journeys continue to mirror each other, all the way to the end of the novel?

7. Why is Jama so insistent that the tragic death in her community is, “not the elephants’ fault” (p. 117)? How does this moment illustrate Jama’s strength, and her compassion for all creatures?

8. In the airplane, Matthew’s doubt in Jama’s skills jeopardizes Mbegu’s health. Why? How does Jama’s confidence grow throughout the story? What has the biggest impact on her self-esteem?

9. How does Jama and Leku’s relationship change over the course of the novel? Did you predict where they would end up? Why or why not?

10. The author’s note speaks to the real-life threats to elephants that inspired the novel. What real-life lessons or messages did you take away from this fictional story?

Lessons from Writing The Elephant Girl

Ellen is telling lies AGAIN!’ it was an exasperated statement my siblings often made to shut me up. And when I was squealed on,  my mother would materialise and tell me off with ominous examples of what happened to ‘liars.’ The point being if the story I was telling hadn’t happened, then it was untrue!

But I wasn’t lying, I was telling the stories that grew in my head simply because they kept coming and I couldn’t stop them. They formed in my head since as far back as my first memory.  Vivid images of people and animals and things they did and said. Some were dreams others just popped up in my head when I was awake. They spewed out of me, annoying, entertaining and puzzling family and friends in equal measure.

Then soon after my fourth birthday my father –  the bread winner of his young family –  died, so my mother moved us into a newly constructed housing estate built in Lusaka to accommodate low income earners.

The estate was hundreds of square-shaped white, dwellings  with roofs of red corrugated iron. The houses stood so close together  we heard the neighbours sneeze and flush their toilets. And in that neighbourhood I found a willing unquestioning audience for my stories.

Unlike most authors I have come across, I didn’t read a lot as a child. My sister was an avid reader so most evenings she told me the stories she read and I would then pass them on – embellished for drama and effect to the many children living on the estate.

Despite having access to books and being a storyteller, it never occurred to me to write anything myself.  With retrospection, which came years later, I realised why. As one grows up, one aspires to be what one sees. Authors didn’t exist in my world and although I was surrounded by books that told  engaging stories, they were set in a world that was completely different from  mine. So I didn’t perceive my stories as belonging in a book nor see myself as an author.

Hence, I started writing late. In my mid 30s and as a mother of two I wrote my first book.  It was only when I began engaging with audiences as an author, that I realised that the stories that formed in my head as a child, were my creativity.

Up until this point I thought I knew what there was to know about elephants; they are the largest land mammal, they are herbivores, they have long gestation periods and even longer memories.  I definitely didn’t see them as friends to human beings.

Writing The Elephant Girl changed all that. Coincidentally, shortly before I got involved in writing the story, I happened to spend some time at a nature reserve on the outskirts of Lusaka. There I met an elephant keeper – Jama in the story later becomes one –  who was very passionate about his herd and shared a lot of information about elephants. I was amazed at the close relationship that existed between the elephant keeper and his herd of three elephants. The time I spent getting to know the elephants was a heart-warming experience for me.

As I sat down to write the story of Jama and Mbegu I felt I had a good understanding of elephants in general and an appreciation of the relationship that can exist between  a human being and an elephant.

However the writing of The Elephant Girl has also made me more aware of the plight of elephants and the complexities around the issue of protecting them. Factors such as poaching due to demand for their tusks and the shrinking of their habitat are endangering the lives of elephants as their numbers continue to drop. Also, the relationship between man and elephant, particularly those that live in close proximity, is becoming increasingly acrimonious. Human communities that have their crops destroyed by elephants are naturally unsympathetic to them. On the other hand elephants are weary of humans because of poaching. And because both depend on the land to survive, they clash to protect their environments which are shrinking.

However as long as both man and elephant are capable of thought and deep feeling there is hope. I hope the readers of this book, like me, get to understand elephants and come away with an overall appreciation of  the issues surrounding elephants. More significantly, I hope the book gives the readers hope.

The Elephant Girl is a story of love.  The beauty of the book is that it is about a pure and innocent relationship between a girl and an elephant. A relationship unencumbered by factors such as suspicion, politics and greed which cause the tensions between the species. That is what makes the story of Jama and Mbegu so special. It shows us that where there is love, there is hope!