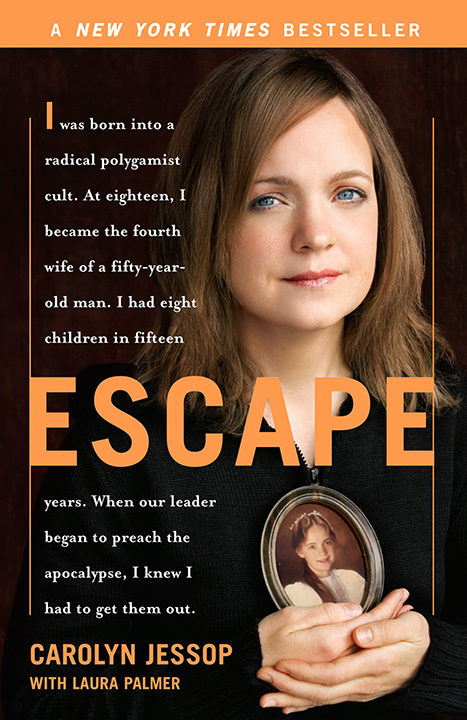 A New York Times bestseller with more than 100,000 copies sold in hardcover, Escape is the dramatic account of life inside an ultra-fundamentalist sect, and one woman’s courageous flight to freedom with her children.

When she was eighteen years old, Carolyn Jessop was coerced into an arranged marriage with Merril Jessop, a man thirty-two years her senior who already had three wives. She was born into and raised in the Fundamentalist Church of Jesus Christ of Latter-day Saints (FLDS), the radical offshoot of the Mormon church, where plural marriages were part of the heritage.

A New York Times bestseller with more than 100,000 copies sold in hardcover, Escape is the dramatic account of life inside an ultra-fundamentalist sect, and one woman’s courageous flight to freedom with her children.

When she was eighteen years old, Carolyn Jessop was coerced into an arranged marriage with Merril Jessop, a man thirty-two years her senior who already had three wives. She was born into and raised in the Fundamentalist Church of Jesus Christ of Latter-day Saints (FLDS), the radical offshoot of the Mormon church, where plural marriages were part of the heritage. Over the next fifteen years, Jessop had eight children and withstood her husband’s psychological abuse and the watchful eyes of his other wives. She wanted out, but no woman in the country had ever escaped from the FLDS and managed to get her children out, too. In 2003, Jessop chose freedom over fear and fled—with her children. She had twenty dollars to her name.

Escape exposes a world created by religious fanatics who, in the name of God, deprive their followers of the right to make choices. Against this background, Carolyn Jessop’s flight takes on an extraordinary, inspiring power.

Carolyn Jessop was born into the Fundamentalist Church of Jesus Christ of Latter-Day Saints, a group splintered from and renounced by the Mormon Church, and spent most of her life in Colorado City, Arizona, the main base of the FLDS. Since leaving the group in 2003, she has lived in West Jordon, Utah, with her eight children. Laura Palmer is the author of Shrapnel in the Heart and collaborated on five other books, the most recent being To Catch a Predator with NBC’s Chris Hansen. She lives in New York City.

“Escape provides an astonishing look behind the tightly drawn curtains of the FLDS Church, one of the most secretive religious groups in the United States. The story Carolyn Jessop tells is so weird and shocking that one hesitates to believe a sect like this, with 10,000 polygamous followers, could really exist in 21st-century America. But Jessop’s courageous, heart-wrenching account is absolutely factual. This riveting book reminds us that truth can indeed be much, much stranger than fiction.” —Jon Krakauer, author of Under the Banner of Heaven, Into Thin Air, and Into the Wild

1. Carolyn Jessop tells us that she was born against the odds, after her mother’s difficult pregnancy. How did her spirit of survival help her throughout her life? What gave her the courage to ultimately escape her fate?

2. How is religion used to justify FLDS beliefs about sex, marriage, and parenting? How do these beliefs affect the daily lives of FLDS members? How are women particularly affected by the risk of sexual shame?

3. What are the biggest differences in the way men and women are treated in the FLDS? How does this influence the relationships between spouses?

4. Discuss the dynamics between the wives described by Carolyn. How did the situation cause cruel behavior, often driven by scarce resources? What does it take to reduce humans to such destructive levels of competition?

5. Why do you think polygamy has continued to exist in the modern world? Why would a woman stay in a community that strips her of power? Are there any advantages to living in such a situation?

6. How do Carolyn’s recollections of her childhood both sustain her and haunt her? What did her two mothers teach her about the role of women in the world?

7. How do the Nusses at times act like typical teenagers? What alliances does Carolyn build with them? What does marriage do to the Nusses’s sense of sisterhood?

8. Early on, Carolyn dreamed of becoming a doctor. How would you describe the FLDS’s attitude toward healthcare? What was the rationale for ignoring her near-deadly experiences with pregnancy? What was the FLDS’s approach to her children’s healthcare needs? Ultimately, what forms of healing, emotional and physical, was Carolyn able to find?

9. How do FLDS children adapt to living in extremely large families? Do they typically accept their new brothers and sisters? How are favoritism and competition handled? How does this experience shape the way they view the world and their relationships with others?

10. Carolyn mentioned on “The Oprah Winfrey Show” that she favors decriminalizing polygamy, so that “people could live honestly, in the open, with dignity, and their children could be more mainstreamed.” What are your thoughts about such a plan? How far do you believe legislators can go in dictating behaviors that contradict religious beliefs?

11. How did you react when Carolyn described the ex-convict who began working at her husband’s motel? Why didn’t Merril care about her personal safety? How was Colorado City affected by the fact that the FLDS controlled local law enforcement?

12. Well into her marriage, at a later age than most FLDS women, Carolyn was allowed to receive the prophecy of her destiny. The reading predicted that she had special intellectual gifts that would be applied to unusual purposes. Why were such revelations of a woman’s destiny kept private? Do you believe she received any sort of true prophecy that day?

13. Carolyn describes how Warren Jeffs used 9/11 as an excuse to launch bizarre survivalist training. What led so many people in the FLDS to follow Jeffs’s apocalyptic preaching at that point? What happened to those who were skeptical?

14. How was money managed in Carolyn’s family and within the FLDS? How did Carolyn learn to make do and become a good provider for her family? How was Warren Jeffs able to build his fortune? Is it ever appropriate for someone who claims to follow Christ to accumulate wealth?

15. Why do you suppose Carolyn’s daughter, Betty, returned to the FLDS? Why was she more vulnerable to the threat of damnation? Could she become an agent for change within the organization? How is Betty’s rebellious spirit different from her mother’s?

16. How have the FLDS and other cults survived in America, despite widespread media attention? Will this ever change? What are your reasons for this prediction?

17. Education is tightly controlled by the FLDS, another tactic that limits the freedom of women. What led Carolyn to graduate from college, despite constant obstacles?

18. In her memoir’s closing scenes, Carolyn relishes spending time with the man she loves and is thrilled by a simple dinner and a movie. How has her story affected the way you see your own life? What actions are you inspired to take to help other victimized women and children in your community, or elsewhere in the world?