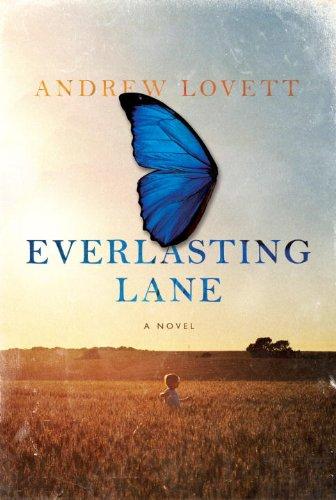 In a timeless coming-of-age tale as charming and haunting as the movie Stand By Me, Andrew Lovett’s Everlasting Lane tells the story of what happens when nine-year-old Peter’s father dies and his mother moves them from the city to a house in the countryside, for what seem to Peter to be mysterious reasons.

He’s soon distracted, though, by the difficulties of being the new, shy kid at school, and he befriends the other two kids who seem to be outcasts: overweight Tommie and too-smart-for-her-own-good Anna-Marie.

In a timeless coming-of-age tale as charming and haunting as the movie Stand By Me, Andrew Lovett’s Everlasting Lane tells the story of what happens when nine-year-old Peter’s father dies and his mother moves them from the city to a house in the countryside, for what seem to Peter to be mysterious reasons.

He’s soon distracted, though, by the difficulties of being the new, shy kid at school, and he befriends the other two kids who seem to be outcasts: overweight Tommie and too-smart-for-her-own-good Anna-Marie. Together they try to weather the storm of bullying teachers and fellow students, by escaping into explorations of the seemingly bucolic countryside.

There, though, they find other outcasts from society such as cranky Mr. Merridew, who won’t leave his cottage in the woods, and Scarecrow Man, who stands in the fields searching the skies. And meanwhile, Peter is disturbed by the growing awareness that his own mother may be some sort of outcast, too—and that she’s hiding something from him in a locked room in the attic, a room she’s expressly forbidden him from entering.

Written in beautiful prose, Everlasting Lane is a captivating, absorbing, and suspenseful evocation of the spells of childhood: sun-soaked, nostalgic, with the soft focus and warm glow of a Polaroid—but it’s darker than it seems. Will Peter and his mother find the light in that darkness?

Andrew Lovett lives near York, England, with his family. Everlasting Lane, which is based in part on his childhood, is his first novel.

“Beautifully written, and as charming as it is dark, the novel unwraps the endless secrets that elude a child.”

“Engrossing… Familial melodrama and confusion are resolved and explained as Lovett’s creative tale broadens into an exploratory, discovery-filled journey for three zany outcasts—’a fluttering rabble of butterflies,’ each taking in the world one revelation at a time.”

“With nods to such children’s classics as Alice in Wonderland, Lovett’s first novel…contemplates the often very fine line between imagination and reality.”

In the beginning of the novel, Doctor Todd gives Peter a watch as a present, to help Peter organize himself. After receiving the watch, Peter destroys it. What might Peter destroying the watch signify? Is this action a reflection of his feelings towards Doctor Todd? Is it something more complicated?

Peter’s mother suggests she and Peter play a game in which Peter pretends she is not actually his mother, but his Aunt “Kat.” She insists he call her “Kat” for the rest of the novel. What might her reasoning be behind this? Do you think it’s directly related to Alice? Explain why, or why not.

Do you feel that Peter calling his mother “Kat” instead of “Mummy,” or “Mother,” changes their relationship? If so, for better or worse?

This is not the only time games are played in order to mask something more serious. Can you think of any other noteworthy examples of times games are played? And why games?

What does Peter learn about the consequences of actions? The notion is first brought up by Anna-Marie in reference to a game. Are consequences a game to Peter? Give a few examples of where consequences play a significant role in the text.

In a general sense, what does Peter learn from The Scarecrow Man? Think about their first few encounters.

When Mr. Merridew says “there is no difference” between a good man and bad man, what is he alluding to? What does Peter learn from this conversation? Please explain.

Memory plays an important role in this narrative. What were the most pivotal moments in this story, where memory changes your understanding of events, or the characters’ (e.g. p. 7, 212, 323)?

Why do you think Peter’s memory specifically, is so hazy and uncertain? Is it because of something significant, or is he simply forgetful?

On page 54, Anna-Marie tells Peter that his “grip on reality seems so…tenuous.” Do you agree? Explain why or why not.

The setting of Everlasting Lane is at once new and familiar to Peter. Do you believe the setting is a largely important aspect of this story? Do you feel it feeds Peter’s unique imagination. Please explain.

How do you read Peter’s relationship with his father? Peter’s father is explored significantly in the novel’s very beginning, and it’s end. Is this an important relationship in the story? If so, explain why.

Throughout the novel, there are moments when Peter is baffled by the adults around him. Sometimes their advice to him is contradictory. What lessons do you think Peter learns from these interactions? To trust grown ups? To only trust himself?