The residents of Haven, Wisconsin, have dined on the Fine Chao restaurant’s delicious Americanized Chinese food for thirty-five years, content to ignore any unsavory whispers about the family owners. Whether or not Big Leo Chao is honest, or his wife, Winnie, is happy, their food tastes good and their three sons earned scholarships to respectable colleges. But when the brothers reunite in Haven, the Chao family’s secrets and simmering resentments erupt at last

The residents of Haven, Wisconsin, have dined on the Fine Chao restaurant’s delicious Americanized Chinese food for thirty-five years, content to ignore any unsavory whispers about the family owners. Whether or not Big Leo Chao is honest, or his wife, Winnie, is happy, their food tastes good and their three sons earned scholarships to respectable colleges. But when the brothers reunite in Haven, the Chao family’s secrets and simmering resentments erupt at last

Before long, brash, charismatic, and tyrannical patriarch Leo is found dead—presumed murdered—and his sons find they’ve drawn the exacting gaze of the entire town. The ensuing trial brings to light potential motives for all three brothers: Dagou, the restaurant’s reckless head chef; Ming, financially successful but personally tortured; and the youngest, gentle but lost college student James. As the spotlight on the brothers tightens—and the family dog meets an unexpected fate—Dagou, Ming, and James must reckon with the legacy of their father’s outsized appetites and their own future survival.

Brimming with heartbreak, comedy, and suspense, The Family Chao offers a kaleidoscopic, highly entertaining portrait of a Chinese American family grappling with the dark undercurrents of a seemingly pleasant small town. 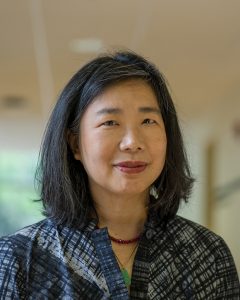 Lan Samantha Chang is the award-winning author of the collection Hunger and the novels The Family Chao, Inheritance and All Is Forgotten, Nothing Is Lost. A recent Berlin Prize Fellow, she also has received grants from the National Endowment for the Arts and the John Simon Guggenheim Foundation. Chang is the first Asian American and the first female director of the Iowa Writers’ Workshop. She lives in Iowa City.

Under Lan Samantha Chang’s mentorship, a new generation of writers has emerged.

When Lan Samantha Chang was appointed director of the Iowa Writers’ Workshop in 2006, she became the first female and the first Asian or non-white person to head the program since its founding in 1936. The four directors who preceded her were all white men, and while it counted among its student and faculty alumnae such renowned writers as Flannery O’Connor, Robert Frost, and Raymond Carver, it had a reputation for insularity.

That began to change under the directorship of Chang’s writing teacher, Frank Conroy, but when Chang took over, her goal, she told O Quarterly, was to “create a more aesthetically, culturally, racially diverse program” in terms of students, faculty, and the kinds of writing considered for acceptance to the program. “I was really interested,” she says, “in finding voices that would reflect our changing country.” One such voice, The Twelve Tribes of Hattie author Ayana Mathis, an Iowa grad and ex-faculty member whose book was a 2012 Oprah’s Book Club selection, told us: “In my cohort in 2009, which was early in Sam’s tenure, there were only three Black women, which was in itself unprecedented then. But by the time I left Iowa as a professor in 2018, the program was a much truer reflection of literature in this country. There were so many Black students from the U.S. and other parts of the world—the Caribbean, Ghana, Botswana, Nigeria, etc.—Latinx students, Asian students. Sam made it her mission to ensure the Workshop drew the best and brightest, which can’t truly happen if only one sort of person is admitted.” Yaa Gyasi, an Iowa alum and author of the novels Homegoing and Transcendent Kingdom, put it this way: “Lan Samantha Chang taught me the importance of being fiercely protective of your writing life, of keeping the work central, even as other things start to make demands. I wouldn’t have finished Homegoing without her.”

Chang also wanted to foster a climate not of competition but of cooperation, which meant leveling the funding process so all students got the same amount of financial support. Previously, the amount of aid students received depended on what faculty thought of their work, but under Chang, that changed. She says that “this was important to free people up to do more innovative work—to write what they really wanted to.” The program began to encompass writers of science fiction and fantasy, and other, more experimental work. “This was necessary,” Chang felt, “because Iowa is the first and in many ways the seminal creative writing program in the country, so it’s essential we reflect not only America’s growing diversity but also the complex mix of writers and cultures that are now our country.”

One of those writers is Chang herself, whose new novel, The Family Chao (Norton), is a harrowing, mysterious, and at times hilarious reimagining of The Brothers Karamazov. In it, a Chinese American restaurateur in Wisconsin is murdered, and one of his sons is accused of the crime.

Chang believes teaching has helped her grow as a writer. For the new book, she says, “I was inspired by my students, freed by the gradual recognition that I no longer had to strictly adhere to all the rules of writing that had been taught to me by my professors.” She says: “There’s a cross-pollination of words and thoughts and ideas that takes place in our community that makes possible the evolution of a literary generation.”