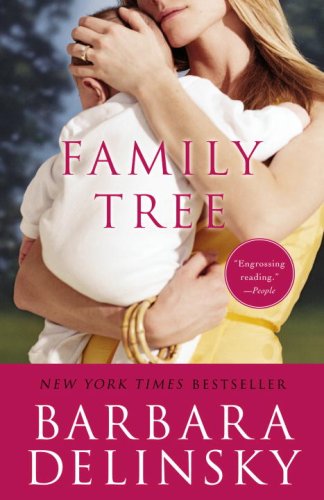 Raising provocative questions about how we define family, how we view ancestry, and whether racism still lurks in even the most open minds, Family Tree offers book clubs a variety of compelling topics to explore.

From beloved, bestselling author Barbara Delinsky, this is the story of Dana and Hugh Clarke, a wealthy, white East Coast couple whose beautiful newborn child clearly has African ancestors.

Dana never knew her father, and her mother died when she was young. Dana had always craved the stability of a home and family,

Raising provocative questions about how we define family, how we view ancestry, and whether racism still lurks in even the most open minds, Family Tree offers book clubs a variety of compelling topics to explore.

From beloved, bestselling author Barbara Delinsky, this is the story of Dana and Hugh Clarke, a wealthy, white East Coast couple whose beautiful newborn child clearly has African ancestors.

Dana never knew her father, and her mother died when she was young. Dana had always craved the stability of a home and family, and she made these dreams come true when she fell in love with Hugh. Unlike Dana, he could trace his ancestors back to the Mayflower. His father even built a successful career as a historian and author, carefully researching the Clarke lineage to the last detail. Or so they thought.

The newest addition to the family, infant Lizzie, raises accusations and doubt among all of her parents’ relatives. To Dana’s dismay, her husband greets the birth of their daughter with alarm and tinges of shame. To Hugh’s dismay, Dana is reluctant to track down her father and isn’t concerned about what people are saying regarding Lizzie’s heritage. As they gradually piece together the facts, a shocking truth emerges that will forever change this family–while opening their eyes to the real meaning of identity and unconditional love.

Barbara Delinsky is the author of more than sixteen New York Times bestselling novels, She was a sociologist and photographer before she began writing. A lifelong New Englander, she and her husband have three sons, two daughters-in-law, and a cat. There are more than twenty million copies of her books in print.

“Full of complex and fascinating family dynamics as its characters are forced to come to terms with issues such as faith, race, and loyalty, Family Tree is thought provoking and memorable. . . . Delinksy will be ‘discovered’ by a new generation of readers.” —Bookpage

“A page-turner that you’ll be discussing with your friends.” —News and Sentinel

What were your initial theories about Lizzie’s ancestors? Did you ever doubt Dana’s fidelity?

Discuss the parallel stories woven throughout the novel, including Dana’s painful reunion with her father, Ellie Jo’s secret regarding her husband’s other marriage, and Crystal’s paternity case against the senator. What are the common threads within these family secrets? What ultimately brings healing to some of the parties involved?

Crystal’s dilemma raises timely questions about the obligations of men who father children out of wedlock. Are Senator Hutchinson’s obligations to Jay the same as Jack Kettyle’s obligations to Dana? Should men always be financially obligated to their children, regardless of the circumstances? If so, what should those financial obligations be?

Why is it so difficult for Dana to feel anything but anger toward her father? In your opinion, did he do anything wrong? How does she cope with the shifting image of her mother?

What is the root of Hugh’s reaction in the novel’s initial chapters? Is he a racist? Is he torn between loyalties? Does he trust his wife?

Is your own ancestry homogenous? If not, what interesting or ironic histories are present in your ancestry? Do you believe it’s important to maintain homogeneity in a family tree? If you were to adopt a child, what would be your main criterion in selecting him or her?

Discuss the many differences between Dana’s and Hugh’s families. What drew Dana and Hugh to each other? To what extent is financial power a factor in shaping their attitudes toward the world? What common ground existed despite their tremendous differences in background?

What accounts for the universal fascination with genealogy? Should a person be lauded for the accomplishments of an ancestor, or snubbed for the misdeeds of one? Is genealogy a predictor?

In chapter 23, Eaton voices his frustration by shouting questions at the portraits of his parents. How might they have responded to his questions had they lived to see the arrival of Lizzie?

What should Dana and Hugh learn from the experience of Ali’s parents? What would the ideal school for Lizzie be like? What does Ali’s story indicate about integration?

Recent developments in DNA mapping have made it possible to discover not only lineage (as was the case for the biracial descendents of Thomas Jefferson) but also many general geographic details about one’s ancestry. If you were to undergo such testing, what revelations would please you? What revelations would disappoint you?

Discuss Eaton’s “reunion” with Saundra Belisle. Were their youths marked by any similarities, despite the fact that they lived in distinctly different worlds?

What role does location play in Family Tree? Would the story have unfolded differently within the aristocracy of the South, or in a West Coast city?

What does Corinne’s story reveal about the false selves we sometimes construct? Who are the most authentic people you know? Who in your life would stand by you after a revelation like Corinne’s?

Consider whether the issues at the center of Family Tree manifest themselves in your life. Is your neighborhood racially integrated? How many people of color hold executive positions at the top companies in your community? Is there a gulf between the ideal and the reality of a color-blind society in 21st–century America?