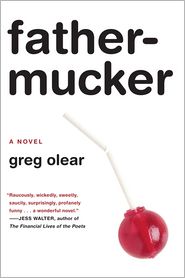 A day in the life of a dad on the brink: Josh Lansky—second-rate screenwriter, fledgling freelancer, and stay-at-home dad of two preschoolers—has held everything together while his wife is away on business . . . until this morning’s playdate, when he finds out through the mommy grapevine that she might be having an affair. What Josh needs is a break. He’s not going to get one.

A day in the life of a dad on the brink: Josh Lansky—second-rate screenwriter, fledgling freelancer, and stay-at-home dad of two preschoolers—has held everything together while his wife is away on business . . . until this morning’s playdate, when he finds out through the mommy grapevine that she might be having an affair. What Josh needs is a break. He’s not going to get one.

Greg Olear is the senior editor of the lit blog The Nervous Breakdown and the author of the novel Totally Killer. His work has appeared in The Rumpus, Babble.com, The Millions, Chronogram, and Hudson Valley Magazine. A professor of creative writing at Manhattanville College, he lives with his family in New Paltz, New York.

“Deft and funny, true and real. If you read one book this year, read this one.”—Molly Jong-Fast, author of The Social Climber’s Handbook

“Fathermucker is witty, realistic, and charming, replete with a father’s genuine love for his family. An entertaining choice for book clubs members of both genders, particularly those with young children.”—Library Journal

“This brilliantly insightful novel explores the trials of modern fatherhood through one hectic day… Littered with hilariously genuine anecdotes, parental pathos, and a hearty dose of pop culture, this clever, comic, and compassionate novel will appeal to fans of Jim Lindberg and Jonathan Evison.”—Booklist

The book is set in New Paltz, a town in upstate New York. What do you make of New Paltz? Why do you think the author chose to set the book there?

Josh frequently applies war metaphors to parenting; he compares raising young children to being in the Flanders trenches, co-sleeping to the war in Iraq, and the distinction of before having kids and after having kids to pre- and post-9/11. He also is fond of equating himself with President Obama. What does this say about Josh? About parenting? Are the metaphors apt?

Discuss your feelings about Josh and Stacy’s relationship in the early pages of the book. Does Josh’s initial reaction to Stacy’s supposed infidelity set the reader up to immediately dislike his wife? How does the author weave empathy for Stacy’s situation as the breadwinner versus Josh’s role as a SAHD? How do your feelings about their relationship change by the end of the book?

The author manages to convey a wistfulness for the time before Josh became a father by using popular music and contemporary celebrity almost as secondary characters. In many ways, Josh’s fantasy life is richer than the tediousness of his reality. Is Josh really unhappy? Or is it natural to have a certain longing for the past?

The author seems to set up a deliberate comparison between Josh and Stacy Lansky and the celebrity couple of Josh Duhamel and Stacy “Fergie” Ferguson. Why does he do this? What is represented by the significance of Us Weekly in Josh’s life?

Josh creates playlists for each of his children, managing their moods (and often his own) with music, especially within the confines of the family minivan. The music Josh chooses sets the mood, sort of his own version of behavior modification. How do you think this choice reflects Josh’s parenting style?

Masculinity is one of the book’s major themes. Josh spends a lot of time thinking about the shift in traditional gender roles vis a vis parenting, and reflecting on how his status as financial dependent impacts his manhood. Do you think he’s successful? What do you make of the sea change in gender roles?

We discover through the course of Josh’s day that Roland’s behavioral issues are more than what they seem. In the pivotal scene that takes place during the trip to the pumpkin patch, Josh’s anger and frustration with Roland’s diagnosis become too much to bear. Josh’s reaction to the scene unfolding expresses the universal helplessness experienced by any parent on a daily basis, but in this case, it is magnified by a child who has real needs. Discuss the author’s treatment of Asperger’s.

Fathermucker is totally Josh Lansky’s story, yet the cast of characters is expansive; there are even two characters whom we never get to meet. How does this work to flesh out the day in the life? How does this infuse the narrative?

One of the pivotal events of Josh’s day occurs when he gets pulled over. What does the police officer represent to Josh? Why do you think the author included this scene?

The title is realized at the very end of the novel; it is the last word in the book. What does the title mean?

Josh is unprepared for the turn of events when Sharon comes calling. Did Josh cheat on Stacy? What constitutes cheating and what doesn’t? Were you disappointed in Josh?