The Life and Art of David Ohannessian

Along the cobbled streets and golden walls of Jerusalem, brilliantly glazed tiles catch the light and beckon the eye. These colorful wares—known as Armenian ceramics—are iconic features of the Holy City. Silently, these works of ceramic art represent a riveting story of resilience and survival.

Feast of Ashes tells the story of David Ohannessian, the renowned ceramicist who in 1919 founded the art of Armenian pottery in Jerusalem, where his work and that of his followers is now celebrated as a local treasure. Ohannessian’s life encompassed some of the most tumultuous upheavals of the modern Middle East.

Along the cobbled streets and golden walls of Jerusalem, brilliantly glazed tiles catch the light and beckon the eye. These colorful wares—known as Armenian ceramics—are iconic features of the Holy City. Silently, these works of ceramic art represent a riveting story of resilience and survival.

Feast of Ashes tells the story of David Ohannessian, the renowned ceramicist who in 1919 founded the art of Armenian pottery in Jerusalem, where his work and that of his followers is now celebrated as a local treasure. Ohannessian’s life encompassed some of the most tumultuous upheavals of the modern Middle East. Born in an isolated Anatolian mountain village, he witnessed the rise of violent nationalism in the waning years of the Ottoman Empire, endured arrest and deportation in the Armenian Genocide, founded a new ceramics tradition in Jerusalem under the British Mandate, and spent his final years, uprooted, in Cairo and Beirut.

Ohannessian’s life story is revealed by his granddaughter Sato Moughalian, weaving together family narratives with newly unearthed archival findings. Witnessing her personal quest for the man she never met, we come to understand a universal story of migration, survival, and hope. 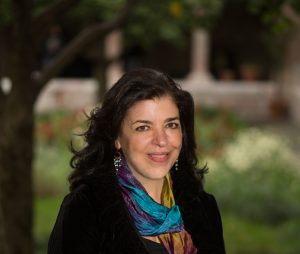 Sato Moughalian is an award-winning flutist in New York City and Artistic Director of Perspectives Ensemble. Since 2007, Ms. Moughalian has also traveled to Turkey, England, Israel, Palestine, and France to uncover the traces of her grandfather’s life and work, has published articles, and gives talks on the genesis of Jerusalem’s Armenian ceramic art.

“Feast of Ashes is a passionate journey of discovery, an exemplary work of craft and design history, and a powerful narrative of the meaning of family identity. An extraordinary book—I loved it.” —Edmund de Waal, author of The Hare with Amber Eyes

1. Before reading Feast of Ashes, had you heard of the ceramicist David Ohannessian? Were you familiar with the ceramic tile art of Jerusalem?

2. The author relied heavily on her mother’s transcriptions of family oral histories to research and write Feast of Ashes. Does your own family have a tradition of sharing stories from older generations, or passing stories on to the next generation?

3. What impact did Tavit’s family’s move from the remote mountain village of Mouradchai to the city of Eskishehir have on his upbringing? Have you had similar experiences, in which moving to a new place or environment opened up new possibilities for you?

4. How did Tavit’s job as an assistant to the largest egg merchant and exporter in Eskishehir broaden his exposure to art and culture?

5. During Tavit’s years of ceramics training in the late 19th century, tourists commonly visited ateliers to observe artists at work. Have you ever had the opportunity to watch a master artist (e.g., glassblower, woodworker, or painter) create a piece of art? If so, describe your experience.

6. In spite of the ongoing governmental upheavals across Ottoman lands near the turn of the 19th century, how did restoration programs and the new regime affect architecture and the ceramics industry?

7. Why was Tavit and his family exiled from Kutahya after Tavit made the painful decision to renounce his Christian identity and accept Islam?

8. There are many images of tiles panels and ceramics throughout the book. Which one is your favorite, and why?

9. Throughout Feast of Ashes, how does Tavit utilize his resourcefulness and relentless drive to keep both his family and the Armenian ceramics tradition alive in Jerusalem and beyond?

10. The author conducted extensive research and traveled far to better understand her family’s history. Have you conducted any research of your own to learn more about your family’s past?

IN THE SUMMER OF 1889, five-year-old Tavit Galenbajak—who would one day be known as David Ohannessian—loved nothing more than scampering about the hills and bluffs perched above the Armenian village of Mouradchai, an idyllic place hidden away in the mountains of northwest Anatolia. On this hot, dry afternoon, he ran up the path behind his house, past pomegranate and apricot trees. His small bare feet flew through sloping fields and skittered up the stony crags.

Several boulders rose to form a ledge above the houses where the Galenbajak family and their relatives lived. The boy took an impish delight in finding wobbly rocks. He clambered up onto the unsteadiest of them—his favorite. Tavit carefully balanced himself, then jumped up and down in a frenzy, unleashing a hailstorm of pebbles toward the houses below.

His mother, Markrid, and his grandmother Takouhi, placidly tending to their daily tasks of sweeping, spinning, chopping, and grinding, heard him at his chosen sport. They ran toward Tavit and let out a collective wail, convinced yet again that the whole mountain would soon come crashing down on them and their houses. “Aye, Tavit, Tavit,” they pleaded. “Come down! You’ll destroy our whole village yet!”

Mouradchai faced west, toward the setting sun. Fragrant, pine-covered hills crowned with soaring limestone peaks enclosed the lofty village on three sides, shielding it from an outsider’s view. Down below the village, the Chirka Creek had eroded a cleft into the mountain rock and brought fresh water close to the settlement. The Chirka was a northern tributary of the five-hundred-mile-long Sakarya River, which snaked a path around western Anatolia before spilling into the Black Sea.

Few maps recorded Mouradchai’s existence. Tavit’s ancestors had discovered this verdant, alpine spot at the end of the fifteenth century. They had traveled from the eastern reaches of the Ottoman Empire—historic Armenia—seeking refuge from marauding tribesmen and soldiers who had plundered their settlements.1 The migrants named the new colony after their former home on the banks of the Mourad River—the Mourad-Chai—whose waters flowed from Mount Ararat and formed the source of the mighty Euphrates River.2

Tavit’s father, Ohannes, narrated this history and many others as the family drew close around the hearth on frigid winter nights. Mouradchai villagers—all of them Armenian—taught their customs and stories to each generation of children—the time-honored rituals of ecclesiastic and family life that had stood them in good stead. At the same time, Tavit’s parents and grandparents didn’t shrink from recounting the family’s hardships and woes—the challenges they had borne and those they had overcome. After all, for nearly four hundred years now the Galenbajak family had persisted and flourished, sheltered high away on the Mourad Rock.

Twenty-one wood-frame and mud-brick houses of one or two stories crowded together in the Galenbajak district.5 Beyond the tight cluster of homes, chickens, sheep, and cows grazed among orchards dotted with fruit and nut trees—fig, apricot, olive, almond, cherry, walnut, and hazelnut. Wheat, alfalfa, and vegetables thrived in the rich soil. Silk cocoons and grapes formed the village’s largest exports. Mouradchai men and women were industrious farmers, planting rows of grapevines in the fertile fields within the town. But they also cultivated every arable patch of dirt, no matter how small, outside the ring of mountains, in the stony lands between the village and the Sakarya River.6

Like Tavit’s father, Ohannes, his grandmother Takouhi enchanted the family with her storytelling. On long brumal nights, she let her grandchildren choose which stories they wanted to hear. One of their favorites was the tale of how she came to Mouradchai as a girl.

One summer, in the 1840s, her father, Haji Missak Geuzumian,7 a prosperous goldsmith who lived in the nearest metropolis, Eskishehir, arrived in the village with his wife and children, including his eldest daughter, Takouhi. Haji Missak rented a house for several months so that he could make and sell jewelry to order—bracelets, rings, crosses, and chains. With nearly three thousand inhabitants,8 Mouradchai provided a good demand for his services, including many orders to supply gold coins. All throughout the broad Anatolian peninsula, both foreign and local coins circulated freely. Paper banknotes had recently been issued for the first time but few used them outside of large cities and at any rate,9 in the provinces, Armenian families preferred to keep their riches in gold. Golden rings, crosses, belts, and, naturally, coins and gold nuggets could be hidden or transported easily. When a young girl married, she wore the better part of her dowry draped across her forehead or pinned to her bridal dress in the form of gold coins.

Before too long, the Geuzumians, the parents of five daughters, noticed the Galenbajak’s son Hagop. Around the village, he was considered a very good catch. In Mouradchai, the rumor was that the great Galenbajak clan had so much gold it had to be measured by the bucket. And pretty Takouhi caught Hagop’s eye. The Geuzumians consulted a meechnort, a go-between, who made the initial approach.

Both families felt it was a good match and quickly settled an engagement between Takouhi and Hagop. The first step of a betrothal was the khosk gab, or “tying of the word,” which celebrated the new relationship between the young couple and their kin. Then, a clergyman performed the ritual consecration called the nshan or “sign.” Hagop and Takouhi, her head draped with a veil, touched foreheads while holding lighted candles, as a Galenbajak uncle lifted a cross above their heads. Hagop’s parents presented a gold ring to Takouhi, to be worn on her right hand until the wedding day. After the nshan, the guests gave gifts to the bride and feasted on great mounds of sweets—rojig, walnuts tied together on a long string and dipped in grape syrup, bastekh, thin sheets of dried fruit juices, and trays of nut-filled pastries.

Some village families betrothed their children from birth, others when a daughter reached the age of 9 or 10. But Takouhi was at the right age to marry—between 14 and 16—and Hagop was several years older, so they soon wed. The bride wore a colorful dress bedecked with gold coins and covered her face with a thick shawl as she rode to the church on horseback. Village men escorted the bridal party, playing ear-crashing fanfares on davul drums and zurnas, trumpet-like reed instruments. Young men and women danced all along the way to the church. Others fired celebratory gunshots into the air.10