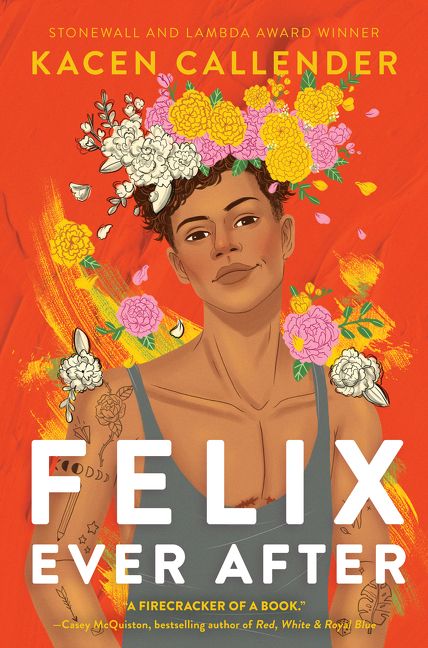 From Stonewall and Lambda Award–winning author Kacen Callender comes a revelatory YA novel about a transgender teen grappling with identity and self-discovery while falling in love for the first time.

Felix Love has never been in love—and, yes, he’s painfully aware of the irony. He desperately wants to know what it’s like and why it seems so easy for everyone but him to find someone. What’s worse is that, even though he is proud of his identity, Felix also secretly fears that he’s one marginalization too many—Black, queer, and transgender—to ever get his own happily-ever-after.

From Stonewall and Lambda Award–winning author Kacen Callender comes a revelatory YA novel about a transgender teen grappling with identity and self-discovery while falling in love for the first time.

Felix Love has never been in love—and, yes, he’s painfully aware of the irony. He desperately wants to know what it’s like and why it seems so easy for everyone but him to find someone. What’s worse is that, even though he is proud of his identity, Felix also secretly fears that he’s one marginalization too many—Black, queer, and transgender—to ever get his own happily-ever-after.

When an anonymous student begins sending him transphobic messages—after publicly posting Felix’s deadname alongside images of him before he transitioned—Felix comes up with a plan for revenge. What he didn’t count on: his catfish scenario landing him in a quasi–love triangle….

But as he navigates his complicated feelings, Felix begins a journey of questioning and self-discovery that helps redefine his most important relationship: how he feels about himself.

Felix Ever After is an honest and layered story about identity, falling in love, and recognizing the love you deserve. 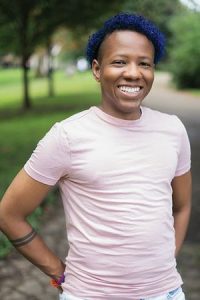 Kacen Callender is originally from Saint Thomas in the US Virgin Islands. Kacen has a BA from Sarah Lawrence College and an MFA from the New School’s writing for children program. They are also the author of the young adult novel This Is Kind of an Epic Love Story and the middle grade novel Hurricane Child, winner of the Stonewall Book Award and Lambda Literary Award.

“Felix is like the story itself—boldly empathic, hopeful, and full of love. This top-notch depiction of a messy, complicated, romantic young artist navigating the bumpy road to self-love and self-determination sticks its landing at every turn.”  – Publishers Weekly (starred review)

“From its stunning cover art to the rich, messy, nuanced narrative at its heart, this is an unforgettable story of friendship, heartbreak, forgiveness, and self-discovery, crafted by an author whose obvious respect for teen readers radiates from every page.” – ALA Booklist (starred review)

“Felix explores love, friendship, and possibly retribution in this powerful #OwnVoices story of identity and self-worth… Full of warmth, love, and support, this is an important story and an essential purchase.” – School Library Journal (starred review)

“Full of nuanced looks at how relationships can be both toxic and supportive, loving and confusing, and exciting but brief, this is definitely not a book to be missed.” – Buzzfeed

“An intricate love story for the ages.” – CNN Underscored

“Felix is an open, warm, engaging character who extends far off the page. He’s easy to relate to regardless of reader identity, which makes this book a great candidate for school libraries and summer book report lists.” – them.

1. When the Instagram troll starts sending Felix transphobic messages, Felix responds by saying “you [don’t] get to say who I am and who I’m not. You don’t have that power. Only I [do]” (pg. 144). Why is this true? What parts of ourselves do only we have the power to define? How does this power relate to other areas of Felix’s identity and sense of self where others’ views seem to matter more—the quality of his art, getting into Brown, being lovable?

2. Felix has a complicated relationship with his parents. His dad has made efforts to support Felix’s transition and art aspirations, yet he won’t use Felix’s name and even deadnames him sometimes. Felix’s mother is entirely absent, having left Felix behind for a new life and family, but Felix writes her hundreds of unsent emails about the very things he cannot talk about with anyone else. How do you see Felix’s parents or his relationship with them impacting his choices and the way he sees himself? What about other characters and their parents? How do parents or parental figures influence you and how you make decisions?

3. What role do money and wealth—both access to it and lack of it—play in the novel? Felix calls out both friends and enemies on the privilege that wealth affords them; he tells Ezra that he’s wasting the opportunities that wealth and talent afford him, and he tells Declan that he is selfish to apply for a scholarship when he already has money. Do you agree with Felix? How might Felix’s angst about worthiness connect to money and class?

4. What are some of the ways it appears in the novel? What are some of Felix’s communities? Does he feel like he belongs in all of them? Why or why not? Think about the communities in your own life. Did you choose to be a part of them? What impact do they have on you? What does it mean for a community to be supportive?

5. When the group is discussing their sexual identities, Ezra says he doesn’t care much about labels but acknowledges that they might be important to others. He wonders “if there were no straight people, no violence or abuse or homophobia or anything, would we even need labels…?” (pg. 81) What do labels offer people in the face of discrimination and violence? Why might they matter? What are some of the labels that feature in the book, and why are they important for Felix and other characters? How do you use labels in your own life? Which are the most important to you and why?

WE PUSH OPEN THE APARTMENT BUILDING’S GLASS DOOR, out into the yellow sunshine that’s a little too cheerful and bright. It’s hot as hell—the kind of heat that sticks to your skin, your hair, your freaking eyeballs.

“Christ, why did we sign up for this again?” Ezra says, his voice hoarse. “It’s so early. I could still be asleep.”

Ezra lights a blunt he pulls out of I-don’t-know-where and offers it to me, and we suck on the last of it as we walk. Reggaeton blasts from a nearby park’s cookout. The smell of smoke and burning meat wafts over, along with the laughter and screams of kids. We cross the street, pausing when a man on a bike zooms by with a boom box blasting Biggie, and we walk down the mold-slick stairs of the Bedford-Nostrand G stop, sliding our cards through the turnstile just as a train rumbles up to the platform.

The train doors slide shut behind us. It’s one of the older trains, with splotches of black gum plastered to the floor and messages written in Sharpie on the windows. R + J = 4EVA.

My first instinct is to roll my eyes, but if I’m honest with myself, I can feel jealousy sprouting in my chest. What does it feel like, to love someone so much that you’re willing to publicly bare your heart and soul with a black Sharpie? What is it like to even love someone at all? My name is Felix Love, but I’ve never actually been in love. I don’t know. The irony actually kind of fucks with my head sometimes.

We grab a couple of orange seats. Ezra wipes a hand over his face as he yawns, leaning against my shoulder. It was my birthday last week, and we got into the habit of staying up until three in the morning and lying around all day. I’m seventeen now, and I can confirm that there isn’t much of a difference between sixteen and seventeen. Seventeen is just one of those in-between years, easily forgotten, like a Tuesday—stuck in between sweet sixteen and legal eighteen.

An older man dozes across from us. A woman stands with her baby stroller that’s filled with grocery bags. A hipster with a huge red beard holds his bicycle steady. The AC is blasting. Ezra sees me clutching myself against the ice-cold air, so he puts an arm over my shoulders. He’s my best friend—only friend, since I started at St. Catherine’s three years ago. We’re not together like that, not in any way, shape, or form, but everyone else always gets the wrong idea. The older man suddenly wakes up like he could smell the gay, and he doesn’t stop staring at us, even after I stare right back at him. The hipster gives us a reassuring smile. Two gay guys cuddling in the heart of Brooklyn shouldn’t feel this revolutionary, but suddenly, it does.

Maybe it’s the weed, or maybe it’s the fact that I’m that much closer to being an adult, but I suddenly feel a little reckless. I whisper to Ez, “Wanna give this guy a show?”

I nod in the direction of the older man who has straight-up refused to look away. Ezra smirks and rubs his hand up and down my arm, and I snuggle closer to him, resting my head on his shoulder—and then Ez goes from zero to one hundred as he buries his face into my neck, which—okay—I’ve never actually gotten a whole lot of action before (i.e.: I’ve never even been kissed), and just feeling his mouth there kind of drives me crazy. I let out an embarrassing squeak-gasp, and Ezra puffs out a muffled laugh against the same damn spot.

I look up to see our audience staring, wide-eyed, totally scandalized. I wiggle my fingers at the man in a sarcastic half wave, but he must take that as an invitation to speak. “You know,” he goes, with a slight accent, “I have a grandson who’s gay.”

Ezra and I glance at each other with raised eyebrows.

The man nods. “Yes, yes—I never knew, and then one day he sat me down, and my wife, Betsy, before she passed, and then he was crying, and he told us: I’m gay. He’d already known for years, but he didn’t say anything because he was so afraid of what we would think. I can’t blame him for being afraid. The stories you hear. And his own father . . . Heartbreaking. You’d think a parent would always love their child, no matter what.” He pauses in his monologue, looking around as the train begins to slow down. “Anyway. This is my stop.”

He stands as the doors open. “You would like my grandson, I think. You two seem like very nice, gay boys.”

And with that, the man is lost to the platform as the woman with the baby stroller follows him out.

Ezra and I look at each other, and I burst out laughing. He shakes his head. “New York, man,” he says. “Seriously. Only in New York.”