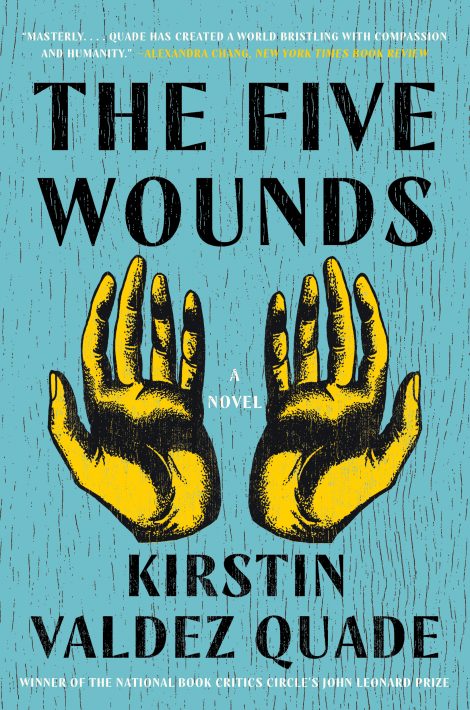 It’s Holy Week in the small town of Las Penas, New Mexico, and thirty-three-year-old unemployed Amadeo Padilla has been given the part of Jesus in the Good Friday procession. He is preparing feverishly for this role when his fifteen-year-old daughter Angel shows up pregnant on his doorstep and disrupts his plans for personal redemption. With weeks to go until her due date, tough, ebullient Angel has fled her mother’s house, setting her life on a startling new path.

It’s Holy Week in the small town of Las Penas, New Mexico, and thirty-three-year-old unemployed Amadeo Padilla has been given the part of Jesus in the Good Friday procession. He is preparing feverishly for this role when his fifteen-year-old daughter Angel shows up pregnant on his doorstep and disrupts his plans for personal redemption. With weeks to go until her due date, tough, ebullient Angel has fled her mother’s house, setting her life on a startling new path.

Vivid, tender, funny, and beautifully rendered, The Five Wounds spans the baby’s first year as five generations of the Padilla family converge: Amadeo’s mother, Yolanda, reeling from a recent discovery; Angel’s mother, Marissa, whom Angel isn’t speaking to; and disapproving Tíve, Yolanda’s uncle and keeper of the family’s history. Each brings expectations that Amadeo, who often solves his problems with a beer in his hand, doesn’t think he can live up to.

The Five Wounds is a miraculous debut novel from a writer whose stories have been hailed as “legitimate masterpieces” (New York Times). Kirstin Valdez Quade conjures characters that will linger long after the final page, bringing to life their struggles to parent children they may not be equipped to save. 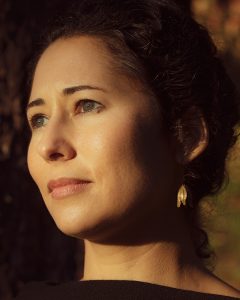 Kirstin Valdez Quade is the author of Night at the Fiestas, winner of the National Book Critics Circle’s John Leonard Prize. The recipient of a “5 Under 35” award from the National Book Foundation, she teaches at Princeton University and lives in New Jersey.

“You hold in your hands a small, complete universe vibrating with joy and grief, humor and absurdity and delight. All the fabulous mess of humanity is, somehow, in these pages. The Five Wounds is bighearted, tender, wise, and shot through with moments of pure grace.”–C Pam Zhang, author of How Much of These Hills Is Gold

“With beautifully layered relationships and an honest yet profoundly empathetic picture of a rural community—where the families proudly trace their roots back to the Spanish conquistadors while struggling with poverty and a deadly drug epidemic—this novel is a brilliant meditation on love and redemption. Perfectly rendered characters anchor a novel built around a fierce, flawed, and loving family.”—Kirkus Reviews (starred review)

1. Kirstin Valdez Quade’s The Five Wounds is written from four different points of view. Why do you think we hear from these particular characters? Was there a character you felt particularly drawn to? Why?

2. At the beginning of the novel Amadeo is resentful of his daughter Angel’s arrival, thinking his mind should “be trained on sacrifice and resurrection” (p. 4) as he prepares for his role as Jesus in the Good Friday procession, a performance that Amadeo believes will redeem him. Over the course of the novel, in what ways does Amadeo come to recognize the redemption that is possible through fatherhood itself?

3. The iconography and performances of Catholicism are poignant symbols within the novel. Were these symbols meaningful for you? What are the differences in how the point-of-view characters engage with questions of faith? Why do you think Quade chose to structure the novel around the liturgical calendar, with sections titled Semana Santa, Ordinary Time, and Lent?

4. Were you sympathetic to Yolanda’s desire to keep the truth of her diagnosis from her family for as long as possible?

5. For Angel, Brianna and Smart Starts! are a lifeline, much like Tío Tíve and the hermandad are for Amadeo. What do these communities offer Angel and Amadeo? What are their limitations? Have there been teachers or extended family members who had a powerful impact on the course of your own life?

6. The characters in this novel are flawed and sometimes make wretched choices. Did you feel empathy for the characters, despite their choices? If so, what made you root for them? Did any of your emotional responses to the characters surprise you?

7. Despite how much she misses her mother, Angel is resistant to Marissa’s overtures of reconciliation, even when she learns that her mother has kicked Mike out. Why do you think this is?

8. Yolanda and Angel are at opposite stages of life, but what similarities do they share? Were you surprised by the parallels of caretaking and mothering at the beginning of life and the end of life? Did you sympathize with their individual insistence on keeping Cal and Ryan at arm’s length, despite both men being loving and loyal? Why do you think they did that?

9. Angel picks up on Brianna’s inherent dislike of Lizette and struggles with the injustice of her apathy. “There were a million moments when events might have unfolded differently for Lizette, when a word, a gesture, a smile from a caring adult might have changed her course” (p. 409). Do you agree with Angel that more care and connection from Brianna or another adult would have made a difference? What are our responsibilities to the people around us? Can you think of moments in your own life when the care or lack of care from another person changed the course of your life?

10. Northern New Mexico is almost a character in itself in this novel—starkly beautiful but ravaged by addiction and lack of opportunity. “All this beauty. Also underfunded public schools, dry winters, a falling water table, shitty job prospects. Mostly what people have now is cheap heroin” (p. 19). Are there similar circumstances in your own community? How has reading this novel changed or challenged your assumptions about people living in towns like Las Penas?

11. What did you make of the relationship between Brianna and Amadeo? Were you surprised by Brianna’s reaction to Angel’s response after she learns about it? What do you think is behind her reaction?

12. Addiction, repressed sexuality, violence, and teen pregnancy are repeating cycles within the novel. “[Yolanda] thinks of that first man, a conquistador, here in this dry new land for the purpose of domination and annihilation, yanking on the arm of his newly christened Indian wife, and from that union a son was born. Generations of injury chewed like blight into the leaves of the family tree: shaken skulls, knocking teeth, snapped wrists, collisions and brawls and fatal intoxication” (p. 80). In what ways do you see generational trauma at play in the lives of the Padilla family? How might these old injuries begin to be healed?

13. Do you see any symbolism in the recurring image of the coyote on the road at night?

14. “This thing Amadeo did is too terrible and too large for them to deal with. He understands that it will remain with him—and with Angel and Marissa, too—forever. Trotting along his life will run a ghost life, a life in which Connor is killed on this night” (p. 404). What did you think about Marissa and Angel lying to protect Amadeo in the hospital after the car crash?

15. The themes of redemption and forgiveness are at the core of this novel. While no one’s journey is without blind turns and circuitous loops, do you think Amadeo, Yolanda, and Angel ultimately find redemption? Why or why not?