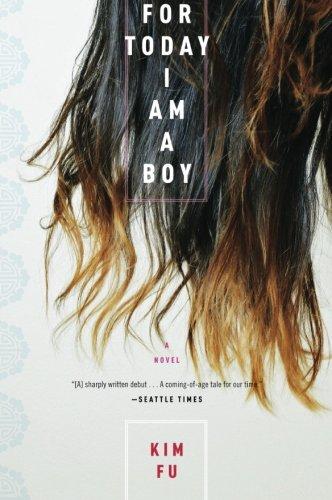 FOR TODAY I AM A BOY

Chinese sisters, one of whom happens

At birth, Peter Huang is given the Chinese name

settled in small-town Ontario, he is the exalted

only son in a sea of daughters, the one who will finally fulfill his immigrant

Chinese sisters, one of whom happens

At birth, Peter Huang is given the Chinese name

settled in small-town Ontario, he is the exalted

only son in a sea of daughters, the one who will finally fulfill his immigrant

father’s dreams of Western masculinity. Peter and his sisters grow up in

an airless house of order and obligation, though secrets and half-truths

simmer beneath the surface. At the first opportunity, each of the girls

lights out on her own. But for Peter, escape is not as simple as fleeing his

parents’ home. Though his father crowned him “powerful king,” Peter

knows otherwise. He knows he is really a girl. With the help of his far-flung

sisters and the sympathetic souls he finds along the way, Peter inches ever

closer to his own life, his own skin, in this darkly funny, emotionally acute,

arts degree from the University of British Columbia. She lives in Seattle.

“Sensitively wrought . . . For Today I Am a Boy is as much about the construction

of self as the consequences of its unwitting destruction—and what

happens when its acceptance seems as foreign as another country.”—New

“Subtle and controlled, with flashes of humor and warmth.”—Slate

“Keeps you reading. Told in snatches of memory that hurt so much they

have the ring of truth.”—Bust magazine

Antony and the Johnsons: “One day I’ll grow up, I’ll be a

beautiful woman. One day I’ll grow up, I’ll be a beautiful

What questions does this quotation evoke? Does the

reference lend nuances to the title?

Peter grows up associating with boys like Roger and Ollie, who are

rough, physical, and crude. In one powerful incident Peter is pushed

by Roger and Ollie to attack a young girl. When Peter returns home,

his mother slaps him, yet his father smiles and tells him he will have

his own room. How does Peter handle these mixed messages?

There’s not much interaction between Peter and his father, yet when

interaction does occur, it provides powerful messages about men and

when he refers to “women’s work.” What do these moments create for

woman. Peter fixates on the conversation between Chef and Simon.

With whose perspective about this episode do you agree? Do you

think it’s wrong of people to deceive others about such matters? Why?

After finding some friends who seem to understand and support his

situation, Peter begins to experience life as a woman. He dances with

a man during a Halloween party, yet part of him will not let go of his

plight: “It’s Halloween, it’s just a game, it isn’t real.” What is it that Peter

Eileen provides the final catalyst for Peter. “You don’t have to look like

Do you agree with her? What does it mean to be a woman? How has

society defined what it means to be a woman?

Peter says that he “could not pin down what would be enough, other

than resetting time, going back before my birth, before my conception,

and finding a way to choose” (115). Has Peter found peace and