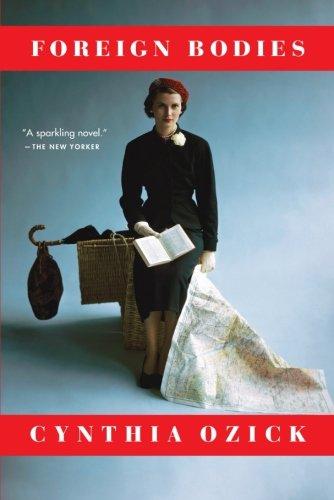 Cynthia Ozick is one of America’s literary treasures. For her sixth novel, she set herself a brilliant challenge: to retell the story of Henry James’s The Ambassadors—the work he considered his best—but as a photographic negative, that is the plot is the same, the meaning is reversed. At the core of the story is Bea Nightingale, a fiftyish divorced schoolteacher whose life has been on hold during the many years since her brief marriage. When her estranged, difficult brother asks her to leave New York for Paris to retrieve a nephew she barely knows, she becomes entangled in the lives of her brother’s family and even,

Cynthia Ozick is one of America’s literary treasures. For her sixth novel, she set herself a brilliant challenge: to retell the story of Henry James’s The Ambassadors—the work he considered his best—but as a photographic negative, that is the plot is the same, the meaning is reversed. At the core of the story is Bea Nightingale, a fiftyish divorced schoolteacher whose life has been on hold during the many years since her brief marriage. When her estranged, difficult brother asks her to leave New York for Paris to retrieve a nephew she barely knows, she becomes entangled in the lives of her brother’s family and even, after so long, her ex-husband. Every one of them is irrevocably changed by the events of just a few months in that fateful year.

Traveling from New York to Paris to Hollywood, aiding and abetting her nephew and niece while waging a war of letters with her brother, facing her ex-husband and finally shaking off his lingering sneers from decades past, Bea Nightingale is a newly liberated divorcee who inadvertently wreaks havoc on the very people she tries to help.

Foreign Bodies may be Cynthia Ozick’s greatest and most virtuosic novel of all, as it transforms Henry James’s prototype into a brilliant, utterly original, new American classic.

Cynthia Ozick is the author of numerous acclaimed works of fiction and nonfiction. She is a recipient of the National Book Critics Circle Award and was a finalist for the Pulitzer Prize and the Man Booker International Prize. Her stories have won four O. Henry first prizes

“Ozick’s heady fiction springs from her deep critical involvement in literature, especially her fascination with Henry James, which emboldened her to lift the plot of his masterpiece, The Ambassadors, and recast it in a taut and flaying novel that is utterly her own….Ozick’s dramatic inquiry into the malignance of betrayal; exile literal and emotional; the many tentacles of anti-Semitism; and the balm and aberrance of artistic obsession is brilliantly nuanced and profoundly disquieting.”
—Booklist, starred review

“Cynthia Ozick is one of America’s greatest living writers… The “leaving” — of parents, of a spouse, of a child, of a family, of a country, of a continent, of all we thought our lives were for — follows every character through this brilliant story of how we mark others without knowing it, revealing how we are all tattooed by other people’s ambitions.”
—Dara Horn, The Forward

“…her vision of Europe and its tragic history is profound; and Lili is a creation of stunning depth. It is not Jamesian, it is Ozickian.”—Richard Eder, Boston Globe

“This is vintage Ozick; she is, perhaps, our most classical contemporary novelist, with a strong sense of literary heritage.”—LA Times

Foreign Bodies is described as a “photographic negative” of Henry James’s classic novel The Ambassadors; in the New York Times, Charles McGrath described the similarities between the two books as “like someone pulling a glove inside-out.” How does Ozick achieve this?  What do you think might have been her motivation? And what do you think of re-writing a classic American novel?

Foreign Bodies begins in 1952; the war has ravaged Europe, and displaced persons (DP’s) struggle to find new homes outside of their devastated countries.  James’s book was written in 1903, before even the hint of the First World War.  Describe how the relationship between the US and Europe changed in the fifty years between James’s novel and the setting of Foreign Bodies, and then the next fifty years, between when Foreign Bodies was set and when it was written.

Each of the characters in the book has a different relationship to Europe.  What is Marvin’s relationship to Europe, or what he imagines of Europe?  Bea is a teacher, a lover of literature and art; what does she see in Europe?  What about Julian, a sensitive but feckless young man?  And Lili, a character who can be seen as a true victim of Europe?  Do you feel that any of these characters’ ideas hold more truth than others?

Reread Ozick’s descriptions of the two types of visitors to Paris on pages 2–3. Then discuss Julian and Lili as each representing one of these types, and their relationship; what does each see in the other? How do other characters see them? Bea says about Julian, “A boy with a wife was a man, and a man with a wife could not be left to drown” (p. 81).  How does Lili help make Julian a man? How does Lili’s presence affect how Bea deals with Julian?

Lili’s co-worker Kleinman reveals he’s planning to move to Texas. How do the European characters view the United States?  Are their ideas accurate?

Bea’s role as “ambassador” is reluctant and ineffective, at first; she repeatedly fails to accomplish the tasks she undertakes for Marvin. But she is not powerless. Discuss the ways that Bea affects change in the book, in both her own life and in the lives of other characters. Are these changes always for the better?

Repeatedly throughout the book, we are reminded that Bea Nightingale changed her name from Nachtigall, whereas the much more self-hating Marvin kept his name. Describe these characters’ relationships to their Jewishness.  How do their senses of themselves as Jewish or not-Jewish inform their actions in the book? One of Julian’s poems describes the DP’s in Paris as “pigeons in the Marais.” What is Julian’s relationship to his Jewishness?

What is the role of art in Bea’s life? She married a musician at a young age; how did she see herself, and what were her ideas for her own life, when she met Leo Coopersmith? She told him she wanted to write a dictionary of clouds, a catalog of things impermanent and changeable; she said she wanted to make her mark. How did Bea’s ideas for her life change?  By the end of the book, have they changed again?

What role do the two grand pianos play in the book? When Iris taps one of the keys of the piano in Bea’s apartment, what does she set in motion? That one note from Iris has its counterpart with another scene later in the book. What does that scene set into motion?

The tug between art versus science, and the life of the mind versus business, come up throughout the book. When do you see this conflict arise between the different couples, and in other relationships, in the book?

The novel is, in part, epistolary. How do these letters function in the book? How do we get to know the characters through them? In Bea’s letters, we see her prevarications and her evasions; how does the knowledge of Bea’s deceitfulness affect how we see her? Margaret dies with a letter from Bea in her pocket; what did the letter say? What did the letter reveal to Marvin? Is Bea at all responsible for Margaret’s death?

The figure of Margaret Nachtigall (née Breckinridge) in her “rest home” conjures the trope of “the madwoman in the attic”—a figure whose presence in 19th century fiction represented the male writer’s fear of an “untamed” women and his need to keep her locked away from the rest of his world.  Had Margaret come to threaten Marvin?  On page 91, Ozick writes “The mild madwoman mildly incarcerated was all at once taking on a kind of sanity; it swept over Bea that it was the sanity of illumination.” What does Bea come to understand about Margaret in this scene?  Is Margaret truly mad?

What do the physical descriptions of these characters tell us about them? How do their sexualities inform who they are?

The book ends with Leo sending Bea the score of his symphony, “The Nightingale’s Thorn, Symphony in B Minor,” which Bea reads as “Bea Minor.” Are we meant to feel that this symphony is Leo’s masterwork? An act of revenge? What do you make of the novel’s last line: “Even so, in the long, long war with Leo, wasn’t it Bea who’d won?” Do you think Bea won?  Won what?

Who are the “foreign bodies” of the title?