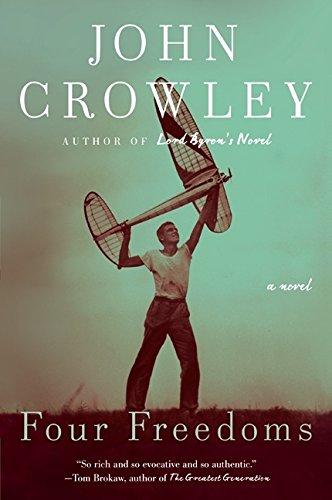 In the early years of the 1940s, as the nation’s young men ship off to combat, a city springs up, seemingly overnight in the fields of Oklahoma: the Van Damme airplane factory, a gargantuan complex dedicated to the construction of the necessary machinery of warfare. Laborers—mostly women—flock to this place, enticed by the opportunity to be something more than wife and homemaker. For Vi, fleeing a dying ranch; for Connie, following an unfaithful husband; for Diane, leaving behind the hot music and soldier boys to pursue something different, adult, and real; their journeys will be liberating in ways they couldn’t previously imagine,

In the early years of the 1940s, as the nation’s young men ship off to combat, a city springs up, seemingly overnight in the fields of Oklahoma: the Van Damme airplane factory, a gargantuan complex dedicated to the construction of the necessary machinery of warfare. Laborers—mostly women—flock to this place, enticed by the opportunity to be something more than wife and homemaker. For Vi, fleeing a dying ranch; for Connie, following an unfaithful husband; for Diane, leaving behind the hot music and soldier boys to pursue something different, adult, and real; their journeys will be liberating in ways they couldn’t previously imagine, and it will lead each of them to Prosper Olander—disabled artist, forger, friend, lover, and the true heart and soul of the temporary city—who will change their lives in profound and unexpected ways.

John Crowley lives in the hills above the Connecticut River in northern Massachusetts with his wife and twin daughters. He is the author of Daemonomania ; Love & Sleep ; Aegypt ; Little, Big ; The Translator, Novelties & Souvenirs; Lord Byron’s Novel; and Four Freedoms.

“John Crowley is a virtuoso of metaphor, a peerless recreator of living moments, of small daily sublimities. And his latest novel, Four Freedoms, is in many ways his most unguarded and imaginative work…. And it’s brilliantly stitched together by motifs of chrysalises and movies and by a joyous abundance of metaphor and similie. Images like these, beautiful and unbidden, come to the surface only when a novelist has immersed himself entirely in his characters out of pity and tenderness, out of love.” —New York Times Book Review

“Ultimately, the significance of Four Freedoms lies in its thoroughness, the sheer specificity with which Crowley has imagined this one small corner of an imperiled planet. . . . An accessible, painstakingly crafted work that offers many pleasures and rewards. It could be the novel that finally brings Crowley the wide attention he has long deserved. One can only hope.” —Washington Post

“Four Freedoms, by John Crowley, perfectly captures an era-WWII America-when the chosen are overseas and the left-behind are granted a rare moment of possibility. Crowley’s extraordinary characters and the poignant, funny, disturbing ways they find to connect with one another make you wish this war would never end.” —San Francisco Chronicle, Top-Shelf Fiction Pick

“War and the sex urge go together,” says Pancho Notzing. The author pictures a nation at war, people uprooted and in motion, as increasing the opportunity and the possibility for sex. Does this seem convincing? If it was so, why don’t we hear about it later?

One of the women in the Van Damme plant says “We’re doing too well out of this war. It’s not right.” Men—and women even more so—suddenly began earning far more money in war industries than they had made during the Depression. What accounts for her feeling that she’s getting something she shouldn’t?

What is it about Prosper that accounts for his success with women? Some of the women don’t regard him as a man—Diane, thinking of going to the club with him, thinks “it wasn’t like you were stepping out with an actual fellow anyway.” Does a relation with Prosper seem to have no consequences?

Late in the book, Connie Wrobleski wonders why the same system that made everything we needed for war can’t provide everyone with jobs producing what people want, not only houses and refrigerators and free health care but fashion and fun. Could that happen, or is it “utopian” in the sense of an unrealizable dream? Connie seems to guess what’s needed for it to work [p292], but says it’s impossible. Is it still impossible today?

Prosper finds it delightful to be in a workplace with no stairs. If you’re disabled, perhaps you can’t get into a building to get a job; but if there’s a ramp and you can get in and get a job or go to school, are you still disabled? Discuss the difference between Prosper’s world and ours today.

One of the women in the plant surprises herself by saying, “Good night, see you tomorrow” to a “colored” woman who works beside her: she’s never said “good night” to a woman of color in her life. Did the tremendous mixing of people of many kinds change Americans’ feelings about race and class? What might have been the consequences in the postwar world?

Vi tries to decide whether Prosper has a cold heart because of growing up with a disability. What does she mean by this? That he couldn’t allow himself to hope or love too much? That the hardness of life for him in that period would harden his heart as well? Is either of these true of Prosper? Do you think he was exceptional at this time?

Connie Wrobleski believes that she’s learned something about men by working at the plant as an inspector: they aren’t always as competent and good at their jobs as they want women to believe, and they don’t want women to know it. Do you think this is something many women might have felt when they entered the workforce?

The doctors who treat Prosper never describe in detail the problems he’ll face. Diane doesn’t want Danny to know her family is Hispanic. Vi guesses what the relation between May and Bea is, but they themselves never say it. Why did people in that time think it was best not to say things such as these? What effect did it have?

In a novel about the past, it’s important that the author is able to capture not only what happened and what the conditions of life were like, but how people thought, the assumptions they made about right and wrong, good and bad, possibilities and dangers. Does the author do a good job in this respect, or was it unconvincing? Does the language of the book help to make you feel you are experiencing the past? Find some examples.

Did it seem surprising that a charity case like Prosper was allowed to spend more than a year in a hospital being cared for? Prosper is not only lucky to have been picked out by a charitable group, he’s lucky in having relatives who can provide for him. His Aunt May gets a couple of glimpses of what might have become of him otherwise. Discuss.

At the end of the book, the four people (and a little dog) heading off for San Francisco to see the United Nations formed might remind us of four characters in a famous American story. Which one? How do the characters match up? Are there other characters and places and themes in the book that seem to relate to that same famous story? Why does the author use this analogy?