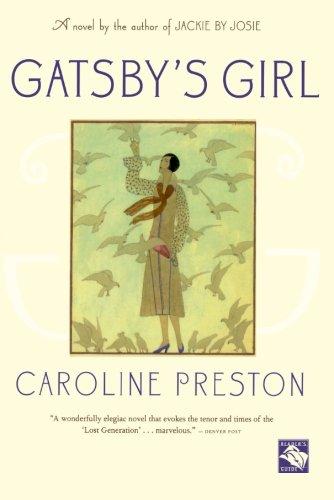 Before he wrote some of the twentieth century’s greatest fiction, before he married Zelda, F. Scott Fitzgerald loved Ginevra, a fickle young Chicago socialite he met during the winter break from Princeton. But Ginevra threw over the soon-to-be-famous novelist, and the rest is literary history. Ginevra would be the model for many of Fitzgerald’s coolly fascinating but unattainable heroines, including the elusive object of Jay Gatsby’s unrequited love, Daisy Buchanan.

In this captivating and moving novel, Caroline Preston imagines what life might have been like for Fitzgerald’s first love, following Ginevra from her gilded youth as the daughter of a tycoon through disillusioned marriage and motherhood.

Before he wrote some of the twentieth century’s greatest fiction, before he married Zelda, F. Scott Fitzgerald loved Ginevra, a fickle young Chicago socialite he met during the winter break from Princeton. But Ginevra threw over the soon-to-be-famous novelist, and the rest is literary history. Ginevra would be the model for many of Fitzgerald’s coolly fascinating but unattainable heroines, including the elusive object of Jay Gatsby’s unrequited love, Daisy Buchanan.

In this captivating and moving novel, Caroline Preston imagines what life might have been like for Fitzgerald’s first love, following Ginevra from her gilded youth as the daughter of a tycoon through disillusioned marriage and motherhood. An engrossing fictional portrait, Gatsby’s Girl deftly explores the relationship between a famous author and his muse.

Caroline Preston is the author of two previous novels, Jackie by Josie, a New York Times Notable Book of the Year, and Lucy Crocker 2.0. A graduate of Dartmouth College, she earned her master’s degree in American civilization at Brown University. She has worked as a manuscript librarian at the Houghton Library at Harvard and the Peabody Essex Museum in Salem, Massachusetts.

“Preston employs immaculate research and a rich imagination . . . A fascinating rendering of the tragedy that was Fitzgerald’s life and of the young woman who was the catalyst for so much of his glorious body of work.” — Library Journal (starred review)

“Should be read by anyone interested in Fitzgerald’s work [or] the times in which he lived.”
— Book Page

“A wonderfully elegiac novel that evokes the tenor and times of the ‘Lost Generation’ . . . marvelous.” — Denver Post

For the epigraph of Gatsby’s Girl, Caroline Preston offers a line from F. Scott Fitzgerald’s classic novel The Great Gatsby: “He talked a lot about the past and I gathered that he wanted to recover something, some idea of himself perhaps, that had gone into loving Daisy . . .” How does Fitzgerald’s comment on Jay Gatsby and Daisy Buchanan also bring to mind Preston’s account of the relationship between Fitzgerald and Ginevra Perry? How might Fitzgerald’s fiction writing have been a way for him to recover something of his own past?

As Preston explains in her author’s note, the character of Ginevra Perry is based partly on F. Scott Fitzgerald’s first real-life love, Ginevra King, and partly on his fictional creation Josephine Perry. Why do you suppose Preston chose fiction as a way to examine the romance between Ginevra and Scott? What artistic freedom does fiction offer that nonfiction does not? How might this have been a different book had it been history rather than historical fiction?

Gatsby’s Girl follows Ginevra Perry from her early teenage years through late life. What is your impression of her at the beginning of the book, during her friendship with Scott? How does your perception of Ginevra change over time? How would you describe her life? Are there elements of tragedy in it?

Ginevra Perry is the daughter of a successful Chicago businessman. What privileges do her father’s status and money afford her? Alternatively, what privations are inherent in her upbringing? How are both Ginevra and Scott shaped by their perceptions of social class?

Why does Ginevra Perry throw Scott over? Can the end of their romance be ascribed simply to the fickleness of youth, or does Preston present other factors that may have contributed to their breakup?

The interplay between fact and fiction figures prominently in Preston’s novel: Scott reinvents Ginevra as various characters in his novels; Ginevra’s son Avery envisions his mother as a real-life version of the film star Myrna Loy; the novel itself offers fictional re-creations of actual events. How does Preston balance reality and imagination in the novel?

Preston gives fascinating details about Chicago society in the 1920s and the effervescent optimism of the Jazz Age. What comment does the novel make on the legacy of the Jazz Age? How does the book work as a commentary on the literary legacy of F. Scott Fitzgerald?

Ginevra marries the aviator Billy Granger, who seems to her to be heroic in ways that Scott is not. Do you understand her choice? Would you have chosen the same? Do you feel Ginevra’s later attitudes toward Billy are justified?

Consider Ginevra’s relationships with Scott, Billy, Julian, and John. Is any single relationship wholly fulfilling? What does each offer her? Which man do you suppose sees her most clearly, understands her best, and why?

Ginevra considers herself a bad mother who is responsible for her son Avery’s psychological problems. Do you agree with her opinion? Do you think Ginevra is changed by Avery’s struggles?

When Ginevra and Scott finally meet again at the Beverly Wilshire in Los Angeles, Scott says to her, “I’ve faithfully avoided seeing you all these years . . . I wanted to keep my illusion of you perfect.” Do you think Ginevra was ultimately worthy of his prolonged interest and attention? Why has Scott so carefully preserved his memory of her? Is he more interested in who she was or what she symbolized?

At the end of the book, Ginevra’s daughter says that her mother was “mute on the subject of F. Scott Fitzgerald.” Why do you think that Ginevra hid Scott’s letters and refused to talk about their romance? What regrets do you think Ginevra felt at the end of her life?

If you have read F. Scott Fitzgerald’s own work, what similarities are there between Ginevra Perry and Daisy Buchanan in The Great Gatsby or Josephine Perry in Fitzgerald’s The Basil and Josephine Stories? What differences are there?

How have your perceptions of F. Scott Fitzgerald and his works changed after reading Preston’s novel? In what ways could Gatsby’s Girl be considered a response to The Great Gatsby?